It’s a tea stall without frills—a thick black sheet of tarpaulin acts as the roof under which Mohammed Taufiq and his only employee make endless cups of tea through the day. When I visit his stall, a group of women in bright saris are waiting for their “cutting chai".

Taufiq is one of the many unlikely heroes of the 26 November terrorist attacks. Thanks to his alertness, hundreds escaped the terrorists’ bullets at the Chhatrapati Shivaji Terminus (CST) station. 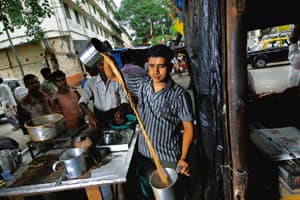 Life goes on: Mohammed Taufiq, whose only source of income is the tea stall, says he earns around Rs200 a day. Abhijit Bhatlekar

His tea stall is across the street from the main gate of St George’s Government Hospital, which lies to the left of the station’s east wing. That night, he was at the CST’s east wing when he heard the first grenade explosion. He immediately raised the alarm, shouting and warning people.

Taufiq is initially hesitant to talk about his experiences. The questions that have come his way in the past year have made him wary. “If you’re going to ask me why I helped people despite being a Muslim, I am not going to talk to you," the 28-year-old says. The question had not crossed my mind, but I realize it’s a valid grouse. Like many other survivors, Taufiq has had to answer all kinds of questions—from the media and from ordinary Mumbaikars.

A year on, Taufiq’s memory of the chronology of events isn’t very clear. The first shot he remembers clearly: He was inside the ticket issuers’ office, which has a glass window, when Mohammed Ajmal Kasab shot at him. The bullet left a deep scar on the granite slab of the office table. But the other two shots that Kasab fired in his direction and the events of the next couple of days are a blur.

Once the terrorists left, Taufiq helped the police carry the injured and dead to hospital. Early next morning, he went back to his stall, wondering whether it was safe to be there, until the policemen on duty requested him to serve tea to the people stranded at the station.

Many of the people Taufiq helped came back to thank him. They brought him clothes and home-cooked food. “When you help someone you do it because you don’t want to see people get hurt, but in the other person’s eye you become a hero." Photographs of a then camera-shy Taufiq were splashed in papers, citizen groups awarded him trophies, and the police and railway officials promised him jobs. Now, Taufiq is media-savvy, talking to journalists with ease—and some cynicism.

He says he has spent the past year filling up application forms for jobs in the police and railways. He had assumed that since he had been promised a job, his lack of education would not be a stumbling block. Today, he feels cheated: “I didn’t ask them for anything. They shouldn’t have made me (feel) hopeful."

Taufiq also spent a few weeks training an actor who essays his role in a telefilm, Un Hazaaron ke Naam, based on the 26/11 attacks. It stars Vinod Khanna and Seema Biswas and is produced by Sanjay Wadhwa of Sphere Origins. “They paid the actor Rs2 or 3 lakh; I got nothing," says Taufiq.

His journey as a seven-year-old from Dhomdi village in Bihar’s Muzaffarpur district to Mumbai with Rs200 in his pocket is straight out of a Bollywood script. But that night at the CST was the only time he has felt like a hero. “At least I got noticed. There were so many people who helped, but didn’t even get a thank you," Taufiq says.