To cinema, with love

For tools, actor Jean Dujardin has some staple pantomime expressions, a twisted, beguiling smile, and some impressive tap dance footwork. His heavy shoulders offset the light air about him. And he has a mutt with a furry nose. With little else, Dujardin makes an utterly winsome star out of George Valentin, the hero of Michel Hazanavicius’ The Artist.

This is a silent film about a silent film star. The literal one-line description sounds exactly like a layered homage to cinema. Much of the film is just that. Charlie Chaplin’s comedies, Citizen Kane, Singin’ in the Rain, Silent Movie—Hazanavicius references generously from the legends. He creates an aged black and white look in some frames, reminiscent of the later Chaplin films. A cinephile can’t miss the elaborate compositions, which only arduous planning can achieve. 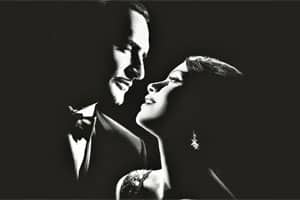 Under the spotlight: Jean Dujardin and Bérénice Bejo, the lead pair in The Artist, set in the late 1920s when talkies came to Hollywood.

The story is simple enough. George’s stardom is on the ebb as the talkies make inroads into the US in the 1920s. The Great Depression is imminent, as is subtly suggested by the movie business on show. The film opens with a premiere night, where George is the dazzling cynosure. He is the hero of A Russian Affair, a silent film which we see unfolding while an impeccably dressed audience sits and watches it in our silent film. It is a simple but remarkable piece, punctuated by close-ups of the self-conscious star with his terrier.

George meets Peppy Miller (Bérénice Bejo), an aspiring star, whom the talkies instantly love. George, in a loveless marriage, falls in love with the starry eyed, feisty Peppy. The film takes its crucial turn when talkies actually get released. Hazanavicius celebrates this with the dizzy rise of Peppy to stardom and George’s gradual alienation. In one of the film’s metaphorical sequences, his camera captures three flights of a staircase which Peppy is climbing. As she meets George on the way, we see that her admiration of him is intact, while his diffidence is painfully evident. Later, after George’s last attempt at redeeming his image by producing a film himself fails, we see him sinking into a quicksand. In another of the film’s most memorable scenes, the director uses sound to express the hallucinating silent star’s hell.

Simple metaphors are required in a silent film and Hazanavicius is keenly aware of the medium’s boundaries and its potential. That is why The Artist is a triumph. It has a worthy predecessor in Mel Brooks’ Silent Film, made in the mid-1970s. True to Brooks’ style, it is a satirical and, in parts, hilarious look at the silent film era. By being silent (the film has one spoken word), it is a comment on the format. Brooks was not interested in employing techniques of the medium best to tell a story. But The Artist would work in any age; the story is its centre. By making it so deceptively simple and moving, the director makes a case for cinema that does not demand too much of its viewers’ senses— unencumbered by digital pyrotechnics, The Artist strips the film experience of frills; you are relatively at peace to react, interpret and feel. It is a refreshingly unmitigated connection between the actors, their situations and the viewer.

The second half of the film is about George’s downfall. He almost burns his house down, unable to deal with the loss of fame. But through all of this, Hazanavicius manages to maintain a balanced tone. Pathos never overwhelms the story’s inherent humour because stardom is not romanticized, but shown with its frailties, absurdities and charm.

It is difficult to imagine Dujardin speaking after this performance; he has surrendered to the medium and mastered how to work it. And yet his tricks don’t show. Bejo, without any dialogues and songs— we know that part of the stardom she achieves rests on the way she sings, but we never hear her voice—makes a jaunty female lead, and the film’s ebullient force that makes good things happen, including its glorious climax.

When you come out of the theatre after watching The Artist, you will have a big smile on your face. Have a look at fellow humans who have come out of the theatre; they will be smiling too. It’s what critic Pauline Kael described in her famous essay Trash, Art and the Movies, “The romance of movies is not just in those stories and those people on the screen but in the adolescent dream of meeting others who feel as you do about what you’ve seen." The Artist is the best that cinema can give you.

The Artist has been nominated in nine categories at the Academy Awards 2012, including for Best Picture, Directing, and Actor in a Leading Role for Jean Dujardin.

Aaron Sorkin and Steven Zaillian are the brightest writing stars in Hollywood. There’s clearly a Sorkin style of storytelling (The Social Network being his latest), which makes virtues out of economy and pace. Bennett Miller’s Moneyball, based on the book, Moneyball: The Art of Winning an Unfair Game by Michael Lewis, is an intimate, soulful film about sports. The crisp, unsentimental writing makes it thrilling. Every scene has additional information, and the personal and the public in the film’s protagonist’s life are perfectly in balance.

Anyone who knows sports knows its anguish, and Billy Beane (Brad Pitt) and the team he manages, the Oakland A’s, know it much too well. Billy is a failed baseball player who is trying to reverse the fortunes of a team that everyone has written off, by buying lesser-known and underrated players. He has Peter Brand (Jonah Hill), Yale economics graduate and spreadsheet whizz, on his side. The other team manager, Art Howe, played by Philip Seymour Hoffman, is embittered and cynical. Everyone else in the baseball establishment is against Billy. Through his daughter who lives with his divorced wife, played by Robin Wright, we encounter his softer side.

Pitt and Hill deliver splendid performances, but the writers are this film’s stars. Without rousing sentimentality and jingoism, they give you a film which is about beating the odds, working against a rigid system and the triumph of the underdog. Moneyball is suffused with wit and vitality; never a dull moment in it.

Moneball has been nominated in six categories, including for Best Picture, and Actor in a Leading Role for Brad Pitt.

My Week with Marilyn

Simon Curtis’ pretty film about Marilyn Monroe has a lot to gaze at, and unfortunately not much of it is what the Hollywood queen was known for. This film slathers one more layer on to the idea that despite her sexiness and command over the film industry, she was a lost little girl. We see not a glimpse of Marilyn’s canny understanding of the medium chronicled in some of the tomes written on her. Through most of the film, Marilyn is neurotic, beautiful and delicate as porcelain. 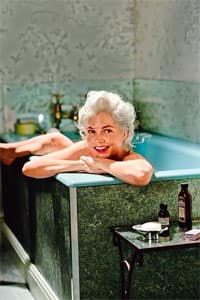 The myth: Actor Michelle Williams in My Week With Marilyn.

Some of the dialogues are tacky and the portrait of Marilyn is one-dimensional and predictable. The all too familiar American canon of emotional damage, the lack of familial stability in childhood, is solely responsible for the insecurity of the “world’s most famous woman". The only real insight we get about Marilyn the star, never a great actor, is from Sybil Thorndike, an ageing actor in the film played with zest by Dame Judy Dench: “None of us knows how to act for the camera, but you do," she tells a woolly Marilyn on the sets.

Williams, a very accomplished actor, has no good writing to help her reach her best, but she does a convincing job impersonating Marilyn’s vulnerability and quick wit. Branagh is not close to the real Olivier, known to be a gentle genius, and Redmayne’s performance is finely pitched.

My Week With Marilyn has been nominated in two category, Actress in a Leading Role for Michelle Williams, and Actor in a Supporting Role for Kenneth Branagh.

These films released in India on Friday.