Thanks for Visiting Mint
You seem to have an Ad Blocker on. Please turn it off in order to continue, or whitelist Mint
HOW TO TURN OFF AD BLOCKER
OR
REFRESH IF YOU ALREADY TURNED OFF THE AD BLOCKER
Home >Mint-lounge >Features >Car tech: The updated Volkswagen Jetta

There is plenty of competition in the premium sedan segment in India, and Volkswagen would have had an eye on its competitors, Toyota, Hyundai and Škoda, before launching the new Jetta. The 2015 version of the Jetta has some interesting features but is also missing a few must-haves.

The in-car infotainment system has an RCD 510 touch screen and eight speakers. The bass is slightly on the low side, but the clarity of the vocals is crisp. The screen’s interface is quite basic, with extra focus on big fonts that are easy to read. The screen is matte, so reflections are not a problem during day or night-time driving. You can connect the system to your smartphone via Bluetooth, and there are also buttons on the steering wheel that let you control the system and scroll through the menu. We think the Škoda Octavia’s infotainment package feels better to use, with a slicker interface and powerful speakers that offer much deeper bass, but the Octavia also costs a bit more than the Jetta.

The new Jetta’s bi-xenon headlamps cannot be missed. There are actually four elements that make up the cluster of lights in each headlamp. First, the LED daytime strip, which makes your vehicle more visible to oncoming traffic. This is particularly useful when driving on countryside roads that do not have properly marked lanes. The main projector lamp is extremely bright and cuts through dust and smog with ease. The third element is the conventional turn indicator, which works in sync with the unique fourth element, a powerful halogen bulb. Every time the indicator is turned on, the halogen bulb lights up to give a clearer view of any objects and vehicles present in the driver’s blindspot and also to warn other road users. While we were testing the Jetta, this halogen bulb actually caught the attention of two-wheeler riders—a success, in our books. The Toyota Corolla Altis currently skimps on this aspect, offering just LED headlamps in the top-line version; the Hyundai Elantra has LED projector headlamps, but without the indicator support.

The fatigue-detection system is another interesting feature. Over time, the car understands the driver’s habits. If it detects something out of the ordinary, such as consistent easing up on the throttle or lane drifting, it will sound an alarm to alert the driver. This feature is more common in luxury sedans that cost almost double what the Jetta does. 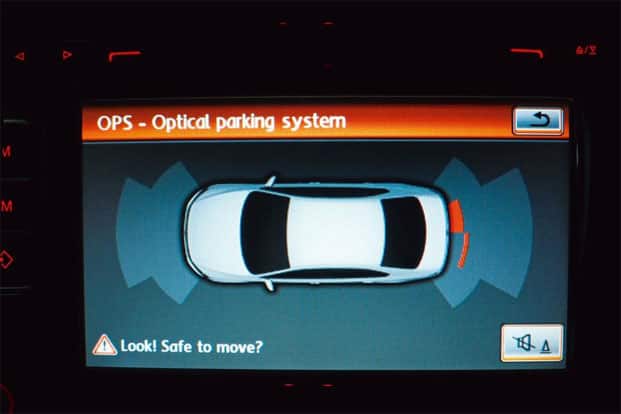 The new Jetta, with its powerful diesel motor, is an enticing proposition. The 2.0 TDI Highline costs ₹ 19.14 lakh (ex-showroom Delhi) while the 2.0 TDI Highline AT costs ₹ 20.17 lakh. The Toyota Corolla Altis ( ₹ 17.54 lakh for the D4-DGL) and the Hyundai Elantra ( ₹ 16.67 lakh for the 1.6L CRDi VGT SX and ₹ 17.84 lakh for the AT version) are the direct rivals. The Altis, even though extremely comfortable, doesn’t have enough gizmos. The Elantra does some things better than the Jetta—the solar glass blocks out ultraviolet radiations, and the silica rubber on the tyres offers better road grip.