It comes closest to international cricket

It comes closest to international cricket

The Indian Premier League (IPL) has not seen a Pakistani player since Sohail Tanvir and his colleagues lit up the inaugural season of the league in 2008. Strained diplomatic relations after the Mumbai attacks in November 2008 led to the disruption of bilateral cricket ties between India and Pakistan, and it is yet to resume. Azhar Mahmood, 37, has managed to get around this to become the first player of Pakistani origin to play in the IPL since the first season. Mahmood played 21 Tests for Pakistan between 1996 and 2007, before moving to England and becoming a British citizen, and he is here in India because of that. Mahmood, playing for Kings XI Punjab, made a crucial unbeaten 33 in his debut match against Royal Challengers Bangalore on 20 April. He was also the man of the match in their next match against the same team on 2 May, getting three wickets. Edited excerpts from an interview:

How exciting is it for you to be part of the IPL? 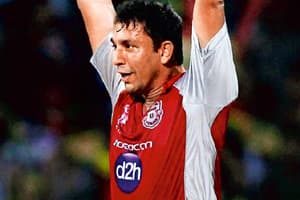 On a roll: Mahmood’s best bowling figures in the IPL have been 3 for 20 runs. By R Senthil Kumar/PTI

Kings XI Punjab have had a rough time so far (the team is fifth in the nine-team league as of Tuesday)...

Kings XI Punjab is doing well as a unit. Unfortunately, (captain) Adam Gilchrist has been injured but our combination seems to be working well. Our win in Mumbai (on 22 April) was a great boost. There also have been some close games, especially the one against Bangalore. In comparison to other teams, we have an inexperienced side. We don’t have our overseas players like Stuart Broad. So we are a young team but we like each other’s company and enjoy each other’s success. There is still a long way to go in this tournament and hopefully, we will keep playing good cricket.

There is obviously a lot of talk around your presence in the IPL. What does it mean for you to be the only Pakistani player in this league?

Everyone has welcomed me—from my own teammates to officials. Wherever I have gone—Mohali, Delhi, Mumbai—the response has been brilliant. Playing in India is like playing in Pakistan and everyone gives us so much love.

How have your friends in Pakistan responded to your playing here?

They say it’s great that at least one Pakistani is playing. But (commentator) Ramiz Raja, (Kolkata’s bowling coach) Wasim Akram, (umpires) Asad Rauf and Aleem Dar are also here, so I am not the only one from Pakistan at the IPL (smiles).

You began with Test centuries against South Africa for Pakistan, then went to England and played a lot of county cricket, and you are here now for the IPL. How would you describe your journey?

It’s been a roller-coaster ride. I’ve seen a lot of ups and downs in my career right up to where I am now. Everyone wants to play professional cricket. That is the best thing you can do. I want to as well but unfortunately, am not able to, which is why the IPL is so important. I am playing with people who play international cricket. IPL is a brilliant platform, so I do not feel I am missing anything.

The team is playing some good cricket, going by the wins against England in Tests and the Asia Cup. The important thing now though is that the game should go back to the country. Also, the PCB (Pakistan Cricket Board) needs to educate young Pakistani players. Now it looks good, with Dav Whatmore coaching the side. He has helped Bangladesh improve and Pakistan cricket seems to be in safe hands.

Twenty20 is fast-paced and needs a lot of energy. So how are players like you keeping up?

People say this is a youngster’s game. If you are fit enough and can perform well, then there is no problem. We have played a lot of cricket all our lives and we play well because of our experience.

Should Pakistani players play in the IPL?

There is clearly no problem with Pakistani players playing in the IPL. They have issues with the contracted players. We have umpires, coaches and commentators from Pakistan here, so there is clearly a problem with the boards. I don’t know what goes on between the two boards and I can’t say anything on their behalf. I wish it gets sorted.

Rupha Ramani is a senior sports correspondent with CNN-IBN.