Kutch | Salt of the earth

Kutch | Salt of the earth

For the third time in as many minutes, the jeep did a 360-degree spin in the mud. I tried to stay as calm as Lakkubhai, the driver of our Tata Sumo, apparently was. Outside, the rain poured down in sheets, converting the entire terrain into slurry. Though storms like these are not common in Kutch, they make up the bulk of the rainfall in this semi-desert environment during the monsoon. 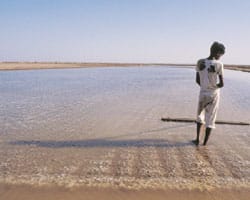 Over lunch, Jugal Tiwari, our professional bird guide, had said: “If it rains in Banni, we’re stuck. There are no roads here and the soil quickly turns into slush." As the skies continued to darken, we were well aware that we were probably 40-50km from the closest metalled road. Jugalbhai hurried us on, and we were familiar enough with his relationship with the land to trust his intuition. This thunderstorm was going to be a bad one.

For the next 2 hours, we held on to whatever we could inside the jeep as Lakkubhai kept his foot on the accelerator in one of the finest displays of cross-country driving I’ve ever seen. Even a second’s lapse of concentration would have caused the tyres to sink into the thin top-layered soil notorious for harbouring quicksand. When we finally hit the road, the high-fives were born more out of relief than celebration.

Despite its suddenness and ferocity, the thunderstorm shouldn’t have come as a surprise to us who set out to explore the Banni. To the vast majority of Indians, Kutch continues to be a mystery land, associated with nothing more exciting than salt pans. More than half of India’s second-largest district (after Ladakh) comprises the saline marshes of the Great and Little Rann (pronounced ‘run’), which border the district to the north and east. The region is so low-lying (less than 5m above sea level) that it gets flooded during the rainy season; as the water recedes and evaporates, it leaves behind vast salt pans, which are the economic lifeline of the region.

The flip side to the commercial exploitation of the salt extraction, however, lies in the disturbances to the local fauna—especially the wild ass, for which the Little Rann is the last bastion—and the floricans, bustards, flamingos and pelicans. Perhaps to compensate for the lack of variety elsewhere, this arid land houses one of the greatest diversity of bird species in the country: 370 at last official count, the list growing annually. The alternate wet-and-dry geology attracts birds, even as it makes the terrain treacherous for animals, humans and vehicles—one reason why Lakkubhai and his ilk can give champion drivers a run for their money.

So, over several days, I hit the road with Jugalbhai, covering villages, semi-desert areas, grasslands, wetlands and tropical thorn forests across the length and breadth of Kutch. The idea was to cut up the district by habitat-type and make individual trips to observe the birds in their own environments. These diverse habitats of Kutch support many endemic bird species (birds with a restricted range) as well as rare and threatened birds. The grasslands of Nalliya and Banni support rarities such as the Great Indian Bustard, the Lesser Florican and the Grey Hypocolius, while the tropical thorn forests are home to the White-naped Tit, Marshall’s Iora and the White-bellied Minivet. The wetlands are home to flamingos, cranes, pelicans and a host of other waders whose populations peak in winter. 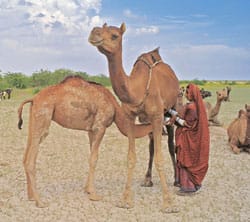 Though all habitats of Kutch have their unique charm, Banni is visually the most stunning. Extending as far as the eye can see, just a few metres above sea level, Banni, with its bizarre sky and cloud formations, grass and sparse vegetation (and sometimes its complete absence) and its wetlands, delivers an impact akin to a blow to the solar plexus. Setting foot on the grassland extending for tens of kilometres in every direction, one is immediately reduced to an insignificance that is paralleled, perhaps, only by the humility imposed by the snow-capped peaks of the Himalayas.

Yet even this vast desolation is not quite desolate, for we came across flocks of camels, herded by men of the Fakirani and Kando Jath tribes. Skilled artisans and worshippers of the holy man Savala Pir, they abide by his philosophy against permanent abodes, and move with their homes and belongings on camels in a perpetual search for fodder and water. Notwithstanding their evident poverty, their hospitality is prompt and heart-felt: Every stranger is greeted with a saucer of chai made with camel milk and conversation, if you can follow their Kandi dialect.

“They come from faraway villages like Gunao, Andharvadh and Valvani, though they never stay too long at any one place," Jugalbhai obligingly interprets for us. “They walk up to 70km a day, surviving sometimes for weeks just on camel milk."

Primitive as the lifestyle may seem, we were thrown by a young herder’s assessment of his life in Banni. How do you like it, we asked, if a trifle patronizingly. “I feel happy and safe here," came the quick reply. “It’s like being in my mother’s lap."

If Banni has its dhands (shallow depressions) that attract flamingos, pelicans and common cranes, the Naliya—a grassland that has more in common with the African savannah than Banni—supports two of India’s most threatened birds, the Lesser Florican and the Great Indian Bustard. But widespread agriculture, irrigation schemes, increased pesticide use, livestock-grazing—the usual spin-offs of “development", in other words—have pushed both species to the brink. We were lucky enough to spot a pair of bustards, one of the world’s heaviest flying birds, in a bush adjoining a cotton field.

As we circled the pair at a safe distance with our cameras, we couldn’t but apprehend that this could be the last time we were seeing them. The photo was precious; the moment, even more so.