The recently released Deus Ex: Human Revolution is the prequel to the original Deus Ex made in 2000 by Ion Storm. Set in 2027 in a future where mechanical augmentations—cybernetic implants—are at the centre of a fierce debate about transhumanism. Themes of hubris, of humanity exceeding its grasp, and of conspiracies by corporations remain a large part of the story, and Daedalus and Icarus are referenced directly to drive home the theme.

The story of the original Deus Ex follows almost 25 years after Human Revolution, in a world where nanomachine implants can turn people into perfect assassins or soldiers. Unlike the other shooters of its time, such as Unreal Tournament and Counter Strike, Deus Ex was a slow-paced game, with the player more likely to rely on stealth, rather than force to stay alive. 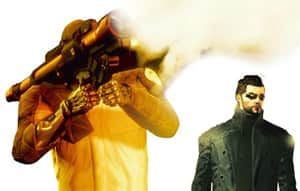 Human Revolution stays true to the formula, but has gained elements from other games too. Stealth and exploration still keep you alive and your interactions with others will have an impact on the way the game plays out. At the same time, the cover system that allows you to hide from guards, and the inventory system for weapons have been improved in many small ways. The biggest change is the addition of regenerating health. Why a cyborg from 2027 can heal itself but one from 2052 can’t is not addressed, but it does improve the flow of the game tremendously.

Exploring rooftops and air vents to avoid guards is a good idea, but players who like a little violence will not be disappointed—there are times when a shooting solution is the only way forward, and Human Revolution handles the gunplay well. The weapons are varied and the audio puts you in the action. Running out of ammunition though—particularly if you’d decided to carry a tranquillizer rifle—is a real risk, and smart players will keep their gunfights to a minimum. Deus Ex looked a generation behind its contemporaries, only mildly ahead of fellow noir sci-fi video-game classic Beneath a Steel Sky, which released in 1994.

There was also terrible electronic music that created noise, instead of atmosphere. Deus Ex was ahead of its time in concept and gameplay, but its graphics and audio were outdated when it released.

On the other hand, Human Revolution will have no difficulty fitting into the landscape of video games in 2011. The game looks polished and the character designs are (mostly) excellent. Eschewing the sepia palette that defines modern first person shooters, Human Revolution has lush tone.

The sound design for the background music is still a hit and miss affair but the work on the guards and weapon sounds has been done thoughtfully. It’s easy to feel the difference between firing a tranquillizer dart and live ammunition; you can also hear footsteps fade away, or the click and whirr of a security camera.

In 2000, Deus Ex introduced a branching, non-linear narrative. All your actions had consequences that could affect your game right away, or hours later. These decisions were organic, not the “save this orphan’s puppy, or shoot the orphan instead" good/evil choices that many games offer even now.

With Human Revolution, they continue down this path, and tie in the “pillars of gameplay", stealth, conversation, hacking and combat, with each affecting the other.

It’s not without its flaws. A major aspect of a shooter is the enemy AI—artificial intelligence—and in a stealth game, this is particularly important to provide the right amount of tension and momentum. This is one area where the flaws in the game become apparent. You can easily turn a tense hostage crisis into a farce with little or no effort.

All you need to do is stand in an open doorway and shoot the nearest enemy, then shut the door. All the guards will gather around the other side of the door and shout, “We lost him! Where did he go! Look for him there!" and mill around for a while, before walking off, confused. A dozen bodies in a heap just outside the door are no clue either, apparently.

That is an extreme example, of course, but there are also some baffling level design decisions, such as placing guards who are looking in exactly the wrong direction to guard their target. This breaks the suspension of disbelief for an otherwise excellent game—it’s clear that the only reason the guard is facing that direction is because a designer wanted to make things easier for the player. But considering that a guard is easy to distract, with a cleverly thrown cardboard box, magazine, trash can or anything else really, why not make him face a direction that would be more realistic?

Despite these flaws, Deus Ex: Human Revolution remains one of the best video games this year. It’s not a flawless shooter, but rather an ambitious game that has set out to do more than others in the genre. Where it falls short is glaring because of how well the rest of the game is executed. Above all, it shares many of the qualities that made the original Deus Ex such an excellent game.

Human Revolution comes at a time when thanks to games like Mass Effect 2, most gamers are finally okay with the idea of managing an inventory, and talking to people for quests, even in a shooter. Given that today most shooters look generic and twitchy, it’s a relief to get a game that lets you think through your actions, and see the consequences of your decisions.