The drumbeats of war

The drumbeats of war

In 2001, photographer Thomas Dworzak began to collect unusual keepsakes from the US-led invasion of Afghanistan. He ducked into photo studios around Kandahar and collected pictures of Afghan men, posed against electrifyingly colour-saturated backgrounds, sometimes in front of fake floral sprays, occasionally with an arm slung around a friend. Many of these were taken as passport photos, the only sort of portraiture permitted by the Taliban’s cultural edicts.

When Dworzak released these in a 2007 book, Taliban, Western audiences reacted with disquiet to the photographs of kohl-wearing young fighters. The Taliban’s restrictions on art and music were so well-known around the world that they had formed a sort of casus belli in themselves. It was one thing to be indifferent to a government said to harbour the masterminds of the 11 September attacks on New York, quite another to be unmoved by the cultural havoc the Taliban had wrought in their country. Just as feminists could find themselves sympathetic to a war against repressors of female freedoms, liberals could understand a war fought to restore Afghanistan’s pluralism. 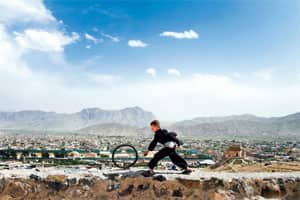 Homeland: Afghanistan’s tradition of poetry, celebrating its landscape and its culture, long predates the Taliban’s crackdown on art and literature. Photo: Ahmad Jamshid/AP

It’s unsurprising that Poetry of the Taliban, a new anthology which collects translated poems published over the last decade on the website of the Taliban, has also met with resistance. On its publication in the UK last month, Richard Kemp, a former commander of the British armed forces in Afghanistan, protested, “What we need to remember is that these are fascist, murdering thugs who suppress women and kill people without mercy if they do not agree with them, and of course (they) are killing our soldiers."

One imagines Taliban commanders saying much the same thing about pirated DVDs of Hollywood movies. Having said that, the poems in this collection can, and will almost certainly, be read as salvos in an ongoing war of ideology. Its editors, Alex Strick van Linschoten and Felix Kuehn, stress the importance of engaging with the Taliban’s cultural output “on its own terms"—unlike Dworzak’s photographs—“not for their novelty value, but as a way of understanding who the Taliban are". Some of these poems were initially translated for an English website, AfghanWire, begun by Kuehn and Strick van Linschoten to amplify voices in local Afghan media. The translators of the 235 poems in this volume, Mirwais Rahmany and Abdul Hamid Stanikzai, are based in Herat and Kabul, respectively.

To those coming to Afghan poetry for the first time, these poems, although they vary greatly in quality, will evoke several familiarities. Sometimes they are classically sonorous: “But listen to this speech of mine and understand that/I am still standing even after my death," ends an early poem, I Am Still Talking. “Go and beautify the red blood,/There are more flavours in its water than just honey," writes Badar Bakhri in Neck.

War deadens the deep comfort taken in mountains, streams, birds in flight—a contradiction known, perhaps, to soldiers everywhere. The collection reveals a strange fluctuation between the rhythms of the hyperstylized, romantic aesthetic of the Persian ghazal and the more modern contexts of nationalism, mechanized warfare and political radicalism that underscore the trench poetry, and the musings on religion. This, at least, will be familiar to post-colonial readers of poetry everywhere, especially in the South Asia of Muhammad Iqbal, Faiz Ahmed Faiz and the Progressives.

The war is ever present, but so is its history. In a wonderful preface to the book, Faisal Devji writes about how present British colonialism is in the memory of these poems. My favourite, by “Janbaz", is an invocation to Malalai of Maiwand, the heroine who rallied Afghan troops to war in the third Anglo-Afghan war in 1880. “It was our Afghan white, white widow/the one who was martyred by the crusaders/it was Helmandi’s white, white bride." In a book that otherwise reflects the basest patriarchal expectations of women (poets are often shocked that the delicate flowers of the Afghan nation can occasionally be found talking to strange men and dressing immodestly), Malalai’s ubiquity in the war poems is a complicated reassurance.

I’m not sure poems can help us understand who the Taliban are, since literature and anthropology are not the same thing. The existence of this collection, however, may tell us something about who we, its readers, are, and our expectations. I do wish these translations had been undertaken by bilingual poets, since this book’s biggest flaw is that its language is far too stiff to give us any sense of the poems’ native music (who would really be moved by a line like “Where did he go? the historical battlefield figure").

The great poems in this collection do work on their own terms, not because they are free of cant, but because they remind English speakers of the way in which every martial mythology relies on the same swinging rhythms, the same grand passions, the same cherished notions of home and nation.

“O homeland of beauty, be well!" writes an anonymous poet. “You have mountains,/You have full seas./You have beautiful deserts,/You are a piece of paradise; be this paradise!" That’s as “sea to shining sea" as it gets.

Poetry of the Taliban was published in the UK by C Hurst & Co. (Publishers) Ltd in May. The collection will be released in India by Hachette India on 15 June.