The story of Indian democracy sometimes plays like a soap opera. The latest episode—not the uplifting kind—involves a confrontation between the government and a mysterious something called “civil society". Can this “civil society" cavalcade in to rescue a flailing Indian democracy—that once-proud system now being abused by a villainous governing class, ever more smug in its power and feckless in the face of corruption? Tune in for next week’s instalment of The Indian Conscience-Keepers’ Capers. 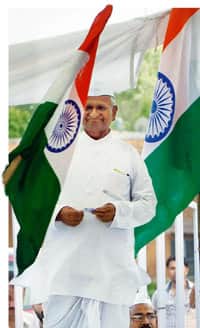 This apparent “revenge of civil society" against the political class has provoked two opposite reactions. Some commentators have been enthused by what they see as a new public engagement, especially by the urban educated elites. Long apathetic, they have in recent months bridled at India’s high-growth corruption sectors (CWG, 2G—not exactly compatible with our G20 image), marching the streets of downtown New Delhi and—more consistently and energetically— tapping exhortatory SMSes into their cellphones. Their heroes are a breed of new, unpolitical men.

To other observers, such elite agitations led by populist mavericks are at once a symptom and a cause of the weakening of our democracy. These observers fret about the popular embrace of figures who indulge in what B.R. Ambedkar called the “grammar of anarchy"—non-constitutional methods, outside the formal spaces and arenas of politics. In this view, unorthodox populist movements threaten to undermine and trivialize Indian democracy, and to propel its beastly slouch towards authoritarianism.

On the malignancies of our current government, both sides agree, but the fretters find the remedy just as noxious: an activism that seeks to substitute the political process with a more direct, populist control over politics.

I find a dash of truth in both these positions. It is a fine thing when previously indifferent citizens call special protests to draw attention to misgovernment. Long may they agitate. And if some of the protest leaders have been opportunistic in their manoeuvrings, so be it. At certain points in a country’s history, even blatant opportunism can produce good effects; just as a sense of moral purity and aloofness can sometimes encourage the worst opportunism.

We the people: Crowds at a one-day fast at Rajghat on 8 June; a candlelight vigil in support of Baba Ramdev. Manvender Vashist/PTI & Aman Sharma/PTI

This year we appear to have moved beyond a mere distaste for politicians and public officials towards a distrust in the very institutions and procedures of constitutional democracy. That speaks of a new development: a weakening of the legitimacy of our democracy, of the very system whose success we have become accustomed to celebrating.

We can no longer take this system for granted, and we have to recognize that there’s a point at which the damage takes on a systemic character. In that sense, the invocation of civil society against the state is a risky proposition.

What is this civil society? Does it have magical remedial properties? As journalists study Wikipedia in search of definitions, it’s worth insisting on a basic point. It is mistaken to think of civil society as if it were a thing, to substantialize it: either in the form of particular people, groups, or kinds of association. For all these interpretations hint at the notion that civil society is a source of authority that stands outside politics, somehow precedes it.

Civil society is more aptly seen as a special kind of political capacity: a capacity to make the conduct of collective human life better on the whole. It involves a capacity for civility, for restraint, which is an extremely complicated human social achievement. And it involves a capacity to create and sustain society, to conceive and arrange social life as a meaningful, rule-bound activity that is governed by laws. This sounds abstract, but the important point is to see it as a capacity and not a thing.

No more than government or the state, civil society is not the repository of any special virtue. It does not necessarily possess benign intentions or effective instruments of action. It is no more a land inhabited by angels than are the corridors of the state. Goodness and virtue are seldom natural commodities—they are not the magical possession of that proposed extra-political Eden, civil society. They are, more typically, the product of social effort and political struggle.

Politicians, rarely righteous, are inevitably prone to self-righteousness. So it is with ours today, as they bluster and out-shout one another on the talk shows about what is right for India, or as they cultivate an aloofness and silence that suggests it is beneath their dignity to be held accountable, and seek to insulate themselves through the protections of office. That smugness in turn incites angry reaction among the wider populace: It turns them away from politics, in pursuit of other solutions. Thus the dreams of rational technocracy, of revolutionary violence, of a moralized civil society—all hoped-for remedies for political ills. 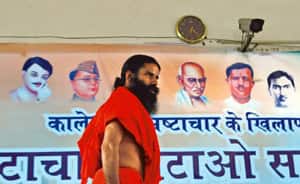 In fact the problem may even be structural. Our electoral democracy and our economic growth have combined to place us in an awkward double bind, and suggest a vicious spiral. On the one hand, the fruits of liberalization fall not just to the private sector but also to government. As the overall economy grows, so too does the government’s disposable income. This makes the stakes of gaining access to the offices and patronage of government higher than ever. It necessarily leads to more electoral competition for office, and it requires competitors to devote more energy to honing the skills needed for electoral victory; skills that are not easily transferable to the different task of governing well.

On the other hand, precisely because government now has more disposable largesse, it requires effective governing. But the politicians who have managed to gain office are the ones who are best at winning competitive elections, with a different skill-set from that needed to govern effectively.

And in a further twist, electoral politics in an age of economic growth will also see a vast expansion in the opportunity for corruption. There just is more corruptible material all round. That’s precisely what we are seeing—what is rightly provoking a season of outrage.

Legitimacy in the modern world does not belong to anybody naturally. It has no organic source: it is to some degree always contested. It has to be worked for and sustained.

In this sense, the current stand-off between government and those who profoundly dislike it is more significant that just an indictment of the performance of current office holders. It suggests something more endemic: a weakening in the legitimacy of our democracy, our constitutional pact, itself.

Sunil Khilnani is the co-editor of Civil Society: History and Possibilities, and director of the India Institute, King’s College, London. Visithttp://www.kcl.ac.uk/aboutkings/worldwide/global/indiainstitute/index.aspx

Write to him at publiceye@livemint.com