Ask Ritu Dalmia about the popularity of Italian cuisine in recent years and the chef-owner of Café Diva, New Delhi, one of the earliest stand-alone Italian success stories in India, has an anecdote to share. On her way to the Jaipur Literature Festival last year, when she stopped at a dhaba in the Rajasthani heartland, the first thing she noticed was a sign proclaiming penne arrabiata on the menu.

Considering that Italian is globally among the most popular cuisines, if not the most popular, and has come to dominate the domestic eat-out scene in the last decade, it’s not surprising.

Journalist and Lounge food critic Vir Sanghvi commented on the trend in a column last year in Brunch, Hindustan Times’ weekly magazine and predicted that the craving for Italian would only grow in the coming years (Mint is published by HT Media Ltd, which also publishes Hindustan Times). An online survey by the Indian edition of ForbesLife magazine published in its winter issue corroborated the prediction—at 39%, Italian was the most popular choice while eating out, just ahead of Chinese (38%) for the first time. With even the neighbourhood kirana stores stocking multiple varieties of pastas—durum wheat, semolina, whole grain, organic—and Indian companies hardselling ready-to-eat macaroni and cheese or fusilli in sour cream, the popularity is explained partly by the fact that the basic premise of the Italian diet—carbohydrates and a side of vegetables, with some sauce—could well be a description of the food served at our homes, as Dalmia and Sanghvi point out. “What is pizza essentially but a big roti with subzi or meat on it," says Sanghvi. Indians, he stresses, are not meat-and-potatoes people; French and British cuisines, therefore, hold little appeal to the average Indian.

“The flavour palates of Indian and Italian cuisines are also quite similar," adds Pauro, whose father was Italian. “In both, the flavours come from the fresh ingredients like tomatoes, garlic, onion, peppers, herbs, spices and olive oil." Another factor that boosted the fortunes of Mediterranean cuisines in general, according to restaurateur A.D. Singh, was a degree of familiarity carried over from the Raj-era “Continental" cuisine. “The old supper clubs served a wide swathe of European cuisines, though they lumped it all as ‘Continental’. So there was that comfort factor, which would not be there in, say, a Japanese cuisine restaurant," says Singh, who was among the earliest to bet on the trend with his 11-year-old Olive brand of restaurants in Delhi, Mumbai and Bangalore. “Though all Mediterranean cuisines are popular, Italian is the most in demand because of the number of options available."

A point Dalmia underscores as well. “Lebanese or Greek or Spanish food too bear similarities with our cuisines, but where do you get the variety of ingredients that is in the Italian cuisines? As a chef, there are only so many options to choose from, if you cannot serve beef or pork or seafood," she says. It is what helps the cuisine score a significant point in India: It offers the widest range for vegetarians. The point is further underlined by Giovanni Federico Autunno, who ran the vegetarian-only restaurant Little Italy in Juhu, Mumbai, from 1997-2001 before moving on to start his own restaurant brand with Don Giovanni.

Versatility on a plate

“It is an incredibly flexible cuisine—you can adapt it to suit any taste without compromising on the authenticity," says Dirk Holscher, executive chef at Hyatt Regency Delhi, which runs the Italian restaurant La Piazza, famed for its wood-fired oven pizzas. 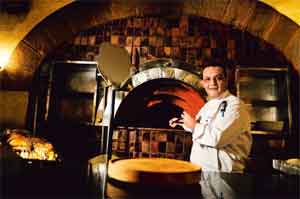 The pasta at La Brezza is made fresh and does not use eggs— another concession to Indian dietary taboos. But this concession too is strictly in accordance with Italian pasta-making traditions. “Eggs are used in northern Italy to harden the dough. In the south, the flour is of a better quality, so you don’t need eggs. It’s perfect for vegetarians," he says.

Even a restaurant like San Gimignano at The Imperial, New Delhi, where the menu is focused on the colder northern Italy—based on meats such as pork, beef—had to make a few exceptions. “We had to add fish dishes from Milan and the south. Anchovies, sardines, etc., keeping in mind the clientele," says executive chef Willi Haueter.

The northern cuisine from around Florence and Milan are heavier, use butter and bear more in common with the French cuisine of which it is the precursor, unlike cuisines from central and southern Italy, such as Sicilian, Neapolitan and Calabrian. An easy differentiator, for the uninitiated, of southern and northern Italian is the colour, adds Haueter. The northern dishes are mostly monochromatic, in sharp contrast to the southern cuisines, bursting with reds, greens, yellows of the tomatoes, peppers and fresh herbs.

Giovanni adds that in the olden days, before the invention of refrigeration, when the meat would start smelling after being kept for a few days, people would add spices to mask the smell. He says that’s the reason why cuisine from the south grew to be spicier and, therefore, more suited to Indian tastes.

Fresh off the farm

When it comes to sourcing ingredients in India, Italian restaurants have it easy, unlike, say, a Japanese one, with much of the Italian essentials—tomatoes, garlic, mushrooms, spices—being intrinsic to Indian cuisines. Though the variety is limited, most chefs are unanimous on the high quality of the local fresh produce. “The choice may be limited, but the locally grown zucchinis, cauliflower, peppers are as good," says Holscher of Hyatt.

La Piazza imports ingredients that are “absolutely the best" in Italy. “If we need Parmesan, we will use only Parmigiano Reggiano; that’s important to us. So we import it. Similarly, a mozzarella has be Italian. Our pastas, olive oils and the double-zero flour too come from Italy. They are crucial to a good pasta, you have to have it fresh," Holscher adds.

It’s a policy most other restaurants follow, though Haueter says even dried pastas available in the markets are good enough. “It’s a myth that only freshly made pastas make the best dishes. In Italy, it’s a common sight to find ladies sitting in the sun and drying pastas."

The more Indians travel, the more they are willing to experiment. “Now, clients accept pasta al dente. In my Little Italy days, they would send it back because they thought it was uncooked," says Giovanni.

History also plays a role in the Indian’s fondness for the Italian, says Pauro. “Both India and Italy sat on major trade routes; both had thriving foreign trade cultures. Both nations’ cuisines have liberally borrowed ingredients and techniques from other cultures and made them their own."

It also gives birth to a tandoori paneer pizza.Arun Janardhan contributed to this story.