Sujoy Ghosh’s Kahaani begins in Kolkata’s splendid chaos. This reviewer has spent a few memorable years in the city and is biased towards it. It’s a city where if you lose valuables on a pavement, 10 pedestrians will be looking for them along with you. If you don’t appreciate it, they will make their offence known to you. It’s a city where change is not visible, but millions of human beings and automotives are in perpetual movement every day, negotiating their space and value in the giant street theatre. 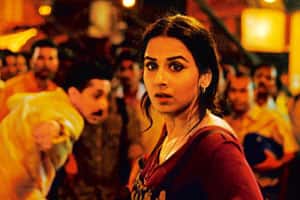 No stereotype: Vidya Balan gives yet another convincing performance

A menacing, bespectacled villain named Bob Biswas pushes a woman to die on the Metro tracks. The same woman has a sympathizer in a young policeman who addresses her non-existent husband as “dada" and handholds her through the city’s dirty alleys. The sweeping shots of Kolkata—and the eloquent close-ups—make sense and add to the drama of the film, because the city is recognizably in the now.

Recently, director Aparna Sen recreated Kolkata of the 1970s for her film Iti Mrinalini, and in interviews she has said that for a city which is dismissed as being stagnant, a lot had changed, making it difficult for her to find authentic locations. This is many years after her own 36 Chowringhee Lane, where nights and loneliness defined Calcutta’s contours, and even longer after Satyajit Ray’s fluid mapping of the city through cawing crows perched on criss-cross tram lines in his masterpiece Mahanagar. Balan and Parambrata Chattopadhyay in Kahaani

The story of Kahaani, written by Ghosh and Advaita Kala, is acutely flawed. There are gaping holes that leave many incidents and places in the story unexplained. The time lapses are often unjustified, and the central relationship in the film has no justifiable arc. Yet its extremely evocative visual grammar, and confident, convincing performances make Kahaani worth a watch.

Vidya Bagchi (Vidya Balan), a heavily and awkwardly pregnant techie, arrives in Kolkata from London in search of her husband, Arnab. The black-and-yellow Ambassador takes her first to the Kalighat police station and then to a hotel where Arnab, also evidently a software professional, was supposed to have lived when he was in the city on an assignment, before he went incommunicado. After her own investigations, which take place in shockingly banal and childish ways, Vidya finds out that her husband resembled a man named Milan Damji who was responsible for a poisonous gas attack in the Kolkata Metro. Will Vidya find her husband at all?

The search takes her to unusual places. Parambrata Chattopadhyay plays Rana, a policeman, whom we see accompanying Vidya on her adventures, which often involve hacking the computers of the National Data Centre, Kolkata (an entity entirely unexplained in the film), and unearthing tattered files from an office that has no electricity and human habitation. It also takes them to a police informant who happens to be an idol-maker. Most of these don’t make perfect sense, except that in the process we see a lot of Kolkata like it has never been shown in Hindi films.

Balan’s existence, and indeed her flourishing, says something about the Hindi film industry finally breaking away from the “heroine" mould. Vidya Bagchi is not a “heroine" by any benchmark. She is awkward and sly, and she shakes her right leg often while seated. This is yet another convincing performance by Balan—it is a brand new life for her, far removed from anything she has done before.

The other two big performances, Nawazuddin Siddiqui as an intelligence agent and Chattopadhyay as Rana, are also well-realized.

Kahaani is one of those rare films which makes you want to wince once in a while, but keeps you hooked throughout. It is not a consummate thriller because it does not have the precise logic and rigour of a great crime thriller. But you can’t help but engage with the lead character. The intrigue around her thickens as the film progresses, and until the very end, this film will make you wait for the climactic scene set in vermilion-soaked Kolkata during Durga Puja.

Kahaani released in theatres on Friday.