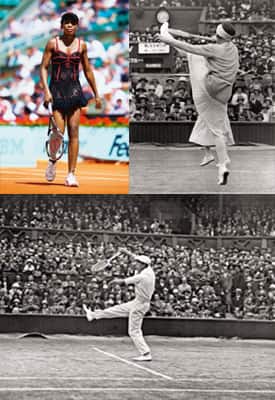 For much of its early history, tennis was an excuse for aristocrats in Europe to show off the latest fashion on court. All the way till the beginning of the 20th century, women wore voluminous skirts, corsets, frilly necklines and unwieldy hats to play tennis. It was only after World War I that tennis fashion began to shift towards the more practical—not surprisingly, in the face of stiff opposition.

The legendary French player Suzanne Lenglen won the first of her 12 Wimbledon titles in 1919 wearing a knee-length dress with three-quarter sleeves, and a bandeau instead of a hat that became an instant hit with women players of the time. But the dress itself was received with shock, with many spectators reportedly walking out of matches that featured Lenglen.

In fact, in the early 20th century, the greatest women players of the era were as involved in making tennis history as they were in revolutionizing what was acceptable as women’s wear. May Sutton, who won three majors, including two Wimbledon titles, in the early 1900s, often turned up on court in a white sailor suit with a knee-length skirt and a white visor. In 1949, American player Gertrude Moran wore white lace-trimmed underwear that was visible under her skirt at Wimbledon. As usual, the crowd was shocked, while court side photographers resorted to lying flat on the ground to get a good shot of the knickers. At the 2002 US Open, Serena Williams caused a stir in her short black catsuit, but she had been pipped to that post by Anne White in 1985, when she appeared for a Wimbledon match in a white, full-body catsuit. She was asked by officials not to wear that dress for the next match.

Innovations in men’s tennis wear, not surprisingly, haven’t been nearly half as exciting. In the early 20th century, white flannel trousers and full-sleeved shirts were de rigueur. The indomitable French tennis star Jean René Lacoste, who won seven Grand Slam titles, designed the classic “polo" shirt in the 1920s, and wore it consistently on court. In 1933, Lacoste, after retiring early from tennis due to poor health, founded a sports clothing company with his friend and designer André Gillier called La Societe Chemise Lacoste. Lacoste’s polo shirts, with the famous embroidered “crocodile" on the chest, have since become a design classic beyond the tennis courts.

Verbal duels in tennis are always fun, but a player giving a mouthful to a machine?

That’s Romanian tennis legend Ilie Nastase for you, on his hands and knees on Centre Court at the 1980 Wimbledon Championships, screaming at a little metal box placed courtside. “Were you made in Russia?" boomed Nastase at the unperturbed box, which had just beeped to indicate that Nastase’s serve had gone outside the service line.

That box, in fact, was made in England. Called Cyclops, it was making its debut as an electronic umpiring aid at Wimbledon, the first such device used in a Grand Slam.

The Cyclops system consists of a series of infrared laser beams projected at ground level from the box to a receiver device across the court and then to a computer. The series of beams are aligned to accurately determine if the ball was inside the service area. Conflict: Federer (right) disputes a line call during the semi-final against Novak Djokovic at the French Open in June. Matthew Stockman/Getty Images

In 1990, the US Open flirted briefly with another system called Tennis Electronic Lines (TEL), used to monitor baseline activity throughout a match. TEL used a system of metal sensors under the court lines which reacted to a tennis ball with metallic fibres, but the system had to be abandoned because it also reacted to players who had metal eyelets in their shoes, or metallic parts in their rackets.

Cyclops did have a predecessor though—the first electronic line-call device was used in the finals of the Men’s World Championship Tennis in Dallas in 1974—but despite rave reviews, the system never got the green light.

The Cyclops is still in use, but it has lost its place of honour on the Centre and show courts to the Hawk-Eye, a system well known to cricket fans. In tennis, Hawk-Eye uses 10 on-court, high-speed cameras linked to a central computer that accurately tracks the movement of the ball. The Hawk-Eye made its debut at the 2006 US Open, and by 2007, it made possible for players to challenge the decision of the umpire for the first time in tennis history. Again, the 2007 Australian Open was the first Slam to allow players to challenge an umpire’s line calls, which were then referred to the Hawk-Eye.

Naturally, there have been man-machine conflicts with the Hawk-Eye as well, most famously during the 2007 Wimbledon final between Roger Federer and Rafael Nadal. During the match, Federer did not play a ball he thought was beyond the baseline. The line judge and the umpire concurred it was out, as did a television freeze frame. But Nadal challenged the call, and the Hawk-Eye showed the shot in. Federer lost his temper completely, and told the umpire that the machine was “killing him" and demanding that it be switched off immediately. The Hawk-Eye won that round, and stayed on.

Jean René Lacoste was much more than one of the most celebrated tennis players of his time—he was a tireless and pioneering inventor who can count the timeless “polo" shirt and the ball-throwing machine, now widely used in many sports as an indispensable training tool, among his many creations. But his greatest contribution to tennis is the first steel racket he invented in 1963. Racket play: (above) A modern racket (Kirsty Wigglesworth/AP); and McEnroe with his wooden one (Central Press/Getty Images).

Lacoste overcame that problem by passing the racket strings around metal wires looped to the frame. Lacoste’s invention was marketed by US manufacturer Wilson as the T2000 and it had an immediate impact on the game. American tennis legends Jimmy Connors and Billie Jean King began using the T2000, and won several Grand Slams between them from 1966-78. Soon, metal rackets made of hollow aluminium-alloy extrusions and carbon steel became commonplace, and the heavy and unwieldy wooden racket began to disappear.

Not only were the metal rackets lighter than the wooden ones, the increased stiffness also meant more power was generated on hitting the ball. Wooden rackets also had a standard 65 sq. inch head, but the increased pliability and strength of metal rackets allowed for much larger heads—90 sq. inches is the typical head size of rackets being used now, allowing players to swing much harder than before without the fear of mishitting. In the early 1980s, yet another breakthrough was made in racket manufacturing with the introduction of carbon fibre and other materials such as glass fibre, boron and titanium, with each new innovation making for lighter and stiffer rackets.

In the 1960s, tennis was a serve-and-volley game. There were only two ways to win a point— play long rallies until one player made a mistake, or approach the net to kill off the point. Hitting forehand winners from the baseline was just not an option. The metal, and later the graphite rackets, changed all that by the 1990s, when baseline winners became the norm.