Bengaluru to Pollachi: Beating the heat

At the foothills of Anamalai, Pollachi in Tamil Nadu offers a chance to spot the Nilgiri tahr

Tamil Nadu? In this heat?" My mother questioned my seemingly ludicrous pick for a weekend break from Bengaluru in June last year. After all, April and May are the region’s hottest​ months, with June bringing a few relieving showers. The best time would have been from November-February. What I had held back—to surprise her later—was that the place I was talking about was at the foothills of the Anamalai Hills, wedged in a shady coconut plantation, and held the promise of walks in a mango grove, Ayurvedic massages and cool air. I sweetened the deal with a mother-daughter driving trip—she worried that we would be travelling almost 395​km one way by ourselves but I knew her worries would abate when she saw that there weren’t many lonely stretches on the route.

The best part about this route is that most of it is in Tamil Nadu, which has excellent roads. We started early, keeping a 7-hour window to reach Pollachi town. The route is dotted with towns like Dharmapuri, Salem and Erode, so clogged roads are expected on these stretches. Other than these, paddy fields and small villages sprawl on either side of the road. Construction work slowed us down just before Krishnagiri (90km from Bengaluru), but it was easy to pick up speed after that right up till Bhavani, our lunch pit stop. Bhavani offers an unequivocal reason to stop here: the Saravana Bhavan restaurant, which offers lip-smacking vegetarian food.

A further 130km down the road, we were in Pollachi.

The Great Mount Resort Coco Lagoon, in the middle of a coconut grove with elegant cottages around a small lagoon, was our pad for the next two days. 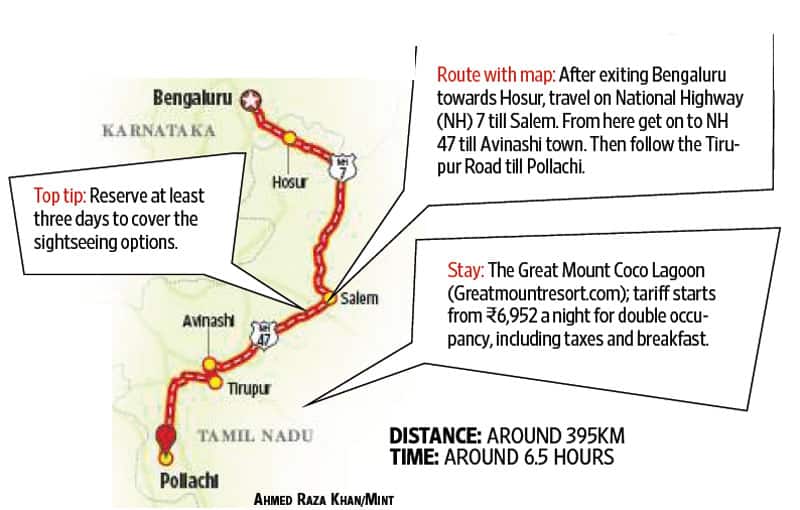 We started Saturday by reserving a few hours for some relaxation at Vaidya Sutras. Post lunch, we drove 55km to reach the tiger reserve. The place is known for its flora and fauna and the Nilgiri tahr, which is found only in the southern Western Ghats. Visitors can opt for jungle treks, an elephant camp, a visit to the nature interpretation centre and the Thunakadavu Dam, but we kept the trip short by signing up only for a 3-hour jungle safari ( ₹ 150 per person; Parambikulam.org).

Back at the resort, a local meal of vegetarian dishes, including Poondu Vazhal Kuzhambu and Chettinad Karaikudi curry, and elaneer pudina (tender coconut and mint) awaited. We ended our meal with Pollachi elaneer payasam, a dessert made with tender coconut cream.

The next morning included another short drive—65km to the Crystal mango farm in Palani (it belongs to the resort owners). My mother and I are both fascinated with the farm life and wanted to know more about GAP (good agricultural practices) farming and meet a shedful of Kangayam cows, a native breed of Tamil Nadu. GAP is a US certification for farming that is done under prescribed norms to produce safe and nutritious food. We walked along the muddy pathways lined with mango trees and through a chikoo copse.

Back at the resort, four “warriors" were getting ready for the stage. Every evening, the resort organizes a short programme showcasing the local martial art Silambam, which dates back several thousand years and is embedded in yoga and meditation. As the skilful performers completed a set of swift movements with their bamboo sticks, the weekend outing too came to a close.

It was time to get some rest for the journey back to Bengaluru, with only one thing on our minds: When was the next long weekend, so we could come back to cover the rest of the sights of Pollachi?