Jamini Roy, Akbar Padamsee, F.N. Souza and M.F. Husain dabbled in it in the early stages of their careers, but landscape art has never been a prolific genre in Indian art.

The Delhi Art Gallery has now put together an exhibition of landscape art, early 18th century onwards, from the works in its collection. Kishore Singh, head of exhibitions at the gallery, says: “Art, for a long time, was not decorative for Indians. We did not have the culture of putting it on the wall and saying ‘look how fabulous is this image...,’ which is why we’ve had no culture of still life or landscape art." Another reason, he says, could be that for many artists landscape was always “just a background element to a story that was developing". 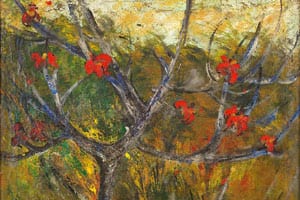 A wonderful example is a 1929 scroll by Bishnupada Roychowdhury titled Baro Mase Tero Parbon. The 78ft-long work opens with a depiction of the creation of the universe, moves to forests, wanders into the countryside, into a flowing riverscape, and then into village settlements, showcasing the lives of villagers through Bengal’s festivals.

Landscape art came to India at a time when it was on the decline in the West. Artists such as Thomas Daniell and William Hodges were among the first Western artists to work in India in early 18th century.

It’s only later, after the British had set up art schools and when artists like J.P. Gangooly, Abanindranath Tagore and Nandalal Bose took to landscapes, that the genre reached its zenith. The high point of landscape art was undoubtedly at the turn of the 20th century, says Singh.

“The realist style continued till the Bengal revivalist school rejected it, saying this is not a part of our heritage or legacy, and started looking at the Asian, therefore largely the Japanese and Chinese wash styles," says Singh. “Artists in this period (the early 20th century) did paint the landscapes but these shrunk in size and incorporated wash styles," he adds. One of the featured works by Bose, a 1945 Untitled (Two women under the trees) watercolour and gouache on paper, is a perfect example of how effectively he used the Japanese wash styles. “Post the Bengal school, you have the Santiniketan style, which kind of makes this genre more minimal and expressionistic," adds Singh.

In the 1940s, the Bengal school too got rejected for being romantic and overtly sentimental. “The Bombay modernists rejected the Bengal school for a totally different language which was more bold, looked at the West, yet broke away from the realistic school," says Singh. Some of the artists who worked on landscapes in this period included Souza and H.A. Gade.

In independent India, landscapes didn’t find much favour. While most artists experimented with it, infusing it with realism, expressionism, even moving to abstract works, few artists really developed their own styles within this genre. Perhaps the most prominent names are Gopal Ghose, who liked to call himself an “Indian Wanderer", and later, Ram Kumar and Paramjit Singh.

In recent years, one of the more significant elements of landscape art is the documentation of urbanscapes, as seen in the works of S.K. Bakre, Bikash Bhattacharjee and K.S. Kulkarni—or a rare work of Husain’s. In one of the works in this show, Manu Parekh mixes the urban landscape and fantasy, with the city of Banaras (now Varanasi) as his muse.

“Photography has now ensured that landscape art in its pristine format is never going to resurface. But the environment around will always be a part of art and how an artist views it and responds to it still remains important," says Singh.

Indian Landscapes: The Changing Horizon will be on view till 29 September at the Delhi Art Gallery, Hauz Khas Village, New Delhi. Prints start at ₹ 25,000, watercolours at ₹ 1 lakh, and some works are priced at ₹ 1 crore and above.