Highly enviable though cheese legend Will Studd’s career is, it’s not a job any old fromage freak can do. Burying 80kg of Roquefort, as he was ordered to do by Australia’s food safety authorities, is a task that would have withered the souls of most cheese lovers. But Studd, who describes it as a low point in his life, soldiered on. Due to his efforts, his adopted country of Australia (Studd is British born) reversed an 11-year ban on Roquefort, a French blue cheese made from unpasteurized milk.

Studd, who in 2000 was named the Maître Fromager (master of cheese) by France’s Guilde des Fromagers and is the guild’s only “ambassadeur", is the host of a new TV show, Cheese Slices. He talks to Lounge about mould, bacteria and other related stuff cheese lovers revere. Edited excerpts.

Which is the best cheese for a) fondue, b) cheesecake, c) pizza, d) a sandwich and e) soufflé?

For a fondue, you can use any cheese. I like the traditional idea of Emmental and Gruyère. You can also add some Raclette. I’ve had a fantastic fondue with a combination of young and aged Marcel Petite Comté. There’s a difference between the French and the Swiss way — one of them uses wine and cheese, and the other adds in arrowroot and Kirsch. Spinning the wheel: Studd recommends white wine with cheese; tannins in reds fight with the fats in some cheeses.

I’m not a great fan of cheesecake, so I’ll just stick with cottage cheese and be done with it. Most cream cheese is industrial; it’s very rare to see great farmhouse cottage cheese. Even I, actually, don’t see it quite a lot.

For pizza, I like the Italian way with four Italian cheeses — a Gorgonzola, Taleggio, Parmigiano Reggiano and Pecorino. But the two finest pizzas you can make with cheese are a cave-ripened Taleggio pizza; as you pull it out of the oven, grind some pepper across the top. The combination of the Taleggio, the pepper and the pizza — the taste is just whoosh. The cave-ripened one has an aromatic taste and it’s very important to use the rind.

The other great combination is mozzarella. You can’t beat fresh buffalo mozzarella on pizza. Put a round of pepper on that as well. It’s got to be wood-fired, though.

The trick with cheese in a sandwich is to work with a soft cheese and not use too much of it. If you’re using bread, as opposed to a baguette, I would probably say Cheddar is one of the good ones, or Gruyère. You can’t beat the Croque Monsieur, which is the old toasted sandwich with Gruyère and bacon — a fantastic combination. But you can’t also beat grated Cheddar in a sandwich. If you’re talking about a baguette, you can get away with Brie.

There’s only one thing for me in a soufflé, and that’s fresh goat’s cheese. It’s fantastic. Goat’s cheese is very easily digestible. It’s got very tiny fat globules, which break easily and hold the soufflé together beautifully. Something like Cheddar is too fatty.

What makes cheese a) hole-ey and b) blue?

For a cheese to be hole-ey, there’s propionic bacteria in the milk when the cow hasn’t been fed fresh grass. If you feed a cow not particularly good feed, you often get this bacteria. It’s considered a fault unless you control it. Emmental was discovered by mistake. It’s made just the same as Gruyère; then they push it into a warm maturing room, where it blows up and the bacteria go off, and you get this Gruyère that suddenly turns into this blown-up flying saucer cheese.

The reason Roquefort is the granddaddy of all blue cheeses is that, traditionally, rye bread was put into the damp caves. When the bread would go mouldy it would be dried and crumbled into the curd as the cheese was being made. Two months later, they would take the cheese and “spike" it (with long needles to let air in). That would activate the mould that was already in the cheese, and plus, there was mould in the cave; they would merge and have a party. Today, blue Roquefort-ey mould is still grown on bread, but it’s done in a laboratory. And they’re very selective; there are hundreds of moulds, and cheese?makers just choose the one they want. And everyone has their own combinations.

I like to share cheese. If I’m serving cheese to guests at home, I like to concentrate on a few cheeses. Not try and impress with loads but impress with one or two, and I like to serve a big lump and let everyone share. One of the great things about a cheese board is the ability to share. There’s an ambience to it.

Again, I’m a bit simplistic when it comes to the board. I scorn fruit. I’m not saying pear and Parmesan don’t go very well. Maybe, if anything, I might do that. Normally, I just do bread and cheese. Biscuits I also sort of frown on, because they have a texture which alters the natural flavour of the cheese. Bread goes best.

What is the craziest cheese you’ve eaten?

The most confronting cheese I’ve eaten was in Sardinia, Italy. They fill a goat’s stomach with milk and hang it from the rafters for three months. The stomach contains rennet, so the cheese dries as it hangs. In Corsica, they take a washed rind cheese and deliberately add maggots. I grow my own organic vegetables and it kind of tastes like that — you occasionally get caterpillars.

Can we kill ourselves by eating too much cheese?

I’ll be evasive about the answer. It’s harmful if you have too much of anything. The trick is to have just enough. And, the secret of eating good cheese is to recognize that really good-tasting cheese goes a long way. You only need about 50g a portion. Even with cheese which is $100 (around Rs4,200) a kg, 50g is $5. A lot of people think these wonderful cheeses are rich man’s cheese; well, they’re certainly not poor man’s cheese, but they cost less than a glass of wine. But I’m sure natural cheese is better for you than processed.

Do you check your cholesterol often?

I do regular checks. It’s normal. I’m not on any pills or anything. The day may come, though. People often ask me why I’m not shaped like a cheese. But I exercise quite a lot, too.

How can we store cheese in the Indian climate?

Buy little and not so much that you can’t look after it. But if you are going to store it, the best place is in the vegetable compartment of your fridge, where it’s a bit damper and cooler. If you really want to get clever, you can get a Tupperware box, put a little hole in the top, make sure the cheese is wrapped in wax paper (you can use plastic cling film, but don’t leave it in that too long because plastic is suffocating). You can also put a little damp cloth in the box.

Which other spirits besides wine go well with cheese?

Wine is the ultimate combination. Beer and cider will go with cheese. I think people often miss cider. Cider is fantastic with Brie, Camembert and 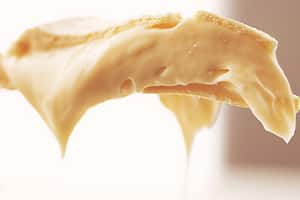 Make mine melty: Reblochon, a raw cow’s milk cheese, was sold in secret until after the French Revolution. Photograph: Adrian Lander for Cheese Slices/Hardie Grant Books

At which stage of your meal is it correct to eat cheese?

It’s dangerous to say what’s correct, but the French way of eating cheese between the main course and dessert makes sense because one, that’s when you move on to another wine, and secondly, the sweetness of the dessert will help you digest the cheese. So, it’s quite clever for digestion, too. In Italy, it’s eaten as an aperitif, and in Switzerland too; a glass of wine with cubes of Gruyère are very common. So, there’s no right and wrong.

In this traditional way of maturing Cheddar, the cloth allows the cheese to breathe. And because it’s raw milk, it reflects the original taste.

It’s England’s king of blue cheeses with a penicillin-ey, Roquefort-ey mould and a natural crusty rind. There is now a great new raw milk Stilton, which cannot use the Stilton name; it’s called Stichelton. English cheese has had a revival due to raw milk in the last 25 years.

Made outside Paris, it goes back to the days of King Charlemagne, and has been closely related to the royal court. It’s said Louis XVI was caught on the run because he was trying to finish some Brie de Meaux. Brie de Meaux is the genuine Brie from Brie. Industrial Brie is produced outside the region and is mostly innocuous, predictable, creamy nothing. Brie de Meaux has a funky forest-floor flavour and it’s oozy and stretchy.

This one is certainly one of the greats. As it ripens, it has an aroma akin to cooked cauliflower.

It represents what great cheese is about, with almost 2,000 years of history. Blue cheeses fit between soft and hard cheeses and are eaten at the end of the cheese course as they are so strong.

This great French cheese is the most popular raw milk cheese in France. My favourite Comté is matured by Marcel Petite in Fort St Antoine, a mountain fort on the French-Swiss border.

The Alpage cheeses are made for a limited period at the top of the mountains where the snow has melted. The pastures have weeds as well as grass, which produces interesting milk and cheese. Chasing the cows up and down the mountain to milk them for this cheese is hard work.

This king of cheese (in my book) is made from quality milk from a small area. Balls of hot curd dripping with whey and wafting steam are pulled out of copper vats—watching it being born is magical. It’s sweet, with crystalline pieces of calcium phosphate; it’s even strong enough to work with red wine, partly because of its low fat content (Studd says red wines don’t usually go well with cheese as the tannins fight with the fat in the cheese; he recommends white, sticky wines).

Gorgonzola originated in caves in the north of Italy. It’s a creamy blue cheese, and one of the oldest named Italian cheeses.

I love this log-shaped charcoal- covered cheese. It’s seasonal, and best in autumn.

Some of these cheeses are available at Indigo Deli, Colaba; HyperCity, Malad, select Nature’s Basket outlets and Sante, Bandra, Mumbai. Prices range from Rs1,095 to Rs3,000.