A surreal drive along the topmost stretch of IndiaLeh to Drass

Don’t be Gama in the Land of Lama. The highway sign that marries India’s best-known wrestler to spirituality is funnier than most. We’re headed out from Leh to Kargil (and then Drass) on the NH1D which continues on to Srinagar. Out past the ornate city gate, past the Ladakh Scouts Regimental Centre and their battle cry “Ki Ki So So Lhargyalo (victory to the gods)", and with the Indus river for company. In the distance beyond the surreal high-altitude desert landscape of Ladakh is the Stok Kangri peak. Wow, this really is the top of India.

At the Gurudwara Pathar Sahib, everything from the benches to the shoe counter is taken over by the name of a regiment. Army units that complete a stint in the area—it’s military central since Pakistan surprise-attacked India from Drass and Batalik in 1999—install a plaque before they leave so there’s One Double Sikh’s “Har Maidan Fateh" and the 72 Field Regiment’s “Sabse Behtar Mera Bahattar" and many more, all saying a big thank you to Waheguru (the creator) for keeping them safe. When they were building the highway, they wanted to blast a large rock that was in the way. Locals protested because they believed it had the hand imprint of Guru Nanak or Nanak Lama, as he was known here. So the army built the shrine instead and maintains it too.

Ahead, Magnetic Hill is the site of an optical illusion that makes a downhill slope look like an uphill slope, allowing our driver Tsering Angchuk to spin the story about the hill that draws your vehicle to it. Angchuk adds that the marker indicating the point where you can experience this “magic" was wrongly moved when they redid the road.

Before you know it, you’re at Nimmu, the setting of the striking confluence of the Indus and Zanskar. A few days later in Leh, my host David tells me how BJP politician L.K. Advani came here in 1996 and was shocked to discover that the Indus flows through India. Wikipedia is more polite. It says Advani “re-discovered" the river. He started the annual Sindhu Darshan Festival on its banks. 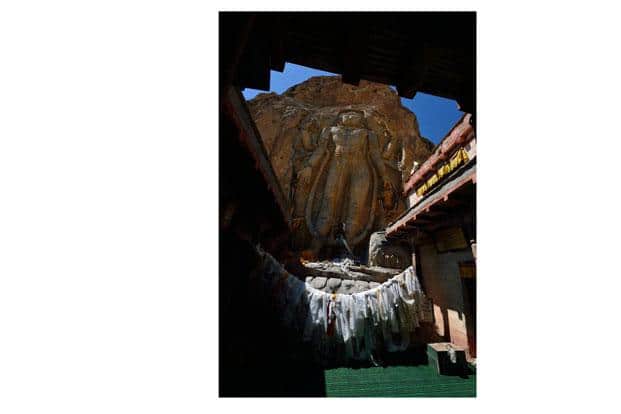 The Chamba statue of a standing Maitreya Buddha is carved in the limestone rock. 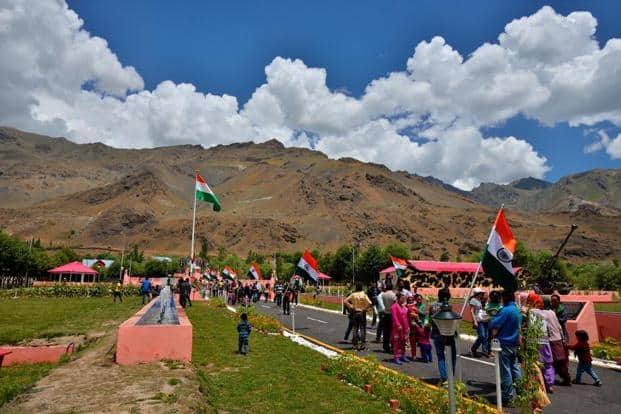 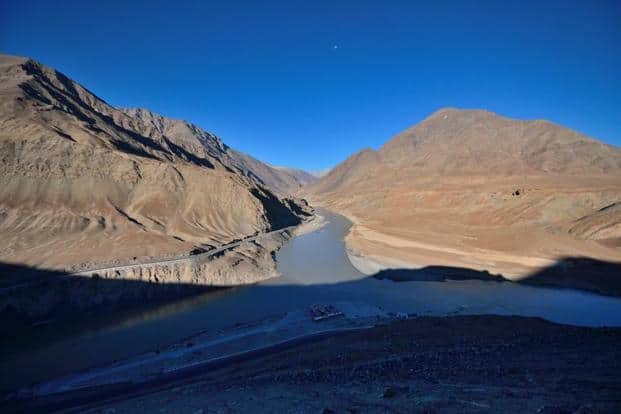 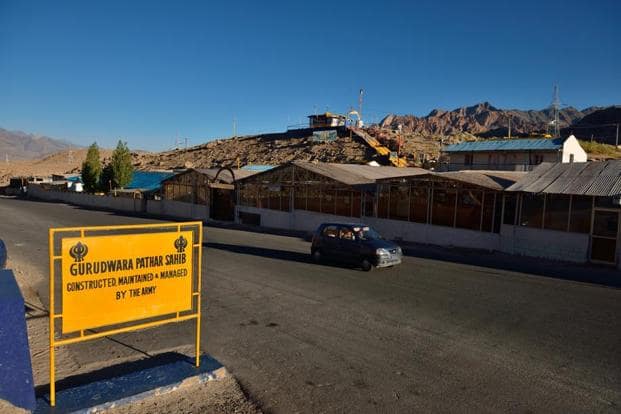 This is Royal Enfield country, or wear-black-leather-and-look-cool-on-your-Bullet territory, though the bike-crazy colonel I meet later dreams of buying a Scout, not a Bullet. There’s an Enfield Riders Ladakh Motorcycle Expedition listed on Bookmyshow.com at present. You’ll see the occasional solitary cyclist too. High altitude brings out the crazy adventurer, I guess.

The villages and hillsides are dotted with colourful prayer wheels and stupas. Stare hard enough at the bare hills and you can see faces everywhere, mothers hugging their babies, a line of Mother Marys, severed heads that could come rolling down if they decided they didn’t like the look of you. Occasionally you’ll spot a memorial to a fallen soldier. I can’t help but wonder about the story of Ashok Chakra Kishan Lal, who died on 15 October 1964.

In the battered Basgo Palace and Monastery there are 16th century murals but we don’t have the time to pause. Around 190km before Drass, the road splits—the right goes to Batalik, where a large chunk of the 1999 war was fought. By now we are in Bofors Gun territory. Here’s also where you say bye to the Indus as it heads towards Batalik and then onward to Pakistan.

And then you’re in Moonland, that surreal landscape that looks like the surface of the moon, better known to Mumbaikars as the place Bunty and Babli were transported to when they kissed. Why doesn’t that happen to lesser mortals? Bollywood loves Ladakh. In the midst of Moonland is the Lamayuru Monastery, one of the oldest in Ladakh.

We make two more stops before we reach Kargil. At 13,479ft, the Fotu La Pass is the highest point on the Leh-Srinagar highway. There’s even a Doordarshan relay station here. The Mulbekh Monastery has a 9m statue of the Maitreya Buddha.

And then the brown suddenly recedes and you’re flanked by tall poplars and squat apricot trees. As you enter the town of Kargil, Buddhism makes way for Islam. In his book Kargil—From Surprise To Victory, General V.P. Malik writes about Ladakhi Scouts marrying Shia women. You don’t see that happening now.

High up on the mountains around Kargil, the white dots are the Indian Army at their posts, Angchuk says. If you have a father who fought in the 1965 war, this is the time to look out for Point 13620, which went back and forth between India and Pakistan a few times until the former recaptured it in 1971. The Kargil War Memorial on this highway is our last stop. It’s located in the heart of where the 1999 war was fought. It’s a different India from the one we battle every day.