The catholicity of Sonia

The catholicity of Sonia

Sonia Gandhi has won a fourth term as Congress president. She is now its longest serving head. Let us try to understand her. She isn’t particularly educated, and never attended college. Her certificate in English, perhaps in a 10-week course, is from an institute that no longer exists. 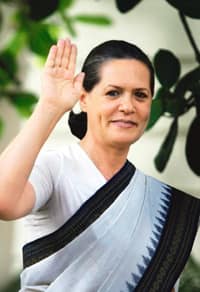 Born in December 1946, Sonia got her certificate at 18. She’s had no education since. Her important qualification is for English, but those who watch her on television are struck by how poor her English is. She cannot express complex ideas in it.

The Nehru-Gandhis were all dull students. Rajiv failed in Cambridge, Indira failed in Oxford, Sanjay failed in high school and Nehru didn’t shine at Trinity.

It’s unlikely Sonia knows much about world history. If she has read Seneca and Cicero she doesn’t show it. Those unburdened by education, like Sanjay Gandhi, find it easier to view things as either good or bad. How has this affected Sonia’s decisions? We shall see later.

Sonia is slim and fit. At the dining table, she is probably disciplined. She looks younger than 64. Her aesthetic sense may be seen in her understated saris. She dresses in neat perfection, like an Italian woman. Her manner isn’t brusque. With the press she’s polite, and listens before responding. Her tone rarely changes. When attacking BJP leaders, she uses the oblique unko or unhonein. This distances her from them, while BJP is crude and direct with her. Her Hindi is broken, but she persists with it through a sentence, unlike urban Indians who mix Hindi with English.

She retained her European passport a few years into marriage. This upsets us, but the initial reluctance to give it up actually reflects her lack of ambition. It also shows her middle-class values. How many of us cling on to our Indian passport when offered European citizenship?

She has revived Congress, and it is again the great political party of developing nations. Her husband would be proud of her, and she’s a better leader than he was.

Rajiv allowed the murder of Delhi’s Sikhs. It took Sonia to do the right thing by them. She has run Congress efficiently. Sonia is tough; we see that from the lack of dissent in what was an anarchic party 15 years ago. That she and her son reject office helps her deny it to the undeserving.

How difficult was it for her to understand our politics? Not very difficult. Understanding is easy if you can accept that Indians vote confessionally, like tribals. What’s difficult is to craft and apply policy that only a minority understands, but is good for India. Sonia declined to become prime minister in 2004, and has shown no inclination to the position since.

The best thing she has done for India is to hand Manmohan charge of policy. An austere intellectual, he has taken the fun out of Sardarji jokes. The Indian does not see the appeal of the intellectual leader. He prefers charisma whether ascetic (Gandhi), heroic (Modi), or comic (Lalu).

The thinking man, like Ambedkar, or Manmohan, must be smuggled into the cabinet. Two years after the Constitution he drafted took force, Bombay rejected Ambedkar in 1952. South Delhi rejected Manmohan, who saved our economy, in 1999. Neither man ever won a Lok Sabha seat.

We wouldn’t have Manmohan without Sonia, and here’s where her view shows. She wants to do good, and she has. Sonia is accused of undermining Manmohan. But it isn’t easy to think of something he did because it was her whim.

When they appear in public, she defers to Manmohan though the media is interested mainly in her. Her manner is correct, but she also appears to be genuinely fond of him. They seem to have a good partnership. Asked after the election if Rahul would be made minister, she said that was up to Manmohan.

She brings the European’s refinement to our otherwise crude politics. India’s middle class is jingoistic and must be overruled on Pakistan. She has shielded Manmohan from them. She is pragmatic. When Pawar, uncharacteristically, miscalculated the sentiment against her, she did not hold that against him, and Congress allied with his party.

She has brought up her children superbly. Both act correctly and modestly. Priyanka’s relationship with and defence of her father’s killer Nalini is remarkable and not easy to comprehend. His father blundered into leadership without knowing India, Rahul did the opposite. His method is slow and, though he’s quite good-looking, he doesn’t deploy his charisma. Rahul appears to be able to think independently and if this is so, will make a great prime minister, like Manmohan.

Rahul is quite educated, getting his postgraduation degree at Trinity. Amartya Sen, Master of Trinity, said of Rahul that he was “very impressed" with this “very talented" man who was “very committed to Indian development". Credit must go to his widowed mother.

When Ratan Tata’s successor is picked nobody will be surprised if he’s European. This is because we acknowledge the European’s ability. The Indian cricket team’s thinking is always outsourced to a European coach. Europe’s Protestant male built the world’s greatest nations—America, Britain and Germany. His nations are wealthy, uncorrupt, equal, secular, liberal.

We got a half-literate Catholic woman, but even she has been so good at trying to undo the damage we inflict on ourselves.

Aakar Patel’s book on the changing world of Indian servants will be published by Random House India in 2011.