Bit too much of a wannabe

Bittoo Boss begins with two disadvantages. First, the publicity design of the film is too similar to that of Band Baaja Baaraat. Second, lead actor Pulkit Samrat’s styling is reminiscent of Ranveer Singh and his acting appears to be derived from Ranbir Kapoor. But this is where the comparisons end. Though he makes a sincere and confident big-screen debut, Samrat shows neither Singh’s hunger nor Kapoor’s inherent talent. 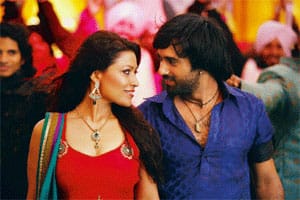 Forgettable: The lack of chemistry between the lead pair hampers the audience connection with the love story.

At one wedding, he sees Mrinalini (Amita Pathak), a headstrong girl he falls in love with and proceeds to woo. Though she likes him, she disparages his profession and lectures him on getting a real job and becoming successful. A humiliated Bittoo walks away from Mrinalini, accepting her challenge that he become rich and successful.

In order to get there, he takes a dark route, one which requires hidden cameras and a basic disregard for privacy and human relationships. The situation conflicts with Bittoo’s personality.

Till this point, writer-director Supavitra Babul maintains a tight milieu and set-up, but once Bittoo arrives in Shimla, the screenplay gets lost. Bittoo’s voyeurism-turned-do-gooder angle is overdone, culminating in yet another conflicting and contrived climax.

The Punjabi setting in Hindi movies is getting tiresome, especially with every sentence beginning or ending with “oye". While there aren’t any memorable songs as such, luckily composer Raghav Sachar’s music does not take the typical bhangra route.

Babul writes in some good moments, like when Bittoo presents Mrinalini with a gift which, to her surprise, turns out to be a cover for her scooter’s spare wheel—advertising Bittoo Boss, and the Punjabi wedding with various aunties, uncles and teenage girls.

A number of the supporting cast chip in with commendable performances, but one deserving special mention is Ashok Pathak. As Vicky, the driver who later becomes Bittoo’s assistant director, he is at once funny, sleazy and pitch-perfect.

The lack of chemistry between the lead pair hampers the audience’s connection with the love story. Amita Pathak exudes little on-screen charisma and is unable to make her character either nuanced or likeable. There is way too much emphasis given to Samrat’s floppy hair, beard (which has not maintained length continuity throughout), make-up and presenting him as a hero rather than developing the grey shades to his character. Bittoo is basically too nice a guy, which disconnects the audience from him. It will be interesting to see what Samrat can do with a meatier role.

As for Bittoo Boss, like most wedding videos that are watched once (if that), this “vdo" will also slip into a pile of rarely watched movies.

Games company Hasbro, which licensed its naval combat game Battleship to be made into a film, might just be able to hear the sound of $200 million (around Rs1,028 crore) sinking into the Pacific Ocean along with several ships and alien spacecraft.

The film directed by Peter Berg (The Kingdom, Hancock) is silly, violent, manipulative and reinforces American jingoism—that if the world is under attack (in this case by aliens), then only the US can save the world. The writers add an unsubtle and cheesy partnership between the US and Japan as two surviving commanding naval officers steer one ship to battle against an attack by an alien species.

A compendium of acting-school C-grade performances is led by Taylor Kitsch, whom Berg tries to portray as a modern-day version of Tom Cruise circa Top Gun. Kitsch plays Alex Hopper, a rebel without a cause who is compelled to grow up and take responsibility when he is the last remaining officer in a fleet under attack by large spaceships with unimaginable firepower. This is the same man who could not muster up the courage to ask his girlfriend Sam’s (Brooklyn Decker) father, Admiral Shane (Liam Neeson), if he could marry her.

In the battle with the aliens, Hopper is helped by his crew, including Petty Officer Raikes, played by pop singer Rihanna (passable), Nagata (Asano Tadanobu), the captain of a sunken Japanese vessel, and a bunch of war veterans. One cannot ignore the contribution of the aliens, who are depicted as not the brightest extraterrestrials around. Unimaginatively, they are modelled as lizards in human form and gait.

Overall, the visual effects are below par, though there are a few well-executed scenes.

Even though the entire mounting does not transcend B-grade film-making, there is something enjoyable about it, in that mindless, sci-fi adventure thriller genre where logic must be set aside, just as the logic behind a potential sequel defies reason.

When the battle is won, which like all American disaster movies—with an American at the helm—must be, a braver Alex does ask Shane for Sam’s hand. And when Shane refuses, Alex remarks, “But I saved the world."

Clearly, that’s what it takes to impress the in-laws these days.

Bittoo Boss and Battleship released in theatres on Friday.