The casualties of the Mahabharat

Poet Karthika Nar's new work, 'Until The Lions: Echoes From The Mahabharata,' channels the voices of the epic's marginal characters

A Hindu superstition about the Mahabharat inadvertently reveals its power: The belief that even as the text of the Ramayan sanctifies a home, bringing a copy of the Mahabharat into the house will create discord. Poet and dance producer Karthika Naïr’s new work, Until The Lions: Echoes From The Mahabharata, is revealing in this respect. Composed in a multitude of voices and a number of distinct and exacting poetic forms, it retells the main story of the epic—the internecine conflicts of the Kuru clan—as a history of intimate violence, inflicted by men on women, masters on slaves, and a kingdom on its subjects.

The epigraph of Until The Lions is its foundational proverb, “Until the lions have their own historians, the history of the hunt will always glorify the hunter." Naïr takes us into the dungeons under the colosseum of the Mahabharat, from which some of its bloodiest and most unbowed fighters emerge. The spine of the book is the voice of Satyavati, the “fisher-queen" progenitor of the Pandavas and Kauravas. In prose-poems whose columns rise like pillars of fire up the page, the voice of Satyavati holds together a very matrilineal version of the epic.

With the reorientation of its genealogy comes a change in the interpretation of its action. Until The Lions eschews the better-known political and feminist strategies of examining the Mahabharat through the stories of Eklavya, Karna, Draupadi or Brihannala. It gives us characters such as Poorna, the mother of Vidura; Sauvali, the mother of Yuyutsu; and Dusshala, sister of the Kauravas—through them, Naïr mounts a hugely ambitious and successful recounting of the names and characters of every one of those hundred infamous brothers.

Naïr’s grounding in the performing arts lends itself to the poems in two ways: First, its voices are rich and resonant, begging for performance. Second, the poetry performs itself on the page, in visually arresting design. To look at the book’s pages is to experience the pleasure of a thoughtful and exacting harmony. To read it, however, is to feel, often viscerally, the force of the home truth that Vyasa’s epic reaches into the heart of the darkness that drives families and nations apart.

Edited excerpts from an email interview with Naïr:

‘Until The Lions’ takes full advantage of something our parents often say about the Mahabharat: that it is an epic of moral ambiguity.

I think the Mahabharat, for me, has always been more of a manual of power, a minute and rather dispassionate account of the mechanisms used to acquire and maintain power and establish a certain expedient social order—it was never a Manichaean saga of good triumphing over evil. That, at least in my eyes, is also why it remains so timelessly relevant.

And part of my attempt—by channelling the voices of several characters, most on the outer periphery of the arena where the power games unfold—was first to magnify these moral fissures, then to dissect the human cost of nation and empire, to probe whether morality and justice are not the first casualties in a heroic or godly narrative.

The voices you’ve chosen to narrate the stories in are almost all of women, or of extremely marginal characters. There is a foot soldier and a dog, among others. I’m reminded of Alice Oswald, who called her ‘Memorial’ an “Excavation Of The Iliad". Did you also think of what you were doing as a kind of poetic archaeology?

Memorial is such a striking, luminous work. Alice Oswald is a great classicist—so it’s a very flattering analogy! What Oswald accomplished was an amazing feat of poetic archaeology, as you call it: She brought to the fore the chorus, the names and epitaphs of the vast hordes of soldiers that most writers and readers tend to dismiss (though Homer himself had recorded them), and she eliminated most of the “plot" and the recognized heroes.

But I don’t have that scholarly wealth; mine is much less an act of archaeology than one of (perhaps forensic) reconstruction! Actually, moving to another field, I see it as an act of refraction: The characters and events are all from various versions of the Mahabharat, regional traditions and ancient retellings, but the voices themselves are projections. This is how I imagined their inner lives, based on a throwaway phrase by Vyasa or a hint we get from a later narrative, or from a belief system in one part of South Asia. 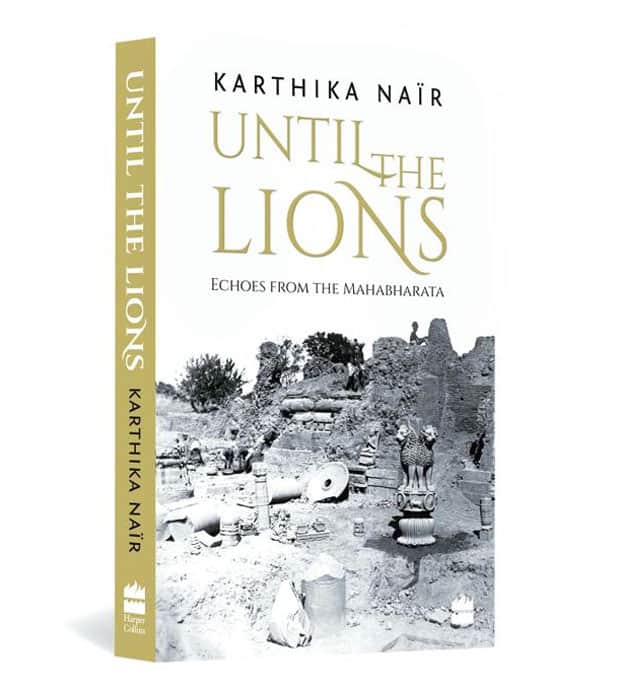 ‘Until The Lions’ is, of course, a political book. How did you think about that? Was politics inevitable with poetry, or was there a struggle between poetic form and political function?

Maybe my approach is simplistic, but I see all art-making (if not art itself)—not just poetry—as a political act. Not always overtly, not even consciously often, but I think art reflects, highlights one’s political questions, stances, biases—and privilege, or lack of it. Even explicit declarations by artists that there is nothing political in their work, that they are not political beings. To eschew politics is also political; a valid choice, perhaps, but definitely a political act. Again, maybe this is simplistic, and maybe it stems from my professional trajectory—I work in contemporary dance—where most of our choices on art programming, for instance, have had significant political underpinnings and consequences.

There was no struggle or compromise between poetic form and political function in this book. It was an expanse of freedom, thanks to hugely supportive publishers. That may not always be true for the future adaptations of Until The Lions, or other dance projects I will be involved in.

I saw you read an excerpt from the work last year, and it was extraordinary. Do you consider yourself as the poems’ performer—or their bard, I suppose—as much as their writer?

Less as a performer and more a conduit, or a specular surface for those voices—because I see the poems as representing each of the voices. Also, some of the poems reference—in compositional, structural terms—performance, dance in particular. Others are concrete poems. So the performative aspect, whether visually (on paper) or orally, was almost inevitable. It was also important that each voice be distinct; that was something I fretted about. At the end of the day, I am just one person, and the same writer and I needed to be faithful to 19 very different voices, and in rapid succession. I am sure prose—fiction—writers are used to these challenges (Orhan Pamuk does it magnificently in My Name Is Red, for instance) but I wasn’t, especially not when I started.

You’ve worked with different forms, sculpting them geometrically on to the page. Could you tell us about bringing these very modern poetic forms and shapes to the Mahabharat?

It was vital that the 19 voices reflect 19 or more characters, and very different personalities. Form, for me, was integral to developing individuality. But apart from the concrete poems (and some like Constancy IV, which I built, referencing the structure of Anne Teresa De Keersmaeker’s Violin Fase), they are not modern. Most of these forms belong to poetic traditions from around the world, are used in many languages; they are also quite old, whether the padam (Krishna) and pankti (Dhrupada’s wife), the Malay pantoum (Gandhari) and the Persian rub’ai (Ulupi), or more European ones like the glosa (Poorna), rondeau (Uttaraa 2nd part) or triolet (Hidimbi 2nd part).

My reasons for using them were always functional: Each time I chose the form that seemed most reflective of a certain personality, most appropriate for the mood I needed to convey. Kunti’s relentlessness, her single-mindedness, I felt, could be well conveyed through the canzone and the five end-words that its 65 lines hinge on. For Mohini—one of the most performative of poems—I worked with the ebb and flood of the voice, quite literally, and I tried to graph it on the page, like an electrocardiogram (the poem is similar to an ostinato, but what interested me there most was the visual shape her rage and grief took, how it reflected the cadence of her heart).

Most people reading this will never have seen, for example, a poem that not only names all the 100 sons of Gandhari, but also draws each by character and personality.

Landay For Doomed Siblings in Dusshala’s voice was something I wanted to attempt from the beginning. To name, then to remember the dead as more than just names and numbers, more than a collective noun for evil. Even though the epic itself just lumps them as a number and, sadly, indicates very little about the 100 Kaurava brothers (we get merely the rare hint of personality, such as with Vikarna, when he opposes the disrobing of Draupadi). So—more than any other poem—this one is an act of invention, because there was so little to go by. But doing it from the sister’s perspective gave me a certain leeway: There was room for fond remembrance, for regret, but also for wry observation; and the landay—rhyming couplets of 9/13 syllables—was a wonderful tool to express grief, one that also could contain a thumbnail sketch approach.

Could you say a little about the adaptation of ‘Until The Lions’ to dance? British-Asian choreographer Akram Khan is bringing out a production based on (a poem in the voice of) Amba next year.

I had shared some of the early poems with Farooq Chaudhry, Akram’s producer, who urged me to show them to Akram—he felt that they might be prime material for an adaptation. Akram was really drawn to Amba’s voice for the story and the resistance she embodies, also because the actress who had played Amba in Peter Brook’s Mahabharata had been quite an inspirational figure during Akram’s own stint in the production (he had performed in the touring version as a teenager).

So, yes, he asked if he could borrow the title of my book, and adapt that one chapter. It will probably be an abstract, highly kinetic rendition of that story, where the themes are condensed or highlighted or elided depending on the choreographer’s convictions. Knowing Akram, the movement will be stunning, and the visual world equally so (set design by Tim Yip; lighting by Michael Hulls, both past collaborators: geniuses, really). I provided the poem, of course, the narrative concept, and reworked a modular scenario of five chapters to provide a chassis, as it were, for the composition. The rest is in Akram’s hands.

For an excerpt from the book, visit www.livemint.com/bookexcerpts