Living and dying in Dover Lane

On 1 July, author Amit Chaudhuri launched a signature campaign on the online campaign portal Avaaz.org, looking to save Kolkata’s distinctive architectural heritage. Refreshingly, its focus is not the grand colonial district of central Kolkata or its celebrated mansions, but “the houses in which people have lived, and still live, in various neighbourhoods in the city".

One such neighbourhood is Dover Lane in south Kolkata, an enclave of middle-class solidity between commercial Gariahat and Anglicized Ballygunge, and a repository of heritage tangible and intangible.

“That’s Bubu-Bonnie’s house, that’s Maladi’s, then there’s Bulbuli’s, next to that is Aparna-Shilpa’s and right there, that was an Indian Oil flat, and whoever lived there became my best friend."

I was introducing the still-new husband to my para, Dover Lane. He had grown up just a few streets away, but in a different world of sprawling bungalows in their own grounds. He had never experienced a para (there is no single English word that effectively conveys the matrix of neighbourhood, commonality, community); I had never known anything else.

But while introducing each house to him via my friends who lived there, time collapsed, and I was in single digits, walking back home, held firmly by the hand by an uncle while acting as guide. “That’s where Bubu-Bonnie live, and two houses up is Maladi, and on the other side is Manik jethu’s house; that is where we play every evening..." We were heartbroken on learning that the house was to make way for a “multi-storeyed". My father met Manik jethu one day while Dover Lane was still recovering from the news; his expression, as he recounted the conversation to my grandmother, was unreadable. “Manik babu said they had no idea they would be leading such long lives," he said. “This was the only way they could tie up their affairs."

For my friends and I, who had known no other life than the comfortable, unvarying middle-classness of Dover Lane, it was also the most exciting thing that had ever happened. For the longest time, rumours ran wild—at least in the sub-teen group—that the fourth-floor penthouse (we rolled the word around on our tongue with all the sophistication becoming of 11-year-olds) had been sold to Tina and Anil Ambani. The logic was simple: Only rich people lived in flats and the Ambanis were the richest people we’d ever heard of. Poring over images of oxbow lakes in school geography texts, I often wondered why they seemed so, well, familiar; it was years later that I made the connection. Dover Lane was like that lake left behind by a meandering river on its way to the sea. Possibly on that same walk, I remember my uncle commenting drily, “Is Dover Lane asleep? It must be 8pm."

Many were the schoolmates who missed our birthday parties because they lost their way to Dover Lane, but that never mattered, because there were enough friends in the para, with bonds often going back three generations. It seems strange in retrospect—or maybe not—but my sister, six years my elder, had as big a gang of friends of exactly the same age as I did. Many of us attended South Point School, only because, I’m convinced, the children’s section was located close by. There were all of three cricket “pitches"—the street, actually, with traffic playing second fiddle—in the 18-plot circle, inconveniently located balconies the inevitable, if unintended, resting place for many enthusiastic shots. With a change of season, or according to the time of day, the bricks holding up the wickets would gracefully give way to badminton nets or makeshift goalposts.

North Calcutta, which was called “Black Town" by the British, was the mother lode of para life (but much more squished), with houses rising right out of the pavement, as in Dover Lane; it is a perfect instance of how architecture builds communities. The only parallel I discovered to the para was the public sector unit housing colonies in places like Ranchi and Jamshedpur, with one significant difference: In these townships, housing was strictly stratified; officers were bestowed accommodation on the basis of their ranks. Dover Lane was far more democratic. Our families had all landed up there by a twist of fate. My father, I know, moved to Dover Lane with my grandparents in the early 1950s, after our ancestral property in Uttarpara in Hooghly district was taken over by the government under land reform laws. At that time, the number of houses in the locality could be counted on the tips of one’s fingers, though at least a couple of houses dated back to the 1930s. By the time my sister and I came along, many of these houses had been split into flats, with families occupying a floor, or even half of one. Our house, tall and narrow, continued to be an aberration; I took to telling my friends that we weren’t genetically thin, but “architecturally" slim—try climbing up and down four flights of red-oxide stairs 10 times a day, plus for meals, and see what it does to your shape. While the facade of each house maintained a superficial similarity, with hanging balconies and slatted windows, the interiors were often quite different. We knew, for instance, that the two-storeyed house right across from ours had only one bathroom on the ground floor and no piped water. And the houses that had been broken up into flats, of course, were the epitome of modernity in our eyes, with everything they could ever want on one floor and no tiresome climbing up and down.

Chaffing at the bit during my growing up years, I thought Dover Lane was a stagnant pool; the oxbow lake imagery had lost its romantic resonance. Transferred to Mumbai, my friend from the Indian Oil flat came back for a visit, and pronounced delightedly, “Nothing’s changed!" I took that as an indictment and yearned to leave. And I did, at the first opportunity, living in cities across the country, but always, always, coming back home. 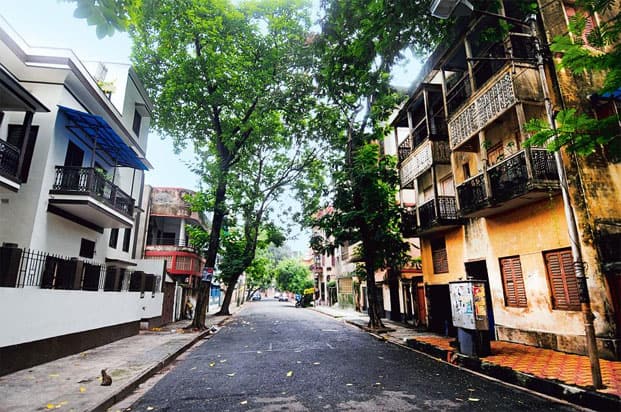 Inured to the sights, sounds, smells that comprise life, I didn’t notice that Dover Lane was ageing. It hit me one day when I noticed how many of the houses around were occupied only by my friends’ parents, that my friends themselves were only on Facebook. One gracious house came down, and then another, to be replaced by tottering, not-too-tall towers. Front steps of houses, where everyone congregated for lengthy chat sessions, were replaced by stilts holding up parking lots. Open balconies grew grills. Gradually, the lights dimmed till, one day, they did not burn at all.

Last year, our house joined them. Is a house still home when no one lives there any more? Does such a house—not clever in its architecture, not significant in design, not characterized by anything more than memories across every square inch—deserve saving? It is perhaps too big a question to answer without perspective and distance; and it was just this objectivity that Amit Chaudhuri brought to his impassioned piece for The Guardian on 2 July. We still aren’t very sure where we go from here, but, thanks to his outsider’s view, we are more convinced than ever that we have something worth fighting for.