Home / Mint-lounge / Features /  The sultans of spin
Back
Share Via

The sultans of spin

The sultans of spin

As the spark led to smoke, the film director cancelled the day’s shoot. The film publicist on the set telephoned a reporter to give the news, assuming it would be useful. The reporter called back: “My editor says we will use it only if someone died on the sets."

A reporter calls this film publicist at least four times a day, the first call at 8am, asking the same question: “Kuch hai kya (Do you have any news)?" By the end of the day, he would be willing to take any news—whether it’s a lost cat, a bad haircut or someone burping at the dinner table.

A media observer mentioned how, before the release of a particular production house’s films, there would be negative stories about the movies already running in theatres or those set to release, to discredit the competition.

None of the people mentioned above wished to be identified, in typical film industry fashion—a lot of news in this business can’t be sourced because of the repercussions it may have on careers.

Welcome to the world of film publicity, where the anxious producer sweating over huge investments is willing to bend all rules to get mileage, where large amounts of media real estate—print, television, Internet—needs to be filled and a winner or loser is decided within three days of the film’s release. “Bollywood is mainstream news now," says Prabhat Choudhary of Spice. “The consumer hungers for it."

With millions of rupees riding on a movie’s success, in a competitive space where two-three films on an average jostle weekly for attention, the stakes are significant. Promotion of non-formulaic films and unconventional actors needs more than the usual formulaic link-ups and break-ups—those work too sometimes—which is taking film publicity to new highs or, as some believe, new lows.

In the 1997 film Wag the Dog, a news channel fabricates a war to influence an election; in the 2010 Hindi film Tere Bin Laden, an impersonator on a news channel intensifies a war. Film publicists say Bollywood sees a battle every day for the best possible “scoop".

The ‘need’ of a controversy 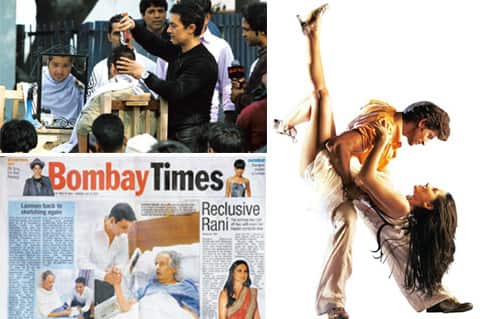 The standard PR drives have often involved relationships, or “link-ups" in Bollywood parlance—from cosy ones between the lead actors (not necessarily with their approval) to acrimonious ones between director-actor—release of box-office figures proclaiming the film is a hit and success parties. Controversies, such as lawsuits, protests by communities and political parties are known to help a film. With the stakes high, the importance of marketing and PR has blurred the lines between truth and creativity, fact and fiction. “Film PR has turned every tenet of publicity on its head," says Parull Gossain, who runs her own PR agency.

Stylist Vijayeta Kumar remembers this story about A.R. Rahman’s Oscar clothes being done by a well-known designer when actually, she was designing them.

Another insider mentions an article about Sonam Kapoor refusing a Mani Ratnam film, “to appear cool", though she had not even been approached.

The industry is “incestuous"— news comes from technicians, people who work on the sets, such as make-up artists, spotboys and assistants, through word of mouth, “because everyone knows someone". A lot of it makes it into the press without the source realizing it—insiders say a casual conversation between two people does not always remain between them.

According to film publicist Dale Bhagwagar, “A majority of the stories are planted." He mentions one last year about actor Chunky Pandey, who claimed he was offered money to attend a funeral. Ten days after the story appeared, Pandey’s film Daddy Cool released, which is about incidents surrounding a funeral. “You can put a spin to anything," says Atul Kasbekar, chairman and managing director of Bling Entertainment, a celebrity management company. “It’s gone through the stratosphere abroad; they give a spin to even sex tapes. Ten years ago, a person’s career could have ended with that."

Recently, actor Akshay Kumar was on the cover of Bombay Times, grinning into cameras next to R.K. Laxman in hospital. Kumar’s film Khatta Meetha released a few days later on 23 July. His character in the film is “the common man", inspired by Laxman’s iconic caricature. The photograph set off an avalanche of disgusted retorts on social networking sites. Bombay Times said the next day that the rendezvous was its idea and Laxman was pleased with the meeting, but by then the damage was done.

“All publicity is good," disagrees Afsar Zaidi, chief executive officer, Carving Dreams, a talent agency and entertainment company. “If people are contributing expensive ink on you, any person should be grateful."

Is all publicity good?

Several publicists, image consultants and brand managers say Kumar’s picture was poor publicity, but this brings up the old adage—is there any such thing as bad publicity? The need to grab the attention of an impatient consumer who is already being bombarded with images of a shine-inducing shampoo or a woman getting married on live television is bending rules to the point of desperation. “We are in an aggressive market that cannot afford to be lethargic. You need an edge in communication," says Shailendra Singh, joint managing director, Percept Ltd, whose businesses include PR and film production.

“Since the last two years, stars are available on social networking sites," says a film publicist who did not wish to be identified. “Now, there is no excitement; we know when Shah Rukh Khan is dropping his children to school. So excitement has to be created."

The onus often rests on reporters to get something different. One publicist says she keeps track of how some reporters are doing. “If someone is going through a bad phase, I try to give them a story," she says.

Unlike reporters, film publicists have greater access to movie sets and frequent visits put them on friendly terms with studio workers—giving them a hold on what happens at these places. Much of the information is not crosschecked before it goes to press.

“There is no way of knowing (what’s fact) because there is no accountability. Almost everywhere, gossip is printed as fact because you cannot sue people with these libel laws," says Anirban Das Blah, managing director, Kwan Entertainment and Marketing Solutions. “The glamour business runs on instinct, not always on logic," adds Choudhary. “Every Friday, the rules change."

Six-packs, link-ups, scandals—for a movie’s publicity, nothing is taboo

Sometime last year, the country’s biggest film star called a highly placed politician in India because American immigration officials wanted to check his pockets. Most people who have travelled to the US would have taken it in their stride but the man whose last name is Khan, and who was not a terrorist, stopped press in India. Shah Rukh Khan’s detention at New York airport came when he was finishing shooting for his film ‘My Name is Khan’, coincidentally based on racial profiling in the US. The question inevitably cropped up—was this really an unintended stroke of chance?—even as Khan vented that whoever thought it was a publicity stunt should “shut up". Here are some standard PR formulae:

Before this year’s ‘I Hate Luv Storys’, lead actor Sonam Kapoor was linked with director Punit Malhotra. Coincidentally, the “affair ended" recently. Last year, tabloids plastered the news of Hrithik Roshan getting too close to co-star Barbara Mori even as his wife stormed out of their home. Later, it appeared the couple were merely troubled by white ants in their plush Juhu flat. Roshan’s film‘Kites’ bombed at the box office this year, though the trio have been photographed often together since then.

The same with actors Malaika and Arbaaz Khan, who were said to be on the verge of a break-up. This was later denied. It was merely a publicity gimmick to promote a haircare brand they were endorsing.

Shah Rukh Khan needs to take blame for the feverishly abused term “six-pack", which started with his film ‘Om Shanti Om’. The PR pack grabbed the pack, and how. Soon Aamir Khan had the eight-pack, which is anatomically not possible, for ‘Ghajini’, which was publicized with videos of him working out. Now, every actor worth his gym membership poses with his packs, which could very well be smart work on Photoshop. Imran Khan was the latest with ‘I Hate Luv Storys’. Not to be left behind, Rekha got on the cover of a magazine showing off the body of a 20-year-old on a diet of breadsticks.

What breathes life into a slow starter is a controversy. Whether it’s Mallika Sherawat’s 17 kisses in her debut film ‘Khwahish’—it was a dud but she benefited thanks to the few who watched to count. This year’s ‘Na Jaane Kyon’ will have two men kissing but the the film-makers insist it’s not a gimmick. The poster of ‘Kurbaan’ had Kareena Kapoor’s bare back, which created suitable excitement, more so after she allegedly wanted the scene removed. Saif Ali Khan apologized to some sections of the Sikh community before last year’s ‘Love Aaj Kal’, as did Karan Johar for using the word Bombay in ‘Wake Up Sid’. Shah Rukh Khan dropped “barber" from his movie title ‘Billu’ after facing protests from, well, barbers. Gangster Maya Dolas’ mother protested against the depiction of her son in ‘Shootout at Lokhandwala’ while Haji Mastan’s kin went to court against last week’s release ‘Once Upon a Time in Mumbaai’.