Home / Mint-lounge / Features /  Field of dreams
Back
Share Via

The slums and informal settlements of India’s cities are often hubs of economic activity. In these high-risk, stressful environments, the idea of sports and recreation for a vulnerable population of children from marginalized areas can seem a little whimsical. Why would anyone get them to play in the time they could be taking more classes or getting vocational training? The most direct answer is: Children have the right to play. 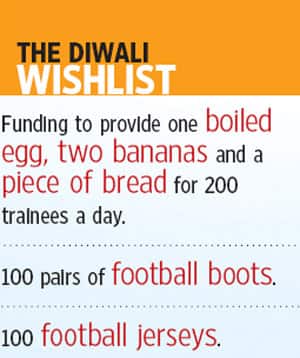 Perhaps no other structured sport admits how elemental this idea is than football. Unlike many racket sports and cricket, it does not require a plethora of equipment. It is a simple game: a ball, a bit of open space and a general consensus on where the goal should be.

Sure, football is no substitute for formal education, as all sports-for-development organizations emphasize, but it can be a chance to experience a level playing field and learn crucial values: teamwork, foresight, tactical thinking, respect and fair play.

On the last day of practice before the Puja break, there is an element of revelry in the air. The football action, nevertheless, continues to be intense. Shanti Mullick, an Arjuna-awardee footballer, keenly follows the ball. She eventually picks out a burly footballer and calls him over to her position. “How old are you?" she asks. “Seventeen," the player replies. “Take care with your tackles. These kids might get hurt."

Mullick is among the 14-odd football coaches at the Avenue Sammilani Club at Kolkata’s Rabindra Sarovar who offers her services as a trainer without charging a fee. Benefiting from the voluntary work of coaches is a spirited gang of almost 700 children and young adults. A majority of them come from hard-up economic backgrounds from the neighbouring slums in Lake Gardens or Tollygunge as well as distant suburban centres such as Baruipur, Serampore, even Bardhaman. “I would say a little more than 80% of the kids come from poor families," says Mullick. These youngsters are taught football skills three days a week throughout the year for free. It is a tradition that the club has maintained from 1942; and it has accounted for countless players, such as Subhas Bhowmick, Sukalyan Ghosh Dastidar, Pintu Sur, Prasanta Banerjee and Tushar Rakshit, who have honed their talent at the club and gone on to become star footballers at the Kolkata Maidan. Some have even represented India.

“It is true that we have not been able to provide a nutritious diet to the children, but after every practice session we ensure that these players have something to eat," says the club’s secretary and coach, Tapan Ray.

Existing funds rarely allow the club to add to the tiffin of flattened rice and sugar that is provided compulsorily to the players. A player such as 12-year-old Sudipto Ghosh can do with a more nutritious diet, admits Ray. Ghosh is among the many trainee footballers at the club whose parents are involved in low-earning professions such as those of domestic helps, rickshaw pullers and daily labourers. “Even if we want to add a banana to Sudipto’s diet, we can’t because of fund constraints," Ray says.

While the club generates finances from donations by members and non-members, and through the advertisements it picks up for an annual brochure, most of it is utilized towards keeping the game going and providing jerseys and boots to players. “When children from well-off families come for training, we don’t charge any fee from them either but request their parents to contribute in some way," says Ray. This is a scoring game, look at the way the kids are boxed into a small space, with the goalposts really close to each other," says the diminutive Arup Das, pointing to the field. Young boys between the ages of 10 and 12 are playing out an intense match in a small part of the field, marked by red cones and two mobile goalposts. “It’s to encourage them to shoot at goal—they get a shot at it every 20 seconds or so."

Das is the founder of India Youth Soccer Association (IYSA), a Delhi-based organization that provides football coaching to underprivileged children from areas such as Vasant Vihar, Vasant Kunj, Basant Gaon and Sarojini Nagar for free and organizes leagues and tournaments for them as well. The children are from the government schools in these areas; it’s a mix of children who live in slums, slum clusters, government housing, servant quarters in apartments and houses, among others. “Every child here gets a ball for himself during training," says Das. “When a person has a ball with him, it’s called ‘on-time’. And the more ‘on-time’ you have, the better you will get at the game."

From Monday to Friday every week, almost 200 underprivileged children in Delhi put on their football boots for training at IYSA. The organization provides excellent infrastructure—hundreds of footballs and brightly coloured training cones, mobile goalposts, first-aid kits, a well-maintained football field and six coaches, all of whom are former state-level footballers.

“Right now, it’s not about producing professional players," says Das. “Our objective is to get more and more of these children to come and play the game, and to give them a good grasp of the basics."

Nine-year-old Prakash Arya, whose father is a domestic cook, joined IYSA a month ago, and was immediately spotted by the coaching staff as a special talent. “I love playing," Arya says, “and getting all this training is the best thing that has happened to me."

“The children here, their main problem is the lack of good nutrition," says Das. “But they are also hardier than kids from more privileged backgrounds. They want to work harder, they are mentally tougher, and they are far more likely to be sportsmen." 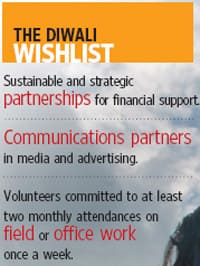 “At first, I didn’t think much about what I was doing," she says. “What I know now—to strike the ball with the inside of the foot, to dribble, the skills, the laws—came later." She loved the game, and learnt well. Now a 19-year-old commerce student at Siddhartha College of Commerce and Economics, with a diploma in physical education, Pujari is still with Magic Bus. She is a mentor and trainer, in what is among the city’s oldest and most famous sports-for-development programmes.

Several of her fellow trainers at Magic Bus are young men and women like her, giving children from Mumbai’s most disadvantaged areas, including Budhwar Park (Colaba), Bhagat Singh Nagar (Jogeshwari) and Dharavi, the chance to learn crucial lessons about their lives and abilities—but most of all, just a chance to play. “There are a lot of NGOs addressing health, education, nutrition for children from marginalized areas," says Sohan Shah, head of sustainability at Magic Bus. “That kind of symptomatic work is necessary. But we do something lateral."

Sustainability is important to Magic Bus. Their programme touches 3,000 children a year in Mumbai, at over 50 locations across the city, but “we aim to reach a million children within the next three years through a nationwide expansion of the Magic Bus programme in other cities and through rural India," says Shah.

The Shining Star School is nestled inside the campus of Sneha Care Home in south-east Bangalore. The school is a residential care facility for children infected with HIV, coming mainly from poor families in and around Bangalore. 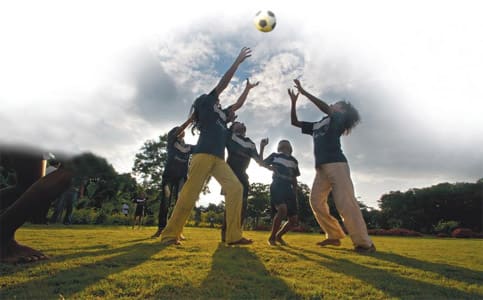 Equalizer: Sports can be one way to combat the social stigma associated with HIV. Aniruddha Chowdhury/Mint 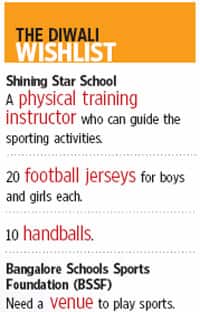 In this, he has not been alone. The Bangalore Schools Sports Foundation (BSSF)—an NGO that aims to promote sport at the grass roots—also uses sports as a means of empowerment. “These may be children who are HIV-affected, but we have no clue about the strength and the potential they have till we expose them to different things and find out what they are good at," says Elvis Joseph, the foundation’s director. The BSSF has been instrumental in developing sports modules for HIV-affected children at the Shining Star School. Along with a team of experts that included sports consultants, teachers, doctors and others, they drew up a plan to find out what impact playing sports could have on these children. This meant getting the children together to play—and importantly, “getting them uniforms".

“Sport is one of the surest ways of fighting the social stigma associated with HIV," Joseph says. “So we’re now planning an event where kids of Shining Star School will compete against other mainstream schoolchildren. We want to make sport an enabler for these kids to join mainstream society—as other responsible citizens."

* Some names in the article have been changed to protect identities.

A former international ‘kabaddi’ player who won the Arjuna award in 2001, C.H. Gowda scouts for talent across Karnataka and nurtures it at the Bangalore Maruthi Kabaddi Club Gowda, who won the Arjuna award in 2001, scouts for kabaddi talent through the city and the state. At the Bangalore Maruthi Kabaddi Club, he trains talented young boys and girls free of cost. The players come from lower middle class set-ups from areas such as Yeshwanthpur, Nelamangala, Chikkabanavara and Mathikere.

Gowda took to kabaddi early. His father, who was a trolley driver with Bharat Electronics Ltd, Bangalore, didn’t mind his son’s sporting exertions. The only thing that bothered him was the possibility of serious injury. It’s something Gowda confronts often. “Injury is one of the reasons people don’t get into the sport much," he says. “Often, I have to convince parents of talented players who want to pursue it seriously. This is the hardest part."

Another issue he highlights is the recent changes within the game. “Nowadays, kabaddi is played on a mat. India may be a strong kabaddi team even now, but the difference between mud and mat is big." He likens the change in the game to the one in hockey, when the playing surface shifted from grass to astroturf. The story of Indian hockey thereafter is well known. Gowda doesn’t want something like that to happen in his game. “I’m training my players here, but even they know that we need more modern amenities to become truly top class."