Gaurav Jani had survived the yakze.

The Chang Pas, a semi-nomadic tribe that lives in the world’s highest desert—a vast, arid plateau called Changthang that extends from Tibet to Ladakh—don’t remember an “outsider" ever being part of a yakze. It’s where villagers take turns staying with the tribe’s yaks, kept 10-15 km away from their travelling campsite. The yakze involves three nights spent in the open with no tents and no heat furnaces in temperatures that hover around -25 degrees Celsius, and windspeeds that reach up to 70 kilometres per hour (kmph). For some, this is the definition of human endurance. For the Chang Pas, it’s a picnic—a few days spent away from the rest of the village, drinking and chatting, and keeping an eye out for the wolves that threaten their yak herd.

Towards the end of December in 2010, Jani, an independent documentary film-maker based in Ahmedabad, scrambled up to the grazing grounds, at 16,300 ft, with four Chang Pas to tend to a herd of almost 700 yaks. Despite the extreme cold, as night came on, Jani and the Chang Pas settled into their sleeping bags for a night under a brilliantly starlit sky. A few hours later, Jani woke up to find himself covered in 2 inches of snow.

“I woke up because I wanted to pee, but it was so cold outside, I could not imagine getting out of the sleeping bag," Jani says. “Then, one by one, the others woke up, all wanting to pee, since we had spent the day drinking enormous quantities of tea. But no one could get out of their bags."

Jani after his bike broke down at the end of the journey. Photo courtesy: Gauran Jani

When the sun began to rise, the men watched, in awe, the magical transformation that had taken place. Everything around them was the purest shade of white.

In his new film, Motorcycle Chang Pa, Jani explores the life of the Ladakhi nomads as they migrate with the seasons, and cope with some of the harshest conditions imaginable. Shot over a full year of living with the Chang Pas, the film is currently being edited, and is due for release in March 2013.

This is not Jani’s first brush with the Chang Pas. His debut film, Riding Solo To The Top Of The World, released in 2006, was about his journey on a bike through the Changthang region of Ladakh. Jani travelled alone back then, with no support or back-up, painstakingly recording the adventure as a one-man film unit. The documentary won almost a dozen awards, including the National Award for Best Non-Feature Film. Jani repeated his solo film-making technique for the new documentary.

“In Riding Solo, I had not captured the most important and the toughest feature of Chang Pa life—the winter," Jani says. “That’s one of the reasons I went back to make this film. Also, Riding Solo was shot in 2004, and already there were few nomads. This time the numbers had gone down even more drastically. I think the nomadic life will go completely in four to five years, so I wanted to document it before that happens." 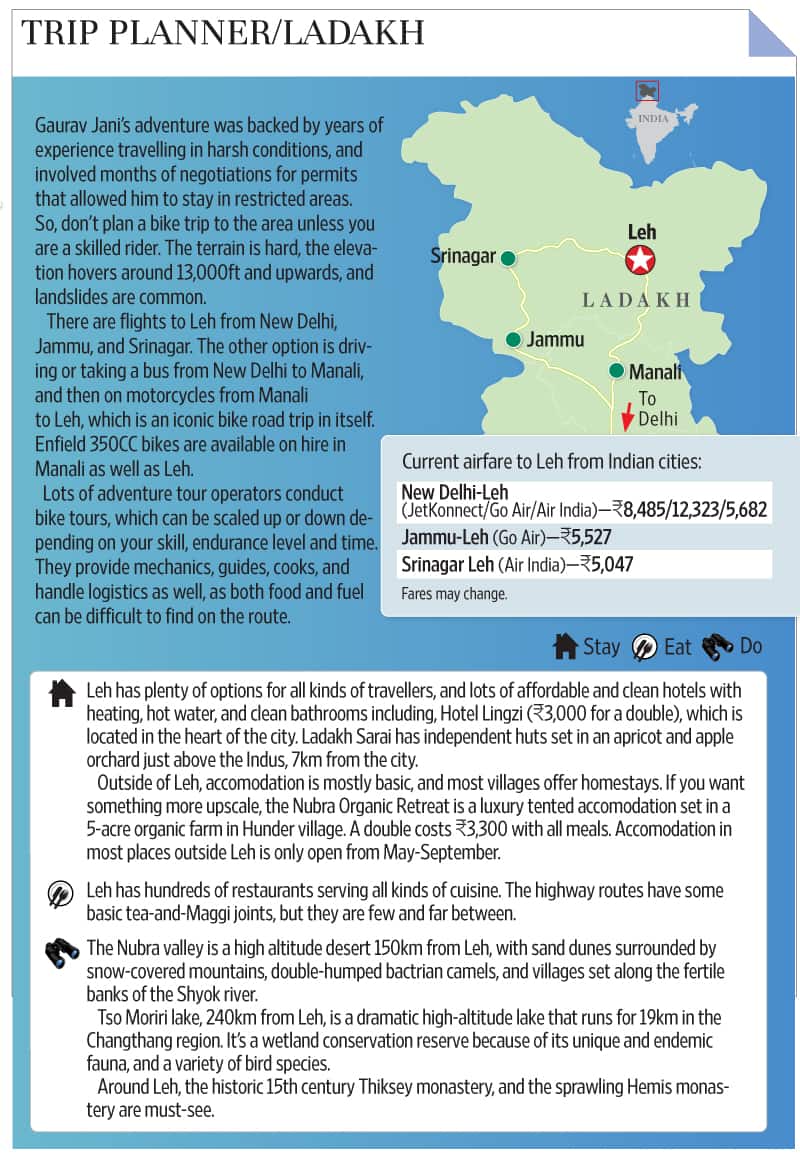 Tsewang, who calls Jani’s motorbike (a 350cc Bullet) the “red yak" and names Jani the “motorcycle Chang Pa", tells Jani in the film that he can never live below a roof because it will “stifle him" and because he’s “too used to living with sheep and yak and drinking their milk first thing in the morning". Riding Solo ends with Jani riding away from Tsewang’s tent, Motorcycle Chang Pa begins at Tsewang’s tent.

“But where there was previously just a dirt track, there are now asphalt roads," Jani says. “Because of the Chinese build-up, there are now army camps, telephone lines and bunkers. The wilderness is going."

More and more Chang Pas are moving to Leh to become drivers or trekking guides, and an ageing Tsewang himself has given up the nomadic life.

“I was upset with the changes," Jani says, “but Tsewang wasn’t. He had accepted the changes, he told me it was bound to happen, and what’s so bad about something that is inevitable?"

But for now, Jani, with his usual intimate and direct style, documents and lives with the last of the nomads, making five migrations over one year (the longest one was around 45 km, and took two days), and watching entire villages pack up all their belongings in less than two hours, and be on the march for a new grassland. Woven through it all, of course, is the breathtaking landscape of some of the remotest parts of Ladakh, in every shade of blue, white and green.