A cookbook good enough to eat

The distance between me and Indian Accent, one of my favourite restaurants in the country, is just over 2100km, according to Google; some 29 hours of driving away. The distance between me and my next meal, as I write this, is considerably less, something like a couple of hours. And there isn’t a spoonful of ghee’s hope in a hot pan that I will be able to replicate for dinner any of the recipes to resemble Rohit Chawla’s photographs in the fabulously produced Indian Accent Restaurant Cookbook (IARC), by Chef Manish Mehrotra.

If you think that’s a shortcut to misery, you couldn’t be more wrong. Because what the IARC does—beyond making you want to book the next flight to Delhi and eat a meal at the restaurant—is this: It lifts your ambitions, inspires you to look at regular ingredients differently and makes you believe, in a calm, cool manner evocative of the author’s own personality, that you can actually cook on par with Mehrotra, one of the top three chefs in the country. 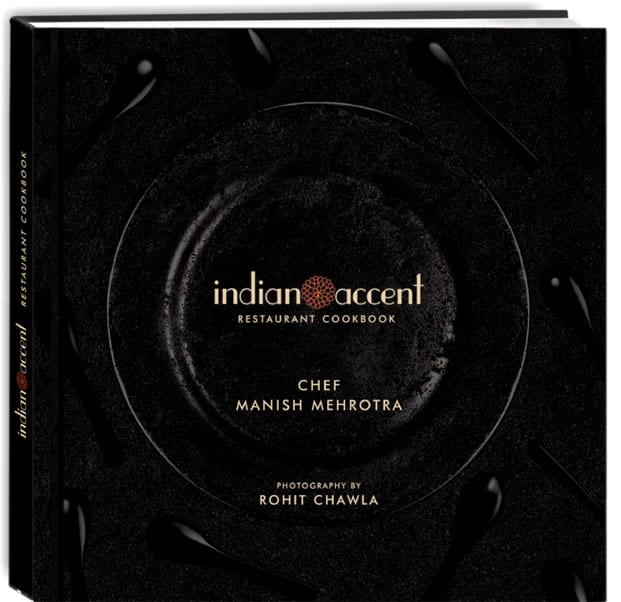 This is not as easy as it sounds. Yes, all cookbooks aspire to help you cook; some may even be inspirational. Very few, however—and this is especially true of those by celebrated chefs and those that are mounted like art books—manage to make the crossover from coffee table to the kitchen table. Mehrotra’s genius in putting together this book shows through in the accessibility of his recipes. I wouldn’t call them simple—most of them call for multiple and simultaneous steps; some need back-up gravies—but each of them is aspirational, the kind a cook of a certain skill-level can think of pulling together on a good day. To that end, the chef initiates the reader early into what he calls his “circle of tastes" – with the very first recipe, one for. In his introduction to the book’s first recipe, for Potato Sphere Chaat, White Peas Ragda, Mehrotra writes, “To me, chaat is a perfect dish, combining different ingredients and tastes—salty, sour, sweet, spicy, crunchy—in one mouthwatering delight which satisfies all our senses." The “circle of tastes" is further explained in the epilogue: “Manish’s ‘circle of tastes’ combines flavours (sweet, spicy, salty, which complement each other), textures (crisp, crunchy), colours and richness to complete the gastronomic experience."

Once the reader has internalized this secret, it’s somewhat easy to break down the recipes that follow. Consider the recipe for Dal Moradabadi, something, Mehrotra says, he used to look forward to before visiting his maternal grandparents in Moradabad, in western Uttar Pradesh. It’s a simple dal, the kind cooked in millions of Indian homes across the country: Split moong dal tempered in ghee with cumin seeds, asafoetida, chopped ginger and green chillies, cloves and black salt. To take it to the next level, he drizzles a tamarind and coriander-mint chutney, tops it with chopped tomatoes and onions, adds a dash of lime juice, and uses as a garnish fried moong dal or chanachur and Bhuknu or chaat masala. A simple idea, but so effective.

As diners at Indian Accent, New Delhi, will know, Mehrotra is a master of Indian flavours, which allows him to intuit combinations and pairings that may not seem obvious. The short introductions to the recipes here allow a glimpse into the way his mind works: A sampling of a fresh-baked pizza base sprinkled with olive oil, herbs and sea salt at an Italian seaside inspires a Chur Chur Paratha (flaky bread) served with Fresh Pesto; an adaptation of mixed vegetable dishes common to many Indian cuisines (undhiyu in Gujarat, shukto in Bengal) goes into a tart shell for a complete meal; a paneer tower invokes the classic aubergine-tomato-cheese lasagna and is served with a Goji berry makhni.

As exciting as the recipes are, they are balanced by insightful commentary. I just wish they were slightly longer and allowed for more of an in-depth appraisal of the mind of the chef.

It is remarkable that most of these recipes call for no equipment more sophisticated than an oven or ingredients more demanding than will be available at the nearest grocery. A hat-tip, too, to the look of the book—this has to be the most sumptuous cookbook ever produced in India. From the superior paper used to the impeccable photography by Chawla (also behind The Bangala Cookbook, 2014), this book is as delectable as an appetizer on an Indian Accent table. Only, be warned, it will leave you very, very hungry.