Build this city on rock and roll

Build this city on rock and roll

On a Saturday night in New Delhi last month, the ghost of Janis Joplin took up residence in the tiny body of Tipriti Kharbangar. The deep, soulful voice belted out song after song to an enraptured crowd of lawyers, students, artists, and even a CEO or two at Haze in Vasant Vihar. Kharbangar and her band, Soulmate, spun the audience dizzy with hard guitar riffs, and a mix of classics and original music. By the end of the night, the entire audience was following Kharbangar, singing at the top of their lungs: “The blues are back!"

In Mumbai, Naresh Fernandes, editor-in-chief of Time OutIndia, watched in amazement as Mango Blue—an Afro-Latin band from New York—blew on horns and trumpets, fiddled on their guitars and turned the audience at the new music club, Blue Frog, into a swirling salsa machine. “I was astonished at how many people in Bombay know how to salsa, and know how to salsa well!" Fernandes says. Live music has suddenly become the hottest ticket in town.

In the past year, live music venues have opened in cities across the country; a strong line-up of home-grown rock talent has begun touring the country (and the world); and new music festivals seem to spring up every month. As you read this, India’s first International Electronic Music Festival is being held at Goa’s Candolim Beach.

But that is no longer the tune rock fans are singing. Café Morrison—a popular south Delhi live music venue—is but one of many bars catering to the musical set around the country. Mohit Panicker, an event manager, says: “When we started in 2005, it was only one or two shows a month. Now there are at least 50 shows a month across Delhi."

Since the 1950s and 1960s, India has had its underground fans of rock music. Amit Saigal, founder of Rock Street Journal (RSJ), India’s first music magazine, says: “For the most part, cover bands were around the scene. From 1965 to 1995, you had maybe five or six original rock albums. It was a second-hand culture."

In New Delhi, a platform for live music came about with Friends of Music (FOM)—an informal association of people who got together and listened to/played music— which started in 1995. “It was started as a place where everyone came to listen to live music, be safe and happy," says Sanjoy Roy, managing director of Teamwork Films and founding member of FOM. Unfortunately, FOM eventually fizzled out.

Then in 1997, with the Great Indian Rock (GIR) show, music hit a new peak. GIR was one of the first rock festivals in India; it started in Kolkata and moved to New Delhi. The entry of GIR, organized by RSJ along with the RSJ Record Label, meant that a new breed of musicians were suddenly encouraged to play “original" music instead of covers.

With the aid of RSJ, GIR, college campus-organized concerts and organizations such as FOM, bands and fans began rising from the crowd. However, it was not until regulations were lowered against bands at bars that the rock scene entered the nightlife circuit. Now, local audiences finally have access to bands and bands have access to venues. “There has been a resurgence in Delhi, with young bands emerging. Bands no longer need to find platforms, but just need to focus on being different to stand out from the crowd," says Roy.

Gradually, bar owners started meeting the demands of a hungry public and, Saigal says, the scene has “exploded over the past year."

“During our first show (in 2005) we had 30 people at the bar, and out of that 10 people were complaining that live music wouldn’t work in a pub," recalls Panicker of Café Morrison. “Today, almost every pub has a live band."

Pranay Das, a New Delhi-based marketing executive, says he has watched the music scene in the Capital develop from the “nascent stage to now being the rock capital of the country."

Half Step Down—a New Delhi rock band—began playing together in 2005, and lead singer Dhaval Mudgal says: “Pubs and bands have gone hand in hand to create this scene. There are more bands playing good music and the pubs are realizing the business potential of music."

From the front rows

In a sign that the rock scene isn’t just meant as some nice background music, dedicated spots are opening around the country. The Hard Rock Café, already open in Mumbai, will open soon in Bangalore and New Delhi. And in New Delhi in early December, the men behind Laidback Waters and Shalom launched a music club at the Hotel Daffodil. Asit Sharma, one of the directors, says Six Month Story will primarily host DJs, but it will start introducing live bands when the managers are comfortable with the club’s capacity. Sharma says they opened the club because there is demand for music venues that host live events. 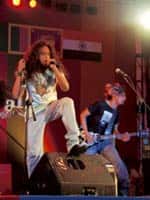 Fernandes of Time Out is a self-avowed music lover. He says whenever he travels, his salary is spent on tickets to music venues around the world. According to Fernandes, Blue Frog blows away its competition, even internationally. “In terms of space, it’s spectacular; probably the best music club design I’ve ever seen. And the energy of the band sparked the energy of the crowd."

Blue Frog’s acoustic interiors were designed by London-based designer Andy Munro (his previous works include Bono and Mark Knopfler’s studios). The club aims to bring in an international act every weekend, while local bands will play during the week. They have lined up international acts till the end of January—Venezuelan band Bacalao Men will play on New Year’s Eve; Ploctones, a jazz band from the Netherlands, will perform in the first week of January; and French trumpeter Erik Truffaz, as well as Norwegian jazz artiste Bugge Wesseltoft, will play later in the month.

An entrance charge (anything from Rs300 to Rs800) will admit you to this high-ceilinged, undulating club where you can sit in an egg-shaped booth and listen to Afro jazz or anything else that the club’s music partners decide to throw at you; to “inculcate a new audience and show people different work," according to Phatak.

The music is spreading past the major cities as well. Rajeev Samant’s Sula Vineyards in Nashik just completed an amphitheatre that will host live music gigs, hopefully starting February. The vineyard is already a magnet for Mumbaikars on weekends. Adding music “seemed like a natural progression." People will be able to “get their blankets, bottles of wine and watch the show."

Of course, the road to aural bliss never runs perfectly smooth. Kishore D.F., owner of Seijo, a Bandra-based lounge in Mumbai, says that two obstacles hold back the music scene. “Bollywood is overwhelming and it pushes everything else out," Kishore says. “And we’re lacking in content. With basic entry-level bands, we’re pathetic." The restaurant moved from four live music Fridays a month to just two because a DJ on the other nights made financial sense. But, Kishore says, there are a few great quality home-grown bands coming up, such as Soul Yatra. “The trend is changing," he says.

Roselyn D’mello, a New Delhi student and a jazz and blues lover, watches music whenever she can. But last year, she only went to one live show. “Now, there’s something happening almost every second day." She mentions a pub show, a festival and a friend’s band rehearsal, all in one week. 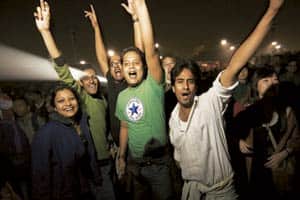 In Bangalore, the 11-year-old music festival, Freedom Jam, kept the scene alive. Performers at the festival included Bangalore legends such as Konarak Reddy, KCP, and an eclectic contemporary mix of music from Lucky Ali, David Rothenberg, Sarjapur Blues Band, Baja, Threnody and Kryptos. A smaller event, the Sunday Jam, is held on the first Sunday of every month.

“There are more than enough people who are hungry for as much live music as they can get," says Sarabjit, lead singer of New Delhi-based Menwhopause.

Competitions have also cropped up that push a rock platform rather than traditional music or more pop Indian vocals. Rather than Indian Idol, for example, audiences could turn to MTV’s Campus Rock Idols for “non-stop head banging, hazardous sounds and complete mayhem," according to the promotions.

And more low-key “jam" sessions take place all over the country. Baljit Mallik, a poet, hosts informal Sunday afternoon music sessions at his New Delhi bungalow. A jazz trio starts the show and the audience join in, singing along, adding a guitar riff, or picking up tambourines and adding to the lilting cacophony.

Themclones, a New Delhi-based rock band, has watched the music scene erupt since it came up seven years ago. Gucci Singh, Themclones lead guitarist, says: “The scene has only gotten hotter. The shows are huge, the crowds are into it; whether it’s a crowd in Chandigarh or a crowd in Bombay, they’re rocking."

Saigal of RSJ says: “It’s not about a type of music. It’s about good music. There’s so much interesting stuff that’s happening in different music and different cultures colliding with each other."

(Aarti Basnyat and Parizaad Khan of Mint and Zahid Javali contributed to this story.)