The historian, aphorized Karl Kraus, is a prophet facing backwards, and perhaps it is this formulation that is alluded to by Simon Schama in the paradoxical title of his new book, The American Future: A History. Schama is among Britain’s best-known historians because of his work for TV; indeed, many of his books have their origins in a BBC series. He is also unusual in that he writes both narrative history and art history, so that alongside his history of Britain and the French Revolution stand books on Rembrandt and 18th century Dutch paintings.

The American Future, which also began as a TV series, is Schama’s attempt to pin down what is so distinctive about the country by travelling across it in a vital election year, and to suggest a tentative map for the future by interpreting the currents of the past. The result is a personal and idiosyncratic history of the US.

For instance, beginning with the US’ current reputation in the world for inflammatory and ill-advised warmongering, Schama tries to explore American attitudes towards the nation and war by looking at its old wars. These include the 18th century war of independence waged by American settlers against the British government, the 19th century civil war, and the decisive American intervention in World War II. He examines the debate between two of America’s “Founding Fathers", Thomas Jefferson and Alexander Hamilton, to reveal the opposing views of military power that have always been in tension throughout the nation’s history.

Jefferson, an idealist and a staunch democrat (this in an age where democracy was still suspected to be a subversive and destabilizing force), believed that the spread of democracy across the world, led by the US, would put an end to war, “except as a last resort to defend liberty". But Hamilton nurtured a more sceptical and conservative view of human conflict, and grander dreams of the US as a superpower. Both envisaged an American empire, but Jefferson saw “an empire of liberty" while Hamilton thought more in terms of military power. It is clear that since the end of World War II, what Schama calls “the Hamiltonian sense of global destiny" has trumped the Jeffersonian dream of the victory of “liberalism over militarism".

Schama bats for the US, though, when it comes to the issue of religion in public life and as a factor in politics. Many people around the world, he contends, are in the habit of taking the radical forces that are the target of American action—say, militant and fundamentalist Islam—and citing the US’ own groups of religious fanatics, such as evangelical Christians, and the bellicose and parochial Christianity of its (former) president as an equally troubling force. But even if this equation of rival fanaticisms is true, contends Schama, it misses the key point, which is that “America’s institutions are designed to protect citizens from religious coercion rather than enable it". 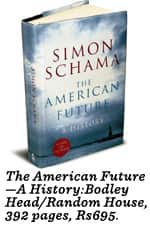 Schama is good again on the subject of the relentless westward expansion of the American state over the American continent in the 18th and 19th centuries, which helped solidify the national cult of self-reliance, relentless optimism and vaulting ambition. “In the Old World you knew your place," he remarks, “in the New World you made it." This rapid colonization of the continent, often at the expense of the native Indians who had occupied it for centuries, is one of the forces behind the distinctive American sense of “the providential allotment of inexhaustible plenty" and the wastefulness of American resource consumption. There is very little space for pessimists or scolds in American politics, as seen in the defeat of then US president Jimmy Carter by the beatific Ronald Reagan in 1980, or even the demonization of Al Gore as “a false prophet of energy apocalypse" in the historic election of 2000.

The pressing issue for the election campaign of 2008 and for the future, Schama believes, “is whether an America of limits can actually be sold to the electorate". He would have been heartened then to hear US President Barack Obama, in his inaugural address to the nation in January, note that “the ways we use energy strengthen our adversaries and threaten our planet" and ask Americans themselves to inaugurate “a new era of responsibility". Should that hope be realized even in part, then we could all look forward to the American future.