He never thinks about you," goes the last line of Saadat Hasan Manto’s brief, searing Manto’s Prayer (the “you" in question being God), “but follows Satan everywhere, the same fallen angel who once disobeyed you."

If Manto sticks in the mind when reading Mohammed Hanif, it is because his writing also follows Satan everywhere, through the anxieties of small, helpless people, with no time for modesty and no escape from the naked and shameless. Devastation balances on a knife-edge with a keen sense of life’s joys; degradation and dignity shadow each other all the time.

This was true of his messy, rollicking first novel, A Case Of Exploding Mangoes, a kind of South Asian throwback to the great political novels of Latin America. It shades into deeper meaning in the more troubling Our Lady of Alice Bhatti.

The movie-star rage of Under Officer Ali Shigri, the protagonist of Exploding Mangoes, is not a luxury the characters here can afford. At the Sacred Heart Hospital for All Ailments in Karachi, no one has the time to dream up political assassinations. They have to keep the hospital going, the police force happy, and Karachi alive.

They are the invisible cogs in the wheel of the big city. And while Our Lady of Alice Bhatti is hardly a perfect success, its biggest triumph is that, half a page into the book, we feel as though we have known them all our lives. 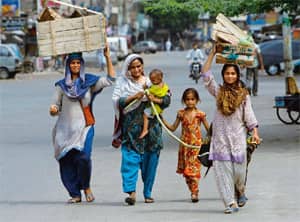 In the background: The characters in Mohammed Hanif’s second novel evoke the invisible Karachi. Shakil Adil/AP

Alice Bhatti is a “Choohra", a Christian from the sweeper community of French Colony in Karachi, treated by most Pakistani Muslims much as she would be by caste Hindus in India. She has been to prison for attempted murder; she needs no Baudrillard to tell her that jails—like the “charya ward" or mental illness unit of her squalid hospital—are perverse symbols of an un-free society. Alice’s aspirations for her future fall somewhere between survival and happiness.

To her surprise, she finds herself courted by, and attracted to, Teddy Butt, the police hanger-on who gets someone to break his thumb in order to be admitted to her care. For a horrifying murderer-type, Teddy has a sort of sweet innocence to him. He isn’t stupid—although he’s no Noor where brains are concerned— but the world is not too much with him.

Teddy is the sort of slightly absurd character Hanif wrote about so successfully in his first novel. Indeed, that knack for the absurd runs throughout his portrait of the Sacred and the lives (and deaths) it harbours. It suspends our sense of normality to experience the charya ward via Alice’s deadpan walkthrough, but it also punctures it when, for example, we read of a cleaner who is said to have died when she slipped down the stairs of an employer’s house; it is not likely that “when you slip on that staircase you’ll also accidentally scratch yourself on your left breast…that during that fall on the staircase you’ll somehow manage to spill someone’s sperm on your thighs."

This, and passages like it, dwell on the darknesses of Manto’s crisp, fast-paced afsanas and make them brutally explicit. Manto’s most famous stories were written about the carnage of Partition, but some crises do not occur in episodes, as Our Lady of Alice Bhatti suggests: They simply go on. 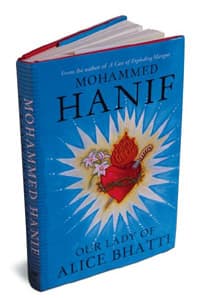 Hanif negotiates a more complex minefield of character and location here than in A Case of Exploding Mangoes. He uses sarcasm to provoke both tenderness and anger, and his writing accommodates both simultaneously. The pleasing, speech-like rhythms of his language (like the repetitions in “that during that fall on that staircase you’ll somehow spill someone’s sperm…") allow us to inhabit the multilingual worlds of Alice, Teddy and their supporting cast with a sense of familiarity.

He can make you laugh and cry on the same page and I—as well as several women reading over my shoulder in a rush-hour Mumbai train—can attest to the fact that he accomplishes this more than once—which makes the bleakness of his story bearable.

But Hanif’s subject demands a more careful navigation of its faultlines. What lets the novel down is a disorientingly loose structure, in which we are walked back and forth in time to piece together the progression of Alice and Teddy’s relationship, and where large gaps appear between one step and the other. Hanif’s compelling characters travel on curiously thin ice; if we are speaking of episodes, it must be said that the book might work better if read as discrete set pieces. The end, with its perverse sense of finality, constitutes an act of violence in itself. Without giving away the details, I may only say that it can colour the whole novel in retrospect.

This is not a minor quibble; a story of such emotional power deserves to be controlled better. It holds back a significant act of writing from becoming a significant novel. Perhaps, in an overall reckoning, the book will speak more clearly to those who already know and enjoy Hanif’s writing than to those looking for an introduction to it.

But the best parts of Our Lady of Alice Bhatti do recall the spirit of Manto’s Prayer. They evoke something that Hanif himself wrote in 2009, in an essay called Alright In Karachi: “The real spirit of Karachi lies…in those who go through the gruelling cycle of life to earn their daily bread with a heart-breaking dignity—who do not have a TV or time to watch it, and who will never be on TV except as a backdrop to the latest bomb attack.

“Here in Karachi, most people have other things to worry about than the fact that the leading current affairs magazines have declared us dead."

Of survival and sainthood in Karachi