The first Roomba, by iRobot, was introduced in the US 10 years ago, in February 2002. While iRobot’s devices are still not available in India, intelligent vacuums are finally here.

Last month, Korean consumer electronics giant LG Electronics launched the Hom Bot 2.0, and Indian firm Milagrow HumanTech, the Power Vac line of intelligent vacuums. Resembling weighing machines with wheels, both the robots are equipped with ultrasonic sensors, cameras and basic intelligence which allows them to map the room being cleaned. The robot knows when to turn to avoid furniture, and “remembers" areas it has already cleaned.

Brushes on the sides and under the robot agitate dust, a vacuum sucks it up and into the dustbin which you empty out later. 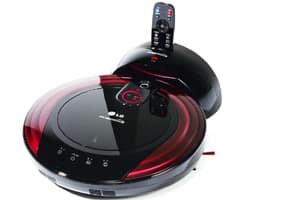 The LG Hom Bot 2.0 is a sleek disc (3.2kg) that moves faster than the Milagrow and offers voice instructions at every stage. The Milagrow robots are bulkier (3.5kg), but even the most expensive one is at least three times cheaper than the Hom Bot.

The first time you run one of these, you will be shocked to see the amount of dirt that has built up over time in your house, in areas that manual cleaning would miss, such as under beds and behind couches. After the first few runs, though, the amount of dust that builds up should be less, and changing the dustbin would be required only once or twice a week. Slippery surfaces and slight inclines are no problem, though, naturally, stairs are.

The LG Hom Bot remembers its last location. So if you have to switch it off for any reason, it will resume cleaning and not waste time going over spaces that have already been vacuumed.

With a height of only 9cm, the Hom Bot can get under just about any furniture in the house, and assiduously works to find those impossible-to-reach corners. Its ultrasonic sensors also mean that it doesn’t bump and retreat, unlike earlier robot cleaners—instead, it can more intelligently detect obstacles and turn in time.

The RedHawk model of the Milagrow Power Vac we tested also comes with a very useful accessory: an emitter which creates an infrared “wall". It acts as an invisible wall the robot will not cross. So, for example, if you want to clean the house but not the bedroom because you don’t want to be disturbed while sleeping, you can set the emitter near the bedroom door, to keep the robot out.

The not so good

The Milagrow RedHawk and the far more expensive LG Hom Bot both have one common problem—sensing wires. Heavy wires, like your AC’s power cable, aren’t an issue, but light wires such as speaker cables don’t register as obstacles until they get tangled in the wheels. It’s bad wire management to leave them out in the open, but if you do have them on the floor, this is something to watch out for.

The same is true for thin carpets—the machines are able to get on to and clean a thick carpet, but a thin one or a light bathroom mat, will crumple under the wheels. Hom Bot has a lower surface clearance (1cm), compared to the 2.3cm on the Milagrow robot, and with the mop attached, it doesn’t go over carpets.

The Milagrow robot will go over a carpet even if the mop is attached, but the additional friction can slow it down, potentially wasting a lot of the battery.

In case of a power cut, the Milagrow docking station loses its cleaning schedule memory, so unless you have a battery backup, you need to keep an eye on the dock, once in a while.

The Milagrow Power Vacs start at ₹ 9,900 for the basic model; this does not have the additional modes such as spiral cleaning or wall cleaning, or a UV filter. The model we tried was the RedHawk, for ₹ 16,990. There is also the BlackCat, similar to the basic model but with a silent compressor for noise-free cleaning (Rs 15,990). The LG Hom Bot 2.0 costs ₹ 43,990.