What an epic disaster

What an epic disaster

From 1988 to 1990, an entire generation spent one hour of its Sunday mornings immobile. B.R. Chopra’s rendition of Mahabharat, on which millions of viewers, myself included, were brought up, was a big moment in India’s television history; it made for millions of childhood memories. 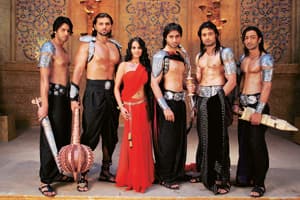 Dress circle: The Pandavs and Draupadi in costumes by Manish Malhotra.

Ekta Kapoor, known for her melodramatic soap operas featuring frenzied mothers- and daughters-in-law, taking up the task of retelling the epic was, to say the least, confusing.

So, by the time Balaji Telefilms’ Kahaani Hamaaray Mahabharat Ki (KHMK) went on air on 7 July, the critics were armed and ready. I decided to reserve my judgement till at least the first episode.

A classic case of the main act failing to live up to its glitzy and sleek trailers, KHMK has reduced Shakuni, the designated villain, to an overgrown child with bad teeth and a rankling laugh, and Draupadi, the devoted and strong-willed wife of the five Pandav brothers, to a shrieking banshee.

KHMK suffers from a bad case of Kapoor soap hangover. Soft focus close-ups, shaky camera angles, repeat sequences — the new Mahabharat has it all. And for some inexplicable reason, lightning and thunder shots grab more screen time than any member of the cast. This probably was Kapoor’s one opportunity to undo the clichéd image of her shows.

Mahabharat has all the ingredients of a complicated, multi-character soap. A sprawling tale of the battle of Kurukshetra between the Pandavs and the Kauravs, it has revenge, hatred and jealousy, not to mention, family feuds on an epic scale. “When we thought of making Mahabharat, we wanted to cater to a completely new generation, one which hasn’t seen (the older version) at all," says Suraj Rao, creative head, KHMK. “We wanted it to be different to make them watch the show."

Decisions on cast and characterization, though, are baffling: why, for instance, is Yudhishthir, the show’s strongest character, portrayed as a victimized protagonist from a Bollywood tragedy, shot in brooding profile, his hair billowing in soft focus? And why are the rest of the Pandavs relegated to dark silhouettes?

Rao has a different take on this, and he might have a point. The actors in Chopra’s Mahabharat, to this day, are associated with the characters they played in the show. For instance, Nitish Bharadwaj is still remembered as the actor who played Krishna and Mukesh Khanna, as Bhishma. Rao says it is tough to accept new actors in these roles and the critics should give them more time.

The show, undoubtedly, does try. It has exotic locales, grand sets, even costumes designed by Manish Malhotra — though some bloggers have questioned why our heroes need to be dressed like extras from a Roman epic.

Speaking of which, part of KHMK’s third episode is a shameless rip-off from a scene depicting the Battle of Thermopylae in Frank Miller’s graphic novel 300, which was later made into a film by the same name. The scene, which shows Yudhishthir fending off a wolf, is a frame-by-frame copy of King Leonidas’ fight with a wild wolf. Kapoor and company can hardly be blamed for the old storyline, but plagiarization is unforgivable.

And the biggest promise, that of new age special effects in all their CGI (computer generated images) glory, falls woefully flat. Besides a generous dose of thunder and lightning, provided to lend gravity to intense dialogues, viewers are witness to hokey time-lapse sequences of passing clouds. True, the CGI looked great in teasers. But, more often than not, the special effects seem entirely gratuitous, and too often, like special effects. During the conversation between Shantanu and Ganga in the first episode, several minutes are wasted panning on visibly fake shots of the river, a decision made all the more perplexing by the fact that the show was partly shot in scenic Ladakh.

The scene of Draupadi’s disrobing is almost exactly as it was depicted in Chopra’s version— swathes of silk fluttering down from heaven in a bid to protect Draupadi’s “honour".

Moreover, unlike the restrained but emotional depiction of Draupadi by Rupa Ganguly in the earlier version, Anita Hassanandani in KHMK makes a howling mess of the character. Ganguly’s portrayal of Draupadi was fit for a queen — sharp but calm, betrayed but stately. Hassanandani, on the other hand, shrieks and screams, reducing this climactic moment to a hysterical farce, compelling me to use the mute button throughout her monologue.

Overall, KHMK is not the sum of all its parts, its multi-crore budget notwithstanding. And it is definitely not a show that will be etched in a generation’s memory.