Aziz Unnisa Tayyaba | An air warrior who settled for less

Aziz Unnisa Tayyaba | An air warrior who settled for less

Aziz Unnisa Tayyaba, 40, was studying for her postgraduate degree and working part-time when she saw the advertisement for recruitment of women officers in the air force. She put the newspaper away and wrote her resignation letter. When her boss at the time told her it was only an advertisement and she had a long way to go before actually being selected by the Armed Forces, she told him, “I have to focus on my goal, I don’t want to get distracted by anything else." She managed to get through and has been a “hard-core" air warrior since, so much so that her parasailing exploits were even listed in the Limca Book of Records.

Last year, after 16 years in the air force, she completed her commission and was forced to retire. She went to the Indian Institute of Management, Ahmedabad, completed the six-month business management course for defence personnel and joined the human resources department of the Shapoorji Pallonji Group in Hyderabad. “I am finding it hard to readjust to civilian life. The uniform (in air force) is a beautiful thing—when I wear it, I feel the pride of serving the nation. And nothing in civilian life can make up for it," she says. 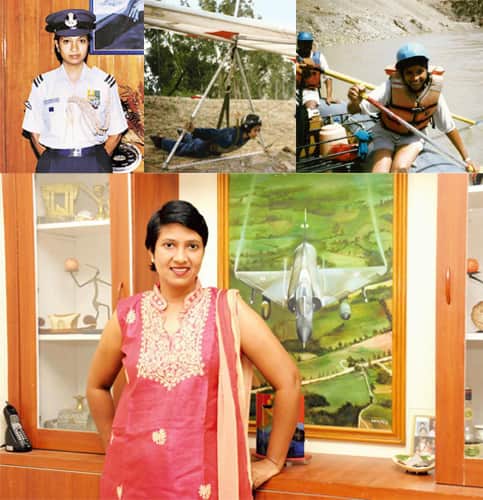 A tough transition: Tayyaba, who now works as an HR professional, says it’s difficult to adjust to civilian life.

The difference in the nature of work between the air force and a company is huge. Tayyaba feels she is “settling for less" here. “In the air force, the human resource person’s challenge is motivating the troops to fight a war. Here, our challenge is to deal with the constant stream of resignations and recruitments. In the forces, before you join you are sure that this is what you will do for 15 or 20 years. Here, people seem to change their minds every couple of years," she says.

Tayyaba tries to use her experience to add new dimensions to her current workplace. “I used to handle welfare in the air force. Based on that, I have started a corporate social responsibility cell here. So it’s nice to apply what I learnt there to my job here," she says. The Delhi high court’s ruling on 12 March has given Tayyaba hope. She can’t wait to go back.

“The kind of exposure you get in the Armed Forces is unparalleled. I miss the physical activities, commanding people, training them, marching the parade with them. Also, the frequent transfers teach you a lot. When you sit in the same place for a long time, a lot of complacency sets in. In the forces you are always on your toes," she says.

Tayyaba also misses the support and camaraderie of the cantonment. Two years after she joined the air force, Tayyaba adopted a baby girl. The sense of community in the cantonment was so great that she never had to worry about who would look after the baby. “Even when she was only six months old, I would just drop her off at my neighbours and go for early morning training sessions. In civil life, it is impossible to have that kind of dependability on neighbours or the community you live in," she says.

Her daughter Tabassum, now 14, read the court verdict and was the first one to call her up and ask, “So when are we going back, mama?" Tayyaba hopes the answer to that is, “Soon."