Strokes of genius amid ordinary fumbles

Strokes of genius amid ordinary fumbles

In some ways, it was different this time. For one, the azaleas were done for the year. Masters week at the Augusta National Golf Club in April is usually a profusion of colour, with the appearance of azaleas and dogwoods timed to perfection. Apparently, the timing was off this year. The flowers bloomed a week earlier, somewhat like the Tiger Woods story. 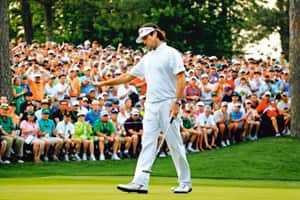 There are also some things that don’t change at the Augusta National. Like seasoned pros sweating over two-footers. Putts being aimed in a direction opposite to the hole. Chips running 40ft past the flagstick. Scorecards littered with double and, at times, ruined with triple and quadruple bogeys.

You take heart when you see the world’s best fumble, identifying with their struggle. Henrik Stenson was on top of the leaderboard standing on the 18th tee on the first day and then staggered off the green a few minutes later with an eight on the par-4. Lee Westwood, leading while coming into the last the next day, three-putted his way to a double bogey.

This is the Masters and it is a golf tournament at a venue like no other. Dramatic changes in elevation (you could fit an Eiffel Tower between the 10th tee and green), weather changes from biting cold to uncomfortably warm in a matter of hours, super-slick and severely undulating greens, some of which fall away into streams and ponds. Throw in a strong breeze and you have a perfect concoction to play mind games with those who actually consider themselves fortunate to tee it up here. Pleasure in pain.

Swing machine: Louis Oosthuizen led the field before being overtaken by Watson. By Streeter Lecka/Getty Images/AFP

If this was to be one long-drawn torture session, I suspect there wouldn’t be too many willing witnesses. Maybe a handful of perverts. It is not so. Spectators line up the fairways 10ft deep on every hole. All the vantage points are taken. The stands are packed. This is a golfing pilgrimage.

What makes the Augusta National special is that among the carnage (in a picture-perfect setting), you also get to see flashes of pure brilliance. Golfers rising to the occasion and delivering blows that you never thought possible. On a roll on the third day, Phil Mickelson comes to the par-5 15th and overcooks his second shot. With no green to work with and water on the other side, he pulls out his 64-degree wedge and takes a full-blooded swing at the ball which shoots straight up in the air and comes to rest 4ft from the pin. I can’t think of anybody else in the world who could have visualized and then hit that shot. He gets to the 18th and after putting his drive in the pines, hooks his approach shot out of the trees to 15ft and makes another birdie. Shots like these almost won him a fourth green jacket, this after a pair of triple bogeys in the tournament.

Come the final round, and Louis Oosthuizen produced the unthinkable on another glorious day under clear blue skies. When the 4-iron hit the golf ball, it sounded like a perfectly struck note. The ball flew to the front of the second green, climbed to the high point and then took the slope to the right. When it disappeared in the hole, it was the first televised albatross at the Masters witnessed in about 200 countries around the globe. The shot catapulted the South African swinging machine into the lead and he was finally subdued by an almost equally spectacular shot by Pinky.

Now what else would you call a man who wields a pink driver and has matching trimmings on his clothing and headwear? The saving grace… He has game.

Stuck deep in the pines off the tee on the 10th, the second play-off hole, Watson saw a gap and hooked a 52-degree gap wedge 135 yards to the front of the putting surface. The ball went on to roll 15ft short of the pin and the self-taught Hubba Bubba two-putted for his first major.