Pranav Mistry | My aim is to get rid of computers

Pranav Mistry | My aim is to get rid of computers

A year after being declared one of the foremost inventors in the world by the Massachusetts Institute of Technology (MIT), which honoured him with the TR35 2009 award, Gujarat’s Palanpur-born Pranav Mistry has proceeded beyond the SixthSense technology that also won him the Invention of the Year tag by Popular Science—the technology is a wearable gestural interface that augments the physical world around us with digital information and lets people use natural hand gestures to interact with that information. Mistry, now a research assistant and PhD student at MIT, was in Bangalore last week to participate in the EmTech 2010 India conference. Edited excerpts from an interview.

Your SixthSense is making waves worldwide. What should we expect next from you? 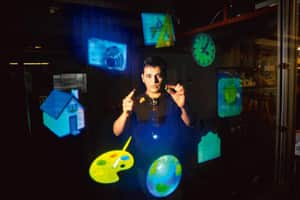 I have also replaced the ordinary camera with a depth-sensing one. So now I no longer use colour markers at the end of my fingertips for the camera to track my finger movements. I am also thinking of having a speaker, instead of projection, so that visually challenged people can use it. Maybe a mix of visuals and voice might work. Another version is to make it sign language enabled, so the hearing impaired can make use of it as well.

My life’s goal is to get rid of computers and invent everything that removes its necessity. It’s about time we stopped asking what the computer can do for us and instead ask ourselves what we can do for the computer. So I am working on an invisible mouse, which is under production at MIT.

A pen or pencil will replace the mouse and keyboard. We humans are very interactive and there’s nothing like direct manipulation instead of working with a complicated thing like a computer. Programming is an art. You need to be creative. Take my Third Eye invention, which is going to be installed in Japanese airports (glasses that will enable people to read news on TV in their native language). It took me 3 minutes to make it work. All I did was remove the cable from some device and use it here. You have to just keep trying. We don’t need new technology to change the future. We just need to change our thinking about it. For example, all the components that are going into my SixthSense technology were created 50 years ago, be it multi-touch or infrared. All I did was change my view of it. To quote Albert Einstein: “We can’t solve problems by using the same kind of thinking we used when we created them."

Has any company approached you for mass-producing your invention?

No, and I don’t want to. I am putting it all up as an open-source code so that anyone can improvise and make it their own. But I am sure Canon will make a pendant camera very soon. Companies need to just know that the idea is good and things will happen.

Why haven’t you put up your invention in the public domain months after announcing it?

First, there are some 50,000 lines of code. Second, some of the components are proprietary, so I can’t upload them without being sued. So now I am breaking my head trying to recreate those codes using my algorithms.

Why not ask others to help you out here?

I am thinking of that. That would remove most of my headache and I can concentrate on other inventions. In a few weeks, I will post the basic algorithm forms online, so people can write and make it their own in Java or any other programming language they like.

But why do you want to give it away free?

I am not interesting in making money. I go to the most expensive restaurant in Boston to have dinner. It is where billionaires come to eat. Even if I become richer, I will still have to go there to eat. After some time, money doesn’t make a difference. I am happy when someone is using my work. I don’t want to be an additional weight on earth. I remember once standing at the Borivali (Mumbai) railway station and one person next to me was SMSing someone in his local language. I smiled to myself, because that was a technology I had developed when I was working with Microsoft on the Akshara project.

What are you working on right now?

I am working on a blink-based robot control programme in Japan. You just blink at a robot and move your head to blink in another direction, and the robot will get the message that he has to move over there.