Film Review | Muscle and the maiden

Film Review | Muscle and the maiden

If the absurd and by now stale Salman Khan logic at the box office works again, the disproportion between his appeal and his complete lack of talent will be more firmly established. In Bodyguard, his new film, Khan’s arms, which seem ossified, have moved further away from his body. His every expression is more robotic and frozen. There’s no semblance of acting—what he really does is puff his bare chest, purse his lips in rage, and stop short of growling. The best action sequences are digitally engineered, so he doesn’t have to do much in that department either. The new-born Lovely Singh (Salman Khan) is rescued by Sartaj Rana (Raj Babbar), an arrogant man of inheritance. Lovely grows up to be a ferocious, fearless, muscle-flexing bodyguard. He flies in the air and springs atop steep peaks to rescue women in danger. So one day, he is hired as the bodyguard for Sartaj Rana’s daughter Divya (Kareena Kapoor)—her life is in danger. Will they fall in love and live happily ever after? There are minor hurdles, including a romance blossoming over telephone conversations and a friend’s betrayal.

The story is replete with crass digs at overweight people, homosexuality and physical disability. Everybody is a caricature; the humour could induce headache or depression—definitely not laughter. Kapoor has a few good moments on screen and she more or less effortlessly plays the sacrificial, ornamental, submissive female, a counterpoint to the invincible bodyguard. 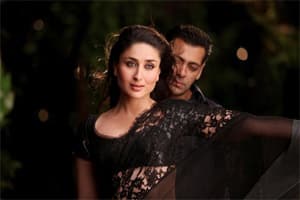 The makers of Bodyguard obviously imagine a nebulous, brain-dead mass audience. They destroy the idea of a culturally vibrant and disparate country which is obsessed with cinema.

Bodyguard is not worth anybody’s money or time. It is a silly, humourless, offensive project, marching shamelessly towards a remarkably thoughtless climax and the puerile goal of making money out of thoughtless replication.

Salman Khan is at his worst; Chulbul Pandey, the enduring police inspector of Dabangg, is a faint memory after this film.