No matter how experienced in les affaires de coeur one fancies oneself to be, when the woman who has written a novel with steamy scenes involving a lot of corporal punishment gets on the line for an interview, it is funny to watch yourself get twisted in knots as you try to ask proper questions and avoid something puerile such as “Do you actually do this stuff?"

The title of Melanie Abrams’ debut novel—Playing—is a term the cognoscenti use for consensual activities involving one person dominating the other, accompanied by pleasure-inducing pain. 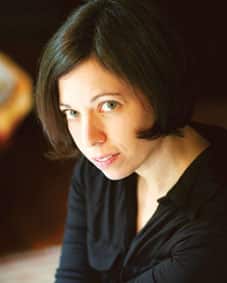 Chandra has returned from promoting the paperback release of his last book, Sacred Games, and the couple’s first child, Leela Sidney Chandra, was born on 6 May.

Los Angeles-born Abrams places her 27-year-old protagonist, Josie, a graduate student of anthropology, specializing in Ghanaian funeral rites, in North Carolina, where the author herself did a master’s degree in fine arts. Josie works as a nanny for Mary, an attractive, divorced doctor who is also the mother of an infant girl and a son, six-year-old Tyler. Josie is drawn to Mary, who reminds her of her own mother, but she quickly develops an even deeper bond with Tyler, whose social skills seem symptomatic of Asperger’s disorder. When stressed, Tyler comforts himself by reciting numerical statistics.

All is well until Mary invites a colleague she fancies, Devesh, over for a dinner party. The Indian physician is drawn to Josie instead. He intuits her unfulfilled sadomasochistic desires, and soon they are in the throes of a passionate relationship, leaving Josie with bruises and welts.

The sex depicted in Abrams’ novel is warmer than, say, The Story of O, an always titillating opus, but cold as a stainless steel table in a morgue. Beyond researching West African funeral rites, the S&M had Abrams consulting Philip Miller and Molly Devon’s Screw the Roses, Send Me the Thorns, as well as Dossie Easton’s Topping and Bottoming books, and large doses of Sigmund Freud. “I grew up in a household of therapists, and I consider myself very psychologically aware, so it was easy for me to get my head around imagining if I had had these experiences, who would I be today?"

Like so many Angelinos, 35-year-old Abrams originally wanted to be an actress. One college English course upturned all that. “It sounds pretty cheesy," Abrams says, “but the minute I wrote something that was fiction, I knew my life was completely changed. I didn’t want to do anything else." Already a published author of short stories, Abrams describes her experience with a new genre: “It was like a master class in writing a novel. I was both student and teacher; there was a lot of rewriting over three-and-a-half years."

An obsession with yoga (Abrams used to teach it) led to a strong interest in India and a visit to the annual Los Angeles-based ArtWallah Festival, where she met her husband. Abrams has begun research for her next novel, about a photojournalist who goes to cover a cult in a Waco-like stand-off.