Snatches of the French avant-garde pianist Erik Satie’s compositions and sentimental Bengali love songs emanate from an ornate “music box" in one corner of The Loft—located in Lower Parel, Mumbai’s erstwhile mill district. Look inside the 1x1x1ft box through a peephole and there’s a video that walks you through an ancestral Bengali home—possibly the part-French, part-Bengali artist Chittrovanu Mazumdar’s own.

Mazumdar’s exhibit is part of Reconstructing (White)³ , an exhibition curated by Himali Singh Soin, which flags off The Loft’s year-long Square Foot Project. Originally a printing shed in an old mill, and utilized as an experimental art project space since 2008, The Loft will be restaged as a studio apartment for one year as part of the project. 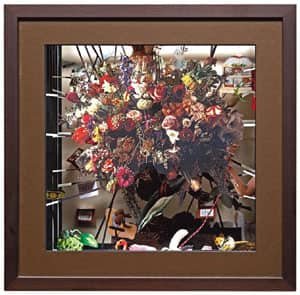 Box stories: The crazy dream that got over (2012) by Hema Upadhyay.

The show, which opened on 23 May, deconstructs the perfect “white cube", giving artists a logistical constraint: to create a work of art that exists inside a 1x1x1ft box fabricated from a material of their choice.

Soin’s line-up of artists covers broad ground, ranging from those like Chaudhari and Soi to Bhatia, an architect, whose art has consistently commented on space and scale. The others, including Mazumdar, Sen and Potnis, have played with notions of memory and reinvention.

The most literal of the exhibits, Sen’s installation is a 1ft cube of ice which symbolically “melted" away on the exhibition’s opening day. Reconstructing (White)³ shatters the white cube. It is up to you to pick up the pieces.

In tune with The Loft’s new avatar as a residential studio—fitted with a bedroom, kitchen and bathroom—the exhibition angles off a fictional character, a woman who occupies this space. The artworks are hidden around her “home": The music box is in the living room, the ice cube is in the kitchen. The viewer must seek them out among the furniture and personal paraphernalia, adding another dimension to the notion of the art gallery as we know it.

Anupa Mehta, independent arts consultant and director, The Loft, says: “Visitors will be compelled to see the artworks along with the furniture. This young girl (who lived here) appears to have left in a hurry but we don’t know why. It’s up to the viewer to construct their own narrative."

Reconstructing (White)³ suggests this sort of meta narrative on several planes. While this is exciting, it puts the exhibition in danger of appearing “over-curated". Consider the things at work: the gallery space as the non-white cube, each of the nine artworks as the non-white cube, the idiosyncrasies of the fictional character who inhabits the space, and finally, the onus on this inaugural exhibition to introduce the year-long Square Foot Project.

Soin introduces herself as a poet rather than curator. Her poetry, which appears in the exhibition as accompanying notes, is elegant but extraneous. For Mazumdar’s Untitled, for instance, she says: “What do you remember? A Banyan tree, a Horse-Chestnut? Return. Carve your name and your lovers’ into their barks. Stained years later, you happen upon it again. This time, you are not alone. They pull you away from it, but the music in your stomach stays."

One of the curatorial interventions, though, is bound to impress: The only perfect white cube in the exhibition is the curatorial box—which houses Soin’s notes.

Reconstructing (White)³ is on till 14 July. The works are priced between Rs40,000 and Rs3.5 lakh. Visit www.theloft.in for future exhibitions that will be part of The Square Foot Project (May 2012-April 2013).