To mark International Literacy Day, Pratham Books will host a reading of Susheela’s Kolams, written by Sridala Swami and illustrated by Priya Kurian, about a girl who makes kolams (or rangoli) in the sky. Theatre enthusiasts Madhu Shukla and Padmaja Nagarur will read excerpts from the book. 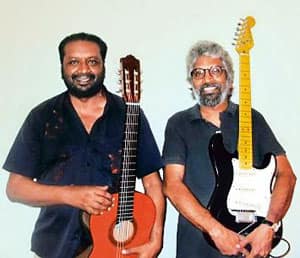 For this group show, Tasveer gallery presented a brief to 37 photographers working in India, including Karen Knorr, Vivek Vilasini, Saibal Das, Mahesh Shantaram, Neeta Madahar and Jyothi Bhatt, “to investigate the subject of still life, and to see how this subject can be explored in a specifically Indian context", says a note from the gallery. The works in the show depict how everyday objects transform with the artist’s eye into a work of art.

The workshop is exploring Indian and European cultures through Hindu and Christian architecture over the centuries in a multi-screen experience through parallel PowerPoint presentations. There are two sessions every day—the first on Christian architecture in Europe, conducted by art historian Ashrafi Bhagat, and the second on Hindu architecture and monuments, by archaeologist and historian Chithra Madhavan.

The Kalakshetra presents a Kathakali festival and a series of lectures by eminent personalities in the field of dance. The lectures and discussions will be on the dance drama Nalacharitham and its creator Unnayi Variyar, and the “modernity" of Kerala’s traditional dance forms. Nalacharitham is known for its blend of rasa abhinaya (emotional acting), nritta (dance) and lyrical poetry. The story follows the highs and lows in the lives of king Nala and his wife Damayanthi, whose relationship faces its biggest challenge in the shape of the evil spirit Kali.

Noël Coward used to describe his play ‘Private Lives’ as a light comedy, intended to amuse and captivate rather than teach morality or advance a particular ideology. The play premiered in London in 1930 and has been produced around the world ever since. The story discusses the themes of infidelity, divorce, marriage, new love and rediscovering love. 1 hour, 40 minutes.

The theme of this year’s edition of the annual festival of classical dance and music by Raja and Radha Reddy’s school, Natya Tarangini, is “Bharatha Bharathi", a celebration of India’s plurality and cultural ethos. The festival will feature a geographical and cultural mélange—vocalist Pandit Chhannulal Mishra of Varanasi from the Kirana gharana (best known for his rendition of the “purabiya ang" in Hindustani classical music) will perform, followed by a solo tabla recital by Pandit Ram Kumar Mishra of the Benaras gharana. Chennai’s Padma Subrahmanyam, one of the country’s seniormost Bharatanatyam exponents, will perform. There will be a Manipuri dance recital by Poushali Chatterjee, a Kuchipudi presentation by Raja and Radha Reddy, a Carnatic vocal recital by T.M. Krishna from Chennai, and a santoor recital by Pandit Shiv Kumar Sharma.

Food fest: Italia at the DLF Promenade has a special menu for the season.

The multidisciplinary arts project, Project Cinema City, has been working since 2007 on the relationship between Mumbai and movies. The project includes 13 installations, photographs, paintings, maps, videos and films on exhibit at the National Gallery of Modern Art (NGMA).

Curated by Madhusree Dutta, a documentary film-maker and director of the cultural centre Majlis, the show displays factual documentation of Mumbai’s film-making practices and artistic interpretations of the images produced by cinema. Dutta has selected artists, architects and film-makers who have engaged with the city in their work, including Atul Dodiya, Pushpamala N., Vivan Sundaram, Tushar Joag and Shreyas Karle.

The annual documentary festival by the non-profit Public Service Broadcasting Trust (PSBT) is back. The screenings this time will be limited to films produced by PSBT (that means no international releases). That doesn’t mean this time’s line-up is any less intriguing, though—watch for films by M.S. Sathyu, Santosh Sivan, M.K. Raina and Sanjay Barnela.

Day 1 will feature films around the theme of “The Politics of Freedom", like Devi Prasad Mishra’s film Whistles And Bullets, Paranjoy Guha Thakurta and Subi Chaturvedi’s Freedom Song, Rita Banerji’s Gaur in My Garden, Geeta Singh’s Light on the Dark Side, Pushpa Rawat and Anupama Srinivasan’s Nirnay (Decision), Geetika Narang Abbasi and Anandana Kapur’s Much Ado About Knotting and Santosh Sivan’s A Farmer From Kuttanad.

The first half of Day 2 will see films themed around “The State of Surveillance And the Contested Self", like Tales From a Place Less Travelled: Azamgarh by Shakeb Ahmed, Subasri Krishnan’s This or That Particular Person and M.S. Sathyu’s The Right to Live. The second half of Day 2 will see films on the theme of “Portraits From Her Diary", such as Sanjay Barnela’s Rough ‘Em Up, Farida Pacha’s The Women in Blue Berets, Nidhi Tuli’s The Saroj Khan Story, and Vasudha Joshi’s Cancer Katha.

Day 3 will feature films based on the theme of “The Burdens of Modernity", such as Sadir to Bharatanatyam by Viveka Chauhan, Ramchandra P.N.’s Rice And Rasam, Nimesh Desai’s The Ageless Tramp, Krishna Bagadiya’s Marine Drive, Ani Thomas’ Memories And Forgetfulness, Rintu Thomas’ and Sushmit Ghosh’s Timbaktu and Vani Subramanian’s Stir. Fry. Simmer.

Day 4 will feature Raabiya Jayaram’s The Rain Child, Zorawar Shukla’s A Prayer for Aliyah, Syed Fayaz’s Vessels of Memory, Keepers of Faith, Meeta Vasisht’s She of the Four Names, Pritam Das’ The Pursuit of Answers and Aparna Sanyal’s A Drop of Sunshine.

Day 5 will see the screening of films themed around “Invisibilized Stories: Notes From the Periphery", such as Malati Rao’s Free And Compulsory, Fathima Nizaruddin’s Another Poverty Film, Chalam Bennurakar’s All About Our Famila, Umadevi N. Tanuku’s Night Hawks and M.K. Raina’s Mann Faqeeri.

Screenings will be followed by discussions with the film-makers.

Transits of a Wholetimer—J. Swaminathan: Years 1950-69

Art history: Transits of a Wholetimer presents a collection of sketches, paintings and letters related to J. Swaminathan.

Balzac And the Little Chinese Seamstress

Based on the 2000 semi-autobiographical novel of the same title by Dai Sijie, the film revolves around two young, poor Chinese boys who are sent to a remote village in Sichuan province for “re-education" during the Chinese Cultural Revolution. Both fall in love with the granddaughter of an old tailor. During the years of intellectual oppression, the three find solace and liberation in a collection of banned Western literature, Honoré de Balzac being their favourite author.

The presentation by danseuse and actor Shobana and her troupe ‘Krishna’ is a musical that blends classical, folk and film dance, depicting scenes of Vrindavan, Mathura and Kurukshetra. The production is an attempt to portray the Hindu god, his philosophy, and why he is beyond man’s understanding.

Sexy@Sixty: Health And Beauty at Every Age

Oxford Bookstore and the publishers Westland will launch the book Sexy@Sixty: Health And Beauty at Every Age, written by wellness specialist Namita Jain. The book will be released by Hena Nafis, consultant nutritionist and founder of Nutrience, a lifestyle and nutrition clinic, and Rita Bhimani, a columnist and communication professional.

Kamala, the retail outlet of the Crafts Council of India, will present a “Puja" exhibition-cum-sale of its autumn collection of textiles. The collection will include Rema Kumar’s woven Tussars from Madhya Pradesh, Odissi dancer Banasri Rao’s hand-painted Kalamkari saris and blouses, handblock printed mulmuls and Maheswaris from Sanganer and Bagru in Rajasthan, and double Ikat Telia dupattas and saris from Andhra Pradesh. Prices, ₹ 350-7,000.

Live In India: Ballads of Soul

All of film-maker Terrence Malick’s characters—from the romantic couple on the run in Badlands to the ruminating soldiers in The Thin Red Line—seem to spring from some Edenic source, only to be trumped by the indifference of the cosmos. So it was inevitable that the writer-director’s lyrical eye would find its way to the myth of America’s origin. In this 2005 film, Captain John Smith (Colin Farrell) and the Indian princess Pocahontas (Q’orianka Kilcher) frolic through Malick’s trademark fields of wheat. Captain Smith arrives on a ship in 1607 to found Jamestown, an English colony in Virginia. The initially friendly natives, who have no concept of personal property, turn hostile after a “theft" is “punished" violently.

Directed by Vikranth Pawar, Raell Padamsee’s production Anything But Love is a story about former spouses Seema (played by Mandira Bedi) and Anish (played by Samir Soni), who run into each other at a restaurant. There’s no love lost between the two, but they’re still turned on by each other, enough to give their relationship another shot even if it means forsaking better judgement and cheating on their insignificant others. 1 hour, 35 minutes.

Gnosis: Akram Khan’s latest is inspired by the Mahabharat.