Football | More than a cup

Football | More than a cup

Ryan Giggs, 38, is going to the London Olympics. His country, Wales, hasn’t qualified for the 2012 Games, but his country, Great Britain, has. It’s the first time in 52 years that Great Britain (or “Team GB", as they’re often called) will play at the Games; with automatic qualification for host nations, it would have been rude not to.

It’s fair to say that none of the other competitive sports on display at the Olympics is watched, played or followed more widely than football. Even so, football at the Olympics has always lived a strange half-life, something of an anomaly: much like Team GB itself. The world’s attention is perpetually diverted from it, although this is truer of some countries than others. 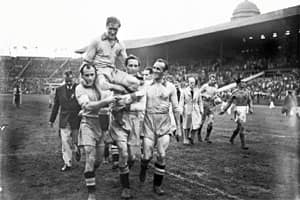 Alternate glory: The Swedish football team after winning gold at the 1948 Olympics. Sweden have never won a World Cup or a European Championship.(Keystone/Hulton Archive/Getty Images)

“In Britain," explains football journalist and historian Jonathan Wilson, “the problem is the notion of a GB football team. In every other football competition, we have the four home nations (England, Scotland, Wales and Northern Ireland) and there’s a great fear on the part of Scotland, Wales and Northern Ireland that if they accept being GB here they’d lose their independent status within Fifa."

Argentina’s win at the 2008 Olympics was Lionel Messi’s first international trophy for his country.(Mark Dadswell/Getty Images)

Olympic football is not quite as old as the Olympics. Historians dispute an anecdote recounting an unofficial match played during the inaugural 1896 Games, between an Athens XI and a team from Smyrna (with Athens supposedly winning). Football was added to the programme in 1900, but seems to have been played by club teams representing three respective countries: England, France and Belgium. In 1904, two teams from the US competed with a team from Canada for honours.

In 1932, football was dropped from the programme of the Los Angeles Games, in view of the newly instated World Cup tournament for football (the first World Cup winners, Uruguay, had memorably won gold in two preceding Olympic tournaments, at Paris 1924 and Amsterdam 1928). It arrived back on schedule for Munich 1936, but by this time all the organizing bodies had arrived at a consensus: The Games were to be for amateur players only.

Leaving out pro footballers meant that Fifa history and Olympic history would begin to diverge irrevocably. Still, at least one legendary team won its laurels at the Olympics instead of the World Cup. The “Golden Team" of Hungary, with Ferenc Puskás, Zoltán Czibor and Nándor Hidegkuti, won gold in a 2-0 victory against then Yugoslavia in Helsinki 1952. But they lost their 1954 World Cup final against West Germany, and never had another chance after the Hungarian revolution in 1956 tore the team apart forever.

“For a long time the tournament was made farcical by the differing rules on amateurism," explains Wilson, who has written a footballing history of Communist Europe, Behind the Curtain. “From 1952-80, every winner was from Eastern Europe because they effectively played full professionals." From 1980-92, the horse trading between Fifa and the IOC grew preposterous as they attempted to carve up the turf: In Los Angeles 1984, professionals were allowed to compete, but European and South American teams were only allowed to field players who had not yet competed in a World Cup.

It wasn’t until Barcelona 1992 that the IOC fully revised its rules to create age-specific regulations. It was here that the under-23 plus three overage players rule was created. A full century passed before the biggest change of all was instated: Women’s football was added to the competition.

Since then, no single men’s team has won both Olympic gold and a World Cup in the same generation. Spain, current world champions, fielded Xavi Hernández and Carles Puyol early in their careers at Sydney 2000, but the team lost the gold to a buoyant young Cameroon: One of the goalscorers, who would go on to be Xavi and Puyol’s teammate at Barcelona, was 19-year-old Samuel Eto’o.

But as always, there remains a chance to predict future success based on the players who will shine at the Games. Argentina’s talented generation may have blown its chance this year, but their arch-rivals have a new one emerging: For Brazil, Marcelo and Thiago Silva will support a U-23 squad which already includes talent like Alexandre Pato, Neymar, and Paulo Henrique Ganso. Midfielders Lucas and Oscar are world champions, too, part of a Brazil team which won the Fifa U-20 World Cup last year. Neither Nigeria, 2008’s silver medallists, nor Ghana, 2009 U-20 world champions, are competing, but other teams do have tricks up their sleeve: Euro 2012 winners Juan Mata and Jordi Alba will be backing up a young Spanish team which won the 2011 U-21 European championship, and includes Barcelona cantera (academy) graduates Oriol Romeu and Iker Muniain.

Then again, Messi’s Argentina aside, the Olympics have always been far less predictable than Fifa tournaments, and no preview could adequately predict success or failure on what is, all said and done, almost the world’s biggest stage. The Olympics, as Arsenal coach Arsène Wenger sniffed earlier this year, may be “for track and field, basically", for European teams and their fans, but all it would take to change that would be one victory. Perhaps Giggs, one of the greatest modern players to be denied World Cup glory with Wales, will make the difference for Team GB?

Out Of The Box

Pep Guardiola was yet to make his senior team debut when, as a 21-year-old defensive midfielder, he captained Spain to a gold medal in the Olympics’ first under-23 competition, where La Roja beat Poland 3-2. Poignantly, the winning final was at Camp Nou, Guardiola’s home ground.

Atlanta’s gold medallists, Nigeria, included young Ajax star Nwankwo Kanu, and bronze winners Brazil were fielding a certain Ronaldo (who, funnily enough, played that tournament in a shirt labelled “Ronaldinho", to distinguish him from an older defender also called Ronaldo). But the tournament’s surprise top scorer was a 21-year-old Argentinian who would make his country wait until 1997 for his first goal in a Fifa competition: Hernan Crespo, who scored an impressive six goals and powered Argentina to the silver.

Spain’s young team in Sydney included players who would go on to shape the fortunes of their club and national teams: men like Joan Capdevila, Xavi, Carles Puyol and Raul Tamudo. However, they were beaten in a penalty shootout by a buoyant young Cameroon, also the winners of that year’s African Cup of Nations. The 19-year-old striker who had evened the score for Cameroon in the final would go on to make history in Spain later in the decade. His name is Samuel Eto’o.

Young Boca Juniors star Carlos Tévez scored 16 goals in international competitions in 2004, just one less than global top scorer Ali Daei (Iran). Eight of those goals came from his magnificent run in Athens, including the winning goal he struck for Argentina against runners-up Paraguay.

Argentina and Nigeria faced off in a repeat of the 1996 final, but a new Argentinian generation was ready for the Super Eagles: Players of the calibre of Javier Mascherano, Lionel Messi and Juan Román Riquelme (a key “overage" addition to the squad) had all made great contributions in the run-up. Two young players stood out, though: Sergio “Kun" Agüero, who scored two goals in a 3-0 semi-final victory against Brazil, and 20-year-old striker Angel di Maria, who scored a breathtakingly cheeky goal to put Argentina up in the final.