With digital cameras now priced at a pittance, most snap-happy photographers rapidly get snowed in under a deluge of photographs.

The Internet now offers several solutions to your photographic problems. Sites on the Web help you do everything — from storing and tagging your pictures to printing your favourite picture on T-shirts for the entire family. 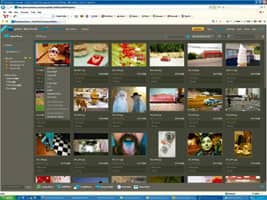 Simple studio: Services such as Photoshop Express let you edit and share pictures with just a few mouse clicks.

Store all your photos online with services like Picasa Web Albums, Photobucket (www.photobucket.com) or the immensely popular Flickr (www.flickr.com).

Picasa Web Albums works well with your Google account and integrates with a great desktop program to organize and edit your pictures. The free version comes with 1GB of storage. Photobucket also offers a gigabyte for free — good for several thousand photographs — and you can make great interactive slideshows with the Scrapblog service.

But the most versatile of the storage systems is Yahoo’s Flickr service. While there is no restriction on actual Flickr storage, you can only upload 100MB of photos a month on the free version.

Amateur photographer T.A. Joseph (www.flickr.com/photos/josephta/), however, uses Flickr for more than just storing images: “Flickr is great for two things — showcasing your work to potential customers looking to buy pictures, and to join communities," he says. Joseph is part of several communities on Flickr that help amateur photographers learn how to shoot and use their equipment. “I use a Nikon D80 and when the camera was launched two years ago, a comunity was formed to exclusively discuss tips and tutorials for the product," Joseph explains.

Peethambaran adds: “Flickr has continued to innovate and develop a fast and easy interface. That’s why a lot of people use it inspite of storage limits."

Both Pixenate (www.pixenate.com) and Picnik (www.picnik.com) help you do basic operations such as cropping, rotating and resizing and advanced editing options such as adding text, tinting, removing red eyes and even giving your photos rounded corners.

Jogesh S., however, still sticks to his trusted old desktop editors: “The editing apps on Flickr and other sites are fairly basic. Good for simply resizing and cropping but little else." Jogesh, a software engineer by weekday and a roving amateur photographer by weekend (www.jogesh.net), continues to use trusty old Adobe Photoshop for his editing.

But now even Photoshop has a nifty online application — Photoshop Express (www.photoshop.com/express) — that has taken some of the simpler functions online.

Mypictr (www.mypictr.com) is great for people with accounts on multiple social networks. The website lets you cut out profile pictures in requisite sizes easily for your network of choice.

Snapfish (www.snapfish.in), now owned by Hewlett-Packard, and iTasveer (www.itasveer.com) both print photos in regular studio-style sizes and also make funky caps, T-shirts, mousepads, key chains and other personalized items. And no, you don’t need an advanced degree in software to get things done. Both services use intuitive online interfaces.

Joseph swears by Zoomin (www.zoomin.com), which he uses to take monthly printouts of his best photographs. “Neighbourhood studios try to do you a favour by fiddling with your pictures. They end up ruining my snaps." Instead, Joseph orders his prints at Zoomin and they get delivered in two days.

Photos on most printing sites start from Rs2.99 each and a plain white cup with a photo and/or text design will cost Rs195 and upwards.

Websites let you do cool and quirky things too. For instance, Microsoft’s brand new Photosynth (www.photosynth.net) lets you build panoramic views of buildings and places by stitching together individual photographs. Then there’s Comeeko (www.comeeko.com) that lets you upload pictures and create your own comic strips out of them. Finally, Panoramio (www.panoramio.com) is a recent Google acquisition that combines geotagging — adding exact location details to a photograph — with the Google Earth application. Start by checking out over 700 location-tagged photos of New Delhi!

Nikhil Narayanan, an engineer in Bangalore, however, has given the Internet photo phenomenon a miss. He still stores images on his hard disks: “Who knows what will happen. One day they will suddenly decide to charge money. And then I’ll have to move all those images somewhere else."

Another rampant threat is that of misuse. T.A. Joseph recounts cases where photographers have had their works stolen and used by bloggers and even national daily newspapers. “I am very careful now," says Joseph who only uploads a few select low-resolution images on his Flickr account.