The last time I stood on these walls, I saw Dubrovnik—her glory, her history, her scars. I traced the slants of orange rooftops all the way to the blue waves. I stood over flowering courtyards and packed cafés. I snuck quick peeks through open windows to get a glimpse of daily life along the walls—classrooms in session, busy kitchens, and drying laundry lines is how the other Dubrovnik lives. I was fascinated. 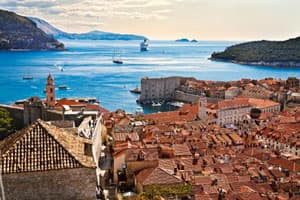 Working up an appetite

“You want to go to Mali Ston," a Croatian friend who lives in the area suggests. “It’s quiet. It’s beautiful, and they have the best oysters. You’ll forget everything else."

Mali Ston was created as a defensive post for the old Dubrovnik Republic in 1335. Looking around the village today, where old Yugos puff around the small one-lane streets and handmade signs direct you towards family-run vineyards and inns, it’s hard to imagine the village as anything but idyllic. It’s only the slithering stone wall puncturing the terraced St Michael hill that reminds you of a different past: one that involved guarding lucrative salt pans, marine farms and vineyards, and watching out for invaders. As it turns out, this defensive wall, the second longest in Europe, was a significant cog in Dubrovnik’s military machine.

Anticipation is a flavouring agent

On one side is the mountain, and on the other is the local bay—this is shellfish territory. Oysters (and mussels) have been a part of the local economy for centuries. Before the Balkan War of the 1990s, approximately half of Croatia’s shellfish supply came from these waters. But when the conflict escalated, Ston and Mali Ston came under heavy fire (as did Dubrovnik). The town burnt and the sea farms collapsed. Locals say productivity is yet to reach the pre-war highs, but it’s getting there, slowly.

It should be expected, I suppose, that everyone is connected to the sea in one way or the other. I walk past kitchen gardens that double up as holding lots for boats. Fishing gear and boat repairs are a common sight. Little children stand along the water wall with bits of string and small buckets. They catch small fish and inky sea urchins that roam the shallow ends. On the water, tour boats and fishing vessels are at work. One of the boats just mooring is the Bota Šare. It’s named after the popular local tavern I am visiting for lunch. The stocky middle-aged captain hands over a crate of fresh fish to a kitchen attendant. Peering into the box, they both seem satisfied with the catch.

Local fishermen use a unique traditional farming technique: They fasten dangling ropes to the bobbing floats; these will hold the oysters and mussels through the cultivation cycle. Oyster farming is a fairly hands-on affair: The oyster seed or spat needs to be collected at the right time and the young oysters are attached to the dangling ropes in clusters. Once cemented, the shells require constant attention till they mature and are ready for harvest. This can take from two to four years; I’m beginning to understand the impact of the war on production.

The menu card placed in front of me is just a formality. This family-owned restaurant is known for one thing: seafood. Any other dish on the menu simply works as a side or an afterthought. I barely glance at it before placing my first order: a portion of fresh oysters or kamenica, as they are known here—a platter of fresh open oysters, grey and white, and plump, served over a bed of ice, with bright wedges of lemon. Digging in is a simple process—a twist of the pepper mill, a splash of lemon, slurp.

“You should come back in March," the waitress chips in as she places another platter of fresh oysters on the table, “it is the best season for Ston oysters."

When I first moved to Croatia, the idea of seafood served with lemon and no spices was incredibly unappetizing. Now as the empty trays pile up next to me, I realize how quickly tastes change. I tip another oyster into my mouth and mark my calendar for the coming year. March, and the oyster festival, is all I can think of; everything else, as promised, is forgotten.