Vithoba Medge, the principal of the Shri Gagangiri Adivasi Shikshan Prasaarak Sanstha in Hiradpada, Thane, came to teach at the residential school for tribal children when it began in 2003. Its long, low-roofed buildings were not yet complete, and the class III classroom where he taught faced the kitchen shed, where school workers turned out breakfast, lunch and dinner for hundreds of their new charges on large, traditional cooking fires. 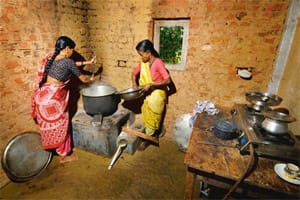 No smoking: Women using an ARTI stove to cook a mid-day meal at a school in Jawhar, Thane. Abhijit Bhatlekar/Mint

Then, last year, the Appropriate Rural Technology Institute (ARTI), based in Phaltan, Maharashtra, offered the school a solution: new cookstoves. By improvising with their own raw materials, putting in some time and effort to train themselves in building the new stove units and paying for the small parts they could not make or manufacture themselves—like the metal grate suspended under the mouth of the stove—they built a unit with four cooking fires, for dal, rice, vegetables and a large, flat skillet for chapatis.

The effect was extraordinary. The cooks found their work time reduced by half, plus there was no smoke or indoor air pollution. Their use of valuable firewood, cut from the spectacular green hills around the area, went down by 40%. The children were delighted that the rice was softer than ever and the phodni (tempering) for the vegetables didn’t overpower their taste buds with its smokiness.

“The chapatis used to be half-cooked," Medge explains, “because no one could bear to stand over the tawa. We used to worry that it would make the children fall ill. But there’s none of that now."

Hiradpada is about 10km from the taluk centre of Jawhar in Thane district. Jawhar bustles energetically, but as the landscape drops away from the road, winding around rolling green hills, dotted with coppices of the Australian babool tree and fields of five-fingered millet, human settlements are fewer, much less concentrated. The population, largely from the Gond and Warli communities, but also others like the Mahadev Kolis and the Katkari, brings children to stay in “ashram schools", essentially large boarding schools where they may stay around the school year.

Smoke from stoves releases dangerous toxins, including carbon monoxide and the carcinogenic benzopyrene. Kitchen workers—mostly women at homes and smaller schools, and males in kitchens like the one at Hiradpada, where there is plenty of heavy lifting to be done—suffer acutely from eye and lung irritation, spending up to 3 hours at a time over traditional Indian stone-and-wood stoves in closed kitchens.

“As for the sheer drudgery involved," says Ramchandra Hanbar-Deshmukh, president, ARTI, and a veteran researcher of rural technology, “no one has ever calculated its effects".

ARTI, which has been working with non-governmental organizations (NGOs) as well as the government to develop rural technologies since the 1970s, has been an NGO itself since 1996. Its work begins with research and development, studying and developing ways to make rural life easier, and also involves evangelizing these technologies in places where basic amenities are often hard to come by. Efficiencies like modern, gas-fuelled cooking ranges require resources to which villages like Jamsar don’t typically have access: The government makes provisions for LPG cylinders in school kitchens allied to its Mid-Day Meal Scheme—but the cylinders rarely turn up. 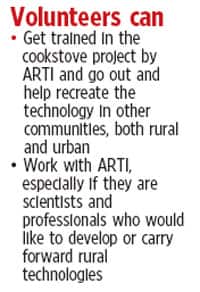 “We don’t build these cookstoves for free," Deshmukh explains. “Something built for free becomes a one-time donation, without much value. That is why we come to these schools and say: ‘Train with us, let us provide the expertise that you don’t have, and use your own money to buy whatever small things you can’t make.’"

ARTI has been implementing its cookstove programme since mid-2010 in various parts of Thane. It is largely supported in this endeavour by the Central government, for whom its work ties in with a broader push to introduce smoke-free cooking to villages. In tribal schools, where hundreds of children come to live and study, Deshmukh hopes that the children will see the changes an inexpensive, simple technology can make to their lives at home, and then carry the story back to their parents and families.

At Hiradpada, as principal Medge invites Deshmukh back to his office for tea and poha, the old kitchen shed falls along the way. “See this," Medge says, and points to the roof of the shed, a grimy, unremitting black. “That’s what the old stoves did."