Film Review | I am Kalam

Nila Madhab Panda’s I am Kalam is a film festival favourite—mostly in Europe. The buzz around the small film has been gaining momentum ever since it premiered in Cannes in May. More home-grown children’s films at the theatres can’t ever be a bad thing. I went with hope.

But alas, there was a poor child in Rajasthan, and there was the European woman with a bleeding heart visiting Rajasthan. The lady visited the boy’s mother in her mud hut. She helped him fulfil his dream to study. It’s a hunky-dory world for spunky Chotu after Lucy’s intervention. And all this told in a boring, and in parts extremely shoddy, way. 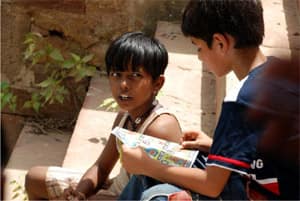 Equal opportunity :Harsh Mayar (left) plays the part of Chotu in I am Kalam.

Stereotypes and lazy writing are obvious from the first scene. There are relevant issues here—of child labour, exploitation of children, the lack of basic education for children in India. But as a film, its disconnect with reality takes a bizarre turn when Chotu, who works at a roadside dhaba, becomes the best friend of the young heir of a royal family. The boys hang out together in the prince’s room while other palace dwellers go about their business oblivious to Chotu’s presence.

Chotu himself is a character with charming qualities and is the film’s only spark. Played by Harsh Mayar, a boy who lives with his family in a slum in Delhi, Chotu christens himself Kalam after his idol A.P.J. Abdul Kalam. He dreams of going to school, wearing a tie and growing up to be a man people look up to. He is resourceful and smart and ingeniously manages to get his way at the roadside dhaba in which he works. The dhaba owner, Bhati (Gulshan Grover), a benevolent man forever in Rajasthani headgear and jackets, is in love with Lucy (Beatrice Ordeix), a French tourist who often visits him. Chotu speaks English with tourists, charms them and becomes his boss’ favourite, which annoys Laptan (Pitobash Tripathy), an Amitabh Bachchan fanatic who also works at the dhaba.

Besides washing utensils, serving food, chit-chatting with white tourists and hanging out at the prince’s chamber, Chotu dreams of meeting president Kalam, whom he hero-worships. After a disastrous run-in with the the royal family (again, royalty is soaked in redundant stereotypes), he decides to run away to Delhi. We next meet Chotu on barricaded roads outside the Capital’s secretariat, asking policemen to help him meet Kalam. Meanwhile, the prince tells his father that Chotu wrote a speech for him which earned him a first prize in school. The king has a change of heart and sends his queen to find Chotu in Delhi and admit him to the local school.

The film’s structure is linear and it is meant to be a simple, heart-warming film about this boy’s dreams and how that dream is fulfilled. It is obvious, the purpose is to spread word about the cause. Why not make a documentary?

Sentimental lapses and a fake earnestness overwhelm the film. Situations are naively thrown in simply to propel the story. There are some flat scenes meant to be humorous—as a film meant for children, it does not have enough pace or humour.

After a while, the easy, insipid world which this beautiful boy inhabits becomes trite—a world which so obviously exists only in the mind of outsiders, or someone completely disconnected with reality.

We don’t see Chotu’s struggles, his moments or predicaments. There’s no problem with a simple fairy tale meant for a cause, but when it reinforces the worst kind of stereotypes associated with the ideas of a country and how white-skinned tourists are in less developed parts of the world, it is thoughtless film-making.

Every tourist who visits the dhaba is white and every one of them is vacuous. Did the writer-director have only a particular Western audience in mind then? I can’t be sure. I am Kalam has an activist heart and a cause to market, but as a piece of film-making, it is ineffectual and boring.

I am Kalam released in theatres on Friday.

Film Review | Rise of the Planet of Apes

Sci-fi thriller : The apes in the film are digitally created.

While using apes for his experiements on Alzheimer’s disease, a San Francisco doctor produces a group of monster apes who unleash a battle for supremacy against humans.