Home to the finest Roman and Byzantine mosaics and the smoothest hummus, spices meet cultures here

On a map of Turkey, the province of Hatay dangles gently from the line of the country’s southern border. Look closely and it almost looks like Turkey is gently dipping its feet into the surrounding area of Syria. Hatay’s history and culture is a rich mix of Turkish, Arabic, Islamic (Sunni, Alevi, Alawite), Christian (Catholic, Greek and Syrian Orthodox, Armenian) and Jewish influences.

A great trading city on the silk route, Antakya (ancient Antioch) gained fame as an important centre of early Christianity. It was here that St Peter built the first Christian church, and Barnabas and Paul preached. Though Antakya is a Turkish city today, these Christian and Levantine influences make it stand apart from the rest of the country.

I first became interested in the history and culture of Antakya through a close friend. Along with a curiosity about the place, she also inculcated in me a love for Antakyan food.

Unlike most Turkish food, Hatay food is famous for being spicy. During long research stints in Istanbul as a graduate student and later while working there, I would go on weekly or fortnightly excursions to eateries serving a mix of Hatay mezes, çok acılı (“very spicy") kebaps and the Antakyan speciality künefe (a hot dessert of cheese encased in shredded phyllo pastry, doused with sugar syrup and embellished with a dollop of cream and sprinkling of pistachios). I preferred the savoury dishes generously sprinkled with the famous pul biber, red chilli flakes also known as Aleppo pepper.

What is now the Hatay province had since 1516 been part of the Ottoman province of Aleppo. As part of the Treaty of Sèvres following World War I, Hatay was awarded to the new French-mandated Syrian state. Historically, the area had always been extremely multi-denominational, and the population of Antakya, in particular, continued to be a mix of Turks, Arabs (of numerous denominations such as Sunni Muslims, Alawites, Greek Orthodox, Jews, Catholics), Syriacs, Kurds and Armenians.

The continued presence of a large Turkish population and its strategic location (largely because the city of Iskenderun would offer Turkey an important Mediterranean port) made the possession of Hatay an important territorial objective of the new Turkish republic. As early as 1923, Mustafa Kemal Atatürk rejected the incorporation of Hatay into the French Mandate, claiming that the area had been a “Turkish homeland for forty centuries" and initiated Turkish propaganda demanding the territory’s incorporation into Turkey once the French Mandate expired in 1935. To cut a long, complicated story short, the Turks were successful and Hatay was fully annexed on 23 July 1939.

Hummus, which is sold in all corners of the city. Photo: Thinkstock.

There were other constant reminders of the Arab influence. The Turkish I heard was often heavily accented with guttural intonations that sounded more Arabic than Turkish, and I often heard people conversing in Arabic. Modern Turkey is built on a staunch linguistic nationalism which has dictated that people speak Turkish. The proliferation of Turkish across the country has been so successful (often under the threat of heavy state reprisal) that hearing anything other than Turkish being spoken by the population of a Turkish city made Antakya seem like a rather peculiar Turkish city indeed. 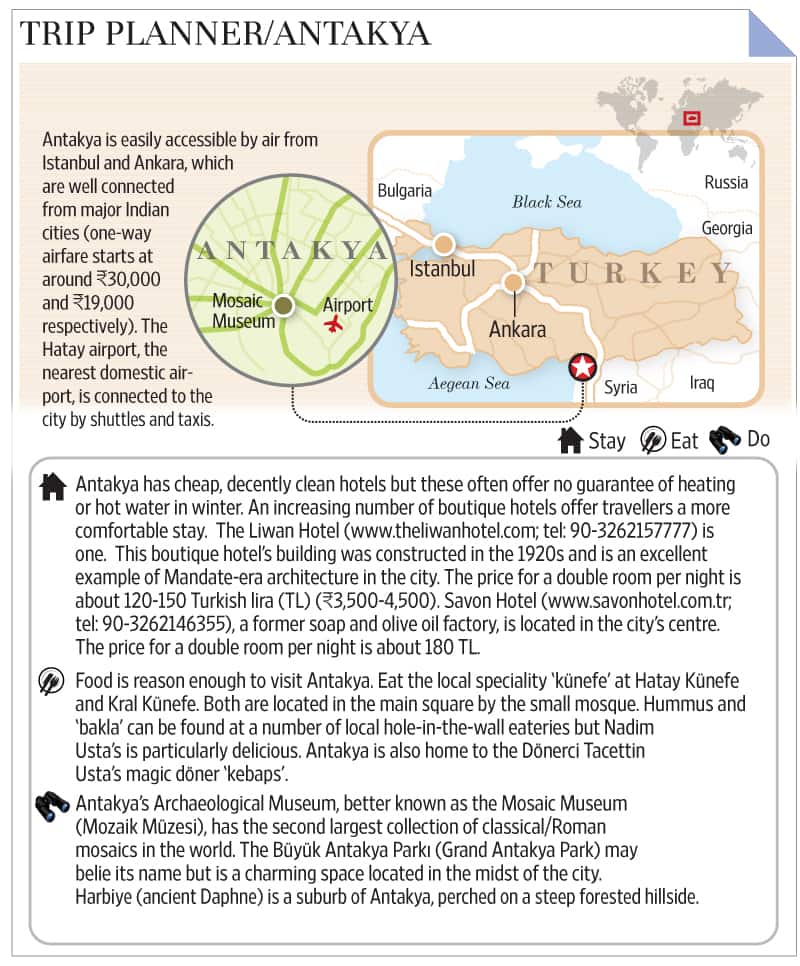 Modern Antakya is not a beautiful city, but there was enough of interest to keep us busy between our eating. The city is home to one of the largest and finest collections of Roman and Byzantine mosaics in the world. We spent a long morning marvelling at the intricacy of the mosaics that depicted Greek gods and goddesses and an astonishingly large collection of fishes and animals. We spent one afternoon wandering through the bazaar district and the sprawling by-lanes of the old town. The bazaar itself was a strange juxtaposition of the tempting (mounds of almost purple pul biber, varieties of the local bay leaf scented soaps) and the bizarre (leopard-printed, sparkle-encrusted dresses).

We had missed St Peter’s church, but we headed undeterred to the small Catholic Church in the city centre. A shopkeeper in the bazaar had told us that he was an Arab Catholic and had invited us to the evening service, which was led in Turkish by the church’s Italian padre. We joined a small congregation, each of whose members took turns giving thanks. After communion, some of the younger members of the congregation took out guitars to play folk tunes while the rest joined arms to form a queue and dance the halay around the central altar table. Such a strange mix of people, traditions and customs could only have happened in Antakya.

Vedica Kant is a freelance writer and researcher based in Istanbul and London.