Forest of the night

Forest of the night

Deep inside the forests of Bastar in southern Chhattisgarh, far from civilization as you and I know it, live a mass of Indian citizens who speak a tongue that bears no resemblance to the major Indian languages; subsist on broken rice, salt, dried fish and roots; have no gods or religion in the conventional sense, and similarly have no comprehension of many basic axioms of democratic politics and market economics. As soon as we look at them, we begin to misunderstand and patronize them: Their minds are almost impossibly foreign. They occupy territories rich in mineral and forest resources, and yet are desperately poor. 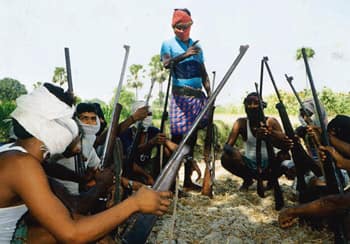 Ringside view: Satnam leaves out arguments on the excesses of the guerrillas. AFP

Finally, alongside these two presences in the jungle, there is a significant absence: that of the Indian state—spoken of in some circles as a rising superpower, but which exists locally in a severely attenuated and debilitated form, and is not interested in implementing its own legislation on matters such as tribal rights over forest resources. It has none of the attributes of efficiency, accessibility, neutrality and trustworthiness that are minimally to be expected of it, and has over time, by its own dreadful avarice and callousness, lost its moral claim to the allegiance of those in its domain. The fascinating story of these three forces is told in the greatest detail, from a point of view sympathetic to the first two, by the Punjabi writer Satnam in Jangalnama, his lacerating memoir of a few months in the forest. 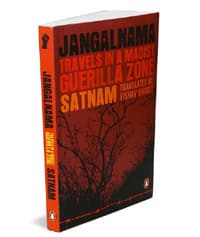 Whatever may be said of them, they at least see the tribals as human beings and grant them a dignity that the machinery of government often has not. By walking in their wake, Satnam is able to personally experience the enormous physical hardship of their lives, as also their sense of community and fraternity, and the ardour of both their fierce hate and love.

But it is in the depiction of the Gonds that Jangalnama touches its greatest heights. Satnam marvellously opens up for us the peculiar innocence, fragility and unworldliness of these people. Most of the Gonds cannot count beyond the number 20. How then are they to imagine that around them lie resources worth thousands of crores in the world market, or even to hold their own in small transactions with shopkeepers and moneylenders? Because of their indigence and ignorance, most of them do not live beyond the age of 50, yet they are not particularly exerted by questions of life and death. Their sense of time is not of minutes and hours, but rather of day and night, of the coming and going of the seasons. Many have never seen a bus or a train, or any of the wonderful machines which are forged from the iron ore that is extracted from sites beneath their own feet. They love to sing and dance, but never individually; theirs is a pre-modern “collective culture" that is now caught up with the very different, highly theorized and ideological, collective culture of the guerrillas.

As with any work of advocacy, there are certain things that Jangalnama leaves out. The guerrillas themselves are probably guilty of more excesses, whether it is violence against dissenting tribals or compromises with contractors and businesses, than Satnam allows. Again, it is not just the guerrillas, but also many individual and organizational voices in Indian civil society, who are agitating for a more just treatment of the tribals, but Satnam appears to have lost faith in the way they have chosen.

Yet, if the first principle of a democracy is that people should understand the needs and realities of those who are most different from them, then this is a book that (even though it rejects Indian democracy) genuinely opens up such an extended passage of engagement. There is an anger in Jangalnama that is neither the desperation and puzzlement of the tribal nor the wrath and ideological obstinacy of the guerrillas, but something else: a sad, fierce, morally lucid and intensely disquieting anger that any reader would do well to experience.

IN SIX WORDS: A sympathetic, moral eye on Maoism