A remarkable cricket memoir full of oddballs, entrepreneurs and fanatics, of a time before the game was buried in money

On the cricket field, the position third man is rarely glamorous or conspicuous. At the same time, it remains an inevitable and necessary presence; few cricket matches can be glimpsed without a player patrolling the area diagonally behind the batsman. It is an apt title for V. Ramnarayan’s memoir, for it is the story of the toiling, talented Everymen who ply their trade outside the riches and fame that accompany the national team, yet whose presence remains indispensable to Indian cricket.

The title also has a specific poignance to Ramnarayan’s life and career. Unfortunate to be competing for a national spot during India’s golden generation of spin, Ramnarayan was the third man behind his contemporaries E.A.S. Prasanna and S. Venkataraghavan, two of the greatest off-spinners the game has seen. His fate was not unlike the great Brazil forwards of the 1960s who could have walked into any other side in the world but were condemned to spend their careers on the bench, primarily because of the unhappy accident of their career trajectory coinciding with a profusion of prodigies.

Ramnarayan was born into a distinguished tradition of Madras cricket, with nearly a dozen members from the family tree who had played at the first-class level. The first half of the book traces his ascent from the lower leagues to the cusp of selection for the national team.

Ramnarayan spins an endearing yarn of cricket away from the glamour of the international game. Here are the stories of those driven by pure devotion, whose enthusiasm, despite scant resources, has done more to nourish and deepen the game’s culture than the mandarins of India’s cricket establishment. Third Man—Recollections From A Life In Cricket is a document of Indian cricket before the explosion of wealth engendered by liberalization, an era as distant from the naked exhibitionism of the Indian Premier League as it is possible to imagine. “On most grounds, the shade of a large tree served as a dressing room and facilities were generally primitive," Ramnarayan writes of his experiences in Madras cricket. “Lunch involved a hurried dash to Ratna Café, Udipi Sukha Nivas, Shanti Vihar, Udipi Home or Dasprakash and back, depending on the venue of the match. The effects of the blazing sun were countered by glasses of unboiled, unfiltered and often multihued water stored in mud pots or brought in buckets that resembled relics dug out by archaeological expeditions."

Even when he began playing first-class cricket for Hyderabad, a star-studded side he represented with distinction for several seasons, his lot did not see too much of an upgrade materially. Whether describing rides to first-class games on scooters or travelling on long-distance trains to matches, Ramnarayan writes of a frugal and altogether more innocent age, far removed from the predatory competition that defines Indian cricket today at all levels.

In one of the many instances that demonstrate the warm collegiality (mostly vanished now), the paceman Habib Khan, from the distinguished Khan clan of Hyderabad, communicates to the author his decision to retire after the conclusion of a game. “Bus, ab bahut ho gaya! It’s time for me to hang up my boots, when batsmen like you can hook me."

The second part of Third Man is devoted to the colleagues and friends Ramnarayan met and observed during his life in cricket. Rarely have the lives of Indian cricketers on the margins been described with such insight, Ramnarayan possessing both the intimacy of a fellow player and the intelligence of a sharp cricket brain. Describing the first-class cricketer Abdul Jabbar, he writes: “The young-left hander was athletically built and quickfooted. His batting was marked by common sense rather than any exaggerated notions of style…He was a good judge of a single, his sense of timing and placement was sound, and his demeanour on and off the field was sober, alert, conservative." 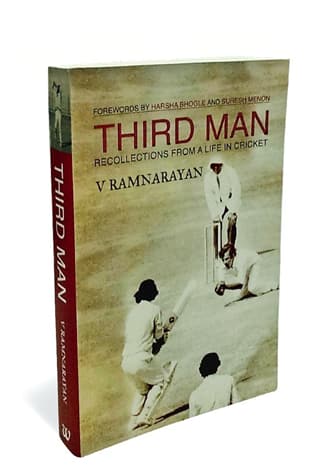 This is followed, towards the end, by Ramnarayan’s thoughts on the game, particularly his own craft of off-spin. “A very popular—and completely nonsensical—cliché is the description of a slow bowler that he varied line and length intelligently," he writes. “Nothing could be more absurd."

His description of other spinners, especially his idol Jim Laker, is cricket writing of the highest quality. Of Laker, Ramnarayan writes: “The ball left his hand and travelled towards the batsman in a perfectly controlled parabola, thanks to the spin imparted by strong and determined fingers that gave the ball—and themselves—a fair rip. The flight of the ball was tantalizing. Like a mirage that fools a thirsty traveller until he gets there, the Laker delivery was almost always not there for the batsman when he reached for it."

One of the biggest problems with contemporary cricket writing is the feigned air of expertise assumed by those who have never played the game. Writers, whose primary job consists of conveying the game to their readers, instead often end up pontificating on the finer aspects of technique. Ramnarayan’s dissection of his craft pricks a hole in the pompous bombast that often substitutes for analysis in our cricket writing.

Third Man is not without its failings. Repetitions occasionally clutter the narrative; at other points, the tale is hobbled by sloppy editing and fitful fact-checking. Any sober assessment of the design quality of the book would probably certify it a disaster. But that has more to do with the mostly poor standards of Indian cricket publishing than Ramnarayan’s craft.

In the end, these are minor irritants in a book that is an invaluable addition to our cricket literature. Third Man is particularly reminiscent of Sujit Mukherjee’s Autobiography Of An Unknown Cricketer, a cornerstone of Indian cricket writing. The late Mukherjee, an academic who briefly played first-class cricket for Bihar, wrote evocatively of those who made the game their life and vocation, without any hope or expectation of reward.

Ramnarayan is as graceful and elegant a writer as Mukherjee, but his account benefits from his greater pedigree as a cricketer, and the fact that he played consistently at a higher level. Despite the many disappointments and near misses of his cricketing life and career, his great achievement is to write about the game almost completely without rancour. Like Mukherjee’s book, this remarkable cricket memoir is destined to be a classic.