Home / Mint-lounge / Features /  Still getting floored
Back
Share Via

When conservationist Abha Narain Lambah was working on restoring the century-old Mani Bhavan, which is now home to a Gandhi museum, she was faced with a problem. She needed tiles—old tiles, to be specific. “Mani Bhavan, where Gandhiji used to stay in Bombay, was built in 1917 and the original, patterned Minton floor tiles had cracked or broken. In some places, these had been replaced with ceramic bathroom tiles," she says, her voice quivering with the horror of it. This travesty had to be addressed and Lambah reached out to the only place she knew which could help: Bharat Floorings and Tiles. “They produced those heritage designs for us without a problem. Plus, the swadeshi legacy of Bharat was an added bonus."

For discerning architects, conservators, interior decorators and clients, Bharat has long been the go-to place for high-quality tiles. Ever since it was established, in 1922, Bharat has been the first choice not just of individuals but also institutions all over the country, and especially in Mumbai.

British-era government buildings, the palaces of maharajas and industrialists, some of the most prominent residences in the country and the art deco flats that give Mumbai its character—they have all been tiled by Bharat over the decades. The company’s files are overflowing with testimonials: “Although 75 years have passed, all flooring is in excellent condition. It is beautiful and is a pleasure to me and my family members and to guests who visit us," reads a letter from the ex-maharaja of Vansda in Gujarat. “Our Readymoney Mansion at Flora Fountain was constructed in the 1920s by my great grandfather, the Late Shri Cowasji Jehangir. Not only are the tiles still existing and in excellent condition but are much admired by ourselves, by many of our tenants and by visitors to the building," writes another satisfied customer.

And yet, this is a company that has no visible public presence—it rarely advertises in the press and its executives are hardly seen in the media. Nor do they give interviews.

“We are what you would call a boutique company. Those who know us, know us. People have been buying from us for generations—the other day, I met a young architect who said his father and grandfather, both architects, had used Bharat tiles for their projects," says Dilnavaz Variava, the non-executive chairperson of the company.

Like her company, Variava too remains a low-profile business person. Having now retired, she prefers to speak about her close involvement in the social sector—she has been, at various times, chief executive officer of the World Wildlife Fund, India, for 20 years; the vice-president of the Bombay Natural History Society; and has served on several Central government committees. But when she begins talking about Bharat’s story, the pride in her voice is unmistakable.

“My father, Pherozesha Sidhwa, who was studying for a law degree, was prodded by a family friend, Jamshed Mehta (who later, after Partition, went on to become the first mayor of independent Karachi), to chuck up his studies and do something which would be of value to the country. Mehta strongly believed that along with political independence, we needed to be economically independent. He ran Nusserwanjee Tiles (Nusserwanjee & Co.) in Karachi and inspired my father, and his nephew Rustom, to set up a tile company in Uran—on the mainland across from Bombay—where our family had some land."

The first factory was set up in an abandoned distillery in Uran, which had shut down after the British imposed prohibition. There was no water, electricity or telephone service; the only way to reach Bombay, the main market, was by fishing boat.

The company was named Bharat because its swadeshi goals were clear; each tile was stamped with a map of pre-Partition India on its back. Bharat wanted to compete with the world-renowned Minton & Co., of Stoke-on-Trent in Staffordshire, England, which had been supplying tiles to the colonies for over a century. Minton was known for its exquisite encaustic tiles, with floral and geometric designs and patterns, but these were made of clay, and were expensive because they were shipped from Britain. Bharat offered more durable cement tiles at much cheaper prices which were longer-lasting and much easier to polish. “My father acquired a new technology from Europe which allowed him to use coloured cement—it really caught on."

Bharat’s tiles became an instant success—even the British Raj’s administrators preferred them for local buildings. Word spread and orders began coming in from all over the country, but the real boost to the business came in the 1930s, when a massive reclamation project in Bombay led to the construction of smart new buildings all over the city, especially in the newly created precincts of Marine Drive and Oval Maidan. 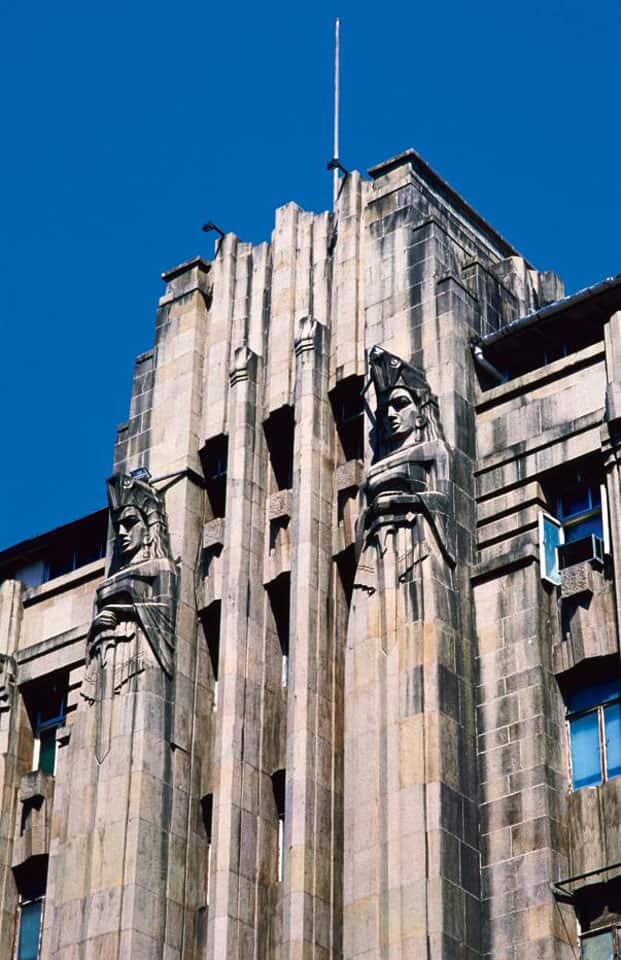 These modern buildings—which in time came to be known as art deco—were a clean break from the past. Where the Victorian and Gothic structures of the city, grand and imposing, had been built by the British rulers, much of Marine Drive, the Oval Maidan stretch and Churchgate Reclamation area was designed and financed by Indians who gladly embraced this new modernism, bringing an entirely new urban sensibility to the port city. The architects and clients both took to the new styles that were à la mode in the West—curved balconies, nautical themes, lattice work and grills inspired by nature and new patterns for flooring ranging from abstract to the most popular of them all, terrazzo tiles.

More than 80 years later, those tiles can still be seen in the foyers, landings and apartments of many of these buildings. “Clients used to ask for different designs on each floor and often our team used to make them in situ (on the spot), because these were one-offs and could not be mass-produced," says Variava.

The terrazzo tiles caught on fast—these mosaic-like tiles were made with marble and stone chips and were cheap and practical. Even today it is fairly common to find terrazzo tiles in Mumbai’s buildings that have lasted for over 75 years. For those who did not want their flat to look like everyone else’s, there were also exclusive designs that were handcrafted and unique: “A handcrafted tile design is a work of art, done by highly trained artisans; unfortunately, it is an art that is slowly dying," Variava says.

Bharat was thriving, but around the 1940s came a shock; the British asked all companies to surrender their cement stocks for the war effort. The tile division of Bharat Floorings and Tiles had to shut down. Sidhwa set up a grinding wheel company that eventually became Grindwell Norton.

It turned out to be a far-seeing decision because the tile business was changing—the building boom of the 1950s and 1960s brought in new players and materials. Cheaply mass-produced ceramic tiles flooded the market. The group had grown, but the tile division languished.

Variava, who was in the very first batch of the Indian Institute of Management, Ahmedabad—1964-66—joined the air-conditioning and refrigeration company Voltas and then moved on to Grindwell. It was only in 1999 that she took charge of Bharat Floorings and Tiles. “The first thing I did was to reintroduce the heritage line. The old moulds were still available, but we introduced a wide palette of colours and had to train new artisans, because old skills had vanished."

The heritage line was a winner with those who wanted a distinctive and elegant look to their homes, bungalows and farmhouses, as well as with restorers. “The (Royal Bombay) Yacht Club, Bhau Daji Lad Mumbai City Museum, Bombay Gymkhana and so many more old structures have tiles from our heritage collection," she says with pride. The heritage line is in perpetual demand, not just from restorers but also architects who want to give new properties a distinctive feel with floor art.

Bharat’s new line has a good mix of modern and old. Variava does not get involved in running the company—that is handled by her son Firdaus. But now that the company is about to complete a century of tile-making for some of the most significant Indian buildings of the 20th century, she has been thinking a lot about its remarkable history and how best to commemorate it.

Sidharth Bhatia is a founding editor of The Wire. His latest book is India Psychedelic: The Story Of A Rocking Generation.