Milind Sovani | We want to corporatize the catering segment

Milind Sovani | We want to corporatize the catering segment

As celebrity chefs go, Milind Sovani looks nothing like one. He is neither foul-tempered, nor foul-mouthed. He doesn’t look like he’ll bite your head off if you ask one question too many. The chef, who owns one of Singapore’s finest Indian restaurants, was part of the kitchen teams of prime ministers Indira Gandhi and Rajiv Gandhi, and has won multiple awards, looks more like a genial history professor than a Gordon Ramsay. Sovani is now a consultant on menus to Indian Cookery Pvt. Ltd’s (ICPL’s) Gold Leaf Banquets. He was in New Delhi recently for the launch of ICPL’s new gastro lounge, Sura Vie, on Janpath, and spoke to Lounge about experimenting with Indian cuisine and rescuing it from its curry-house past. Edited excerpts:

Tell us about your association with Indian Cookery Pvt. Ltd. 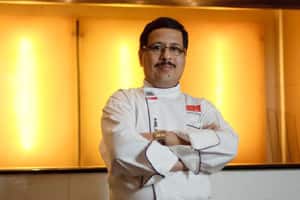 Gold Leaf Banquets specializes in premium customized catering. We wanted to corporatize this segment. It has huge potential. There are hardly any big corporate players, despite it being very lucrative—corporate events, designer parties, weddings, destination weddings, conferences and seminars. There’s only a handful of restaurateurs or five-stars serving the bulk of the segment. Gold Leaf has tied up with celebrity chefs and experts in various regional cuisines to come on board as consultants to supervise menus and ensure standards. I am one of the chefs designing the menus.

Song of India is regarded as one of the top Indian restaurants of Singapore. What’s your signature cuisine?

Song of India opened in 2006. We serve modern Indian cuisine in a fine-dining ambience. The restaurant is located in a renovated heritage structure from the colonial era. So we had to maintain the exteriors as they were. It’s a beautiful building.

When you think of Indian restaurants abroad, you think of names like Taj Mahal, Sheesh Mahal, and they all serve rich, spicy curry- and kebab-based food. We didn’t want to go that way. So we were searching for a suitable name. We wanted a name that said this was an Indian place, yet hinted that this was much more than the regular “Indian" stuff. The designer whom we hired to do the interiors was landscaping the garden and had these lovely plants. He said it was called Song of India. And we had our name. So we are essentially an Indian cuisine restaurant, but we are not afraid to experiment and update the cuisine.

How do you define ‘contemporary Indian’ cuisine?

In most cuisines, there is a respect for the base ingredients. But in India, we overwhelm it with all kinds of masalas and make it into one homogenous curry. Contemporary or modern, call it what you will, is basically reinterpreting the cuisine keeping in mind modern sensibilities, respecting the ingredients as well as being true to your roots. For example, one of our top sellers is pan-seared foie gras with star anise masala. It’s an attempt to rescue the cuisine from its curry-house image. The cooking techniques and presentation draw from Indian and international cuisines. A lot of Chinese chefs are also doing the same thing with their cuisine. My Humble House is an example. It is one of Singapore’s most awarded restaurants.

How did the idea for contemporary Indian evolve?

I was working for the Singapore-based Jhunjhunwala group, the group that runs Rang Mahal at the Pan Pacific hotel, as its corporate chef. The group was looking to open its first Indian restaurant without curries, Vansh. I called the menu Three T—teppan, tapas and tandoor. The decor was also very lounge-ish, very contemporary, the concept was based on the Buddha bars. We had a show kitchen. In fact, we were the first to put the kitchen bang in the middle of the restaurant. Indian food is thought to be too messy and no Indian chef dared to cook in plain view of the guests, fearing the mess might put them off. But in our kitchen we didn’t have any glass partition, it was like a bar. The guests were free to walk in and see exactly how our chefs were working. The show kitchen made us up the hygiene factor. And got great response. The idea of developing Indian cuisine as a modern one without compromising on the authenticity of tastes grew from there.

You are quite a crusader when it comes to kitchen hygiene, aren’t you?

I am. In fact, I was recently part of a Brihanmumbai Municipal Corporation (BMC) initiative in Mumbai to standardize kitchen hygiene. It faced a lot of opposition from local restaurant owners, but it is a very important issue and can’t be ignored. Health is an important question. People are increasingly becoming conscious of what they eat, how they eat and we can’t take them for granted. It is to our advantage to clean up our act because any negative comment about hygiene can sink a restaurant.