Precious Ramotswe is the owner and detective at the No. 1 Ladies’ Detective Agency, Botswana’s only detective agency run by a woman. From her office in the middle of a shopping area, Ramotswe solves problems of philandering husbands, missing dogs and ravenous alligators. Ramotswe is no Sherlock Holmes or Remington Steele—her cases do not require acute intellectual insight nor does solving them involve putting herself in adrenalin-packed, high-speed life and death chases. Much like the well-loved series written by Alexander McCall Smith on which it’s based, HBO’s television show The No. 1 Ladies’ Detective Agency is uplifting and comfort-inducing. 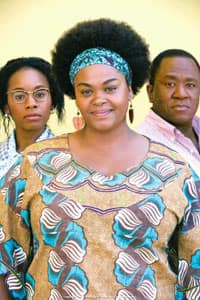 Though clients take a while to come and when they do, not all of them turn out to be paying customers, the agency gets well on its way to solving problems. Each episode introduces new characters as Ramotswe tracks down witchcraft practitioners, insurance fraudsters and dentists without licences.

Even for those who found the books dull, there are two compelling reasons to watch the show. One, the character of Precious Ramotswe is played by Grammy winning R&B singer Jill Scott, a woman who’s comfortable with her generous proportions, is a welcome change from the size zero, perfectly ironed-haired women who populate the English shows we get to watch. Second, the series is shot in Botswana and it shows Africa like you have never seen before on a TV screen.

Botswana is beautifully nuanced and colourfully shot, and even references to the great AIDS tragedy of Africa is shown through the multi-hued prism of an orphanage playground than a hospital ward of the dying and the destitute.

Anthony Minghella, who won an Oscar for The English Patient and whose previous credits include Talented Mr Ripley and Cold Mountain, directed the pilot for the series.

This was the last screenplay he directed and he called it “his slow seduction by Botswana". Minghella’s sudden death threw the future of the series in doubt but producers BBC and HBO decided to go ahead with the series anyway.

Scott is a perfect fit of “traditionally built" Ramotswe character that McCall Smith described. Anika Noni Rose does a comical turn as her secretary Makutsi, who repeatedly reminds us of the 97% that she scored at the Botswana secretarial school.

The music, composed by Minghella’s long-term collaborator, Gabriel Yared, is outstanding. It almost seems to play a part in the plot; it’s full-blooded, African and wonderfully uplifting.

The No. 1 Ladies’ Detective Agency is different from HBO’s other successful shows such as Six Feet Under, True Blood and The Pacific. The drama is subdued and the pace leisurely. It lacks the breathless excitement of tasting a multi-textured cheesecake in the newest bakery downtown but provides the warm and fuzzy comfort of eating mum’s sponge cake straight out of the baking tin.

The No.1 Ladies’ Detective Agency debuts on HBO on 11 September at 9.45am. Subsequent episodes will air at 10.45am on Saturdays.