Net loss: End of the Volleyer

Net loss: End of the Volleyer

The skies and the earth both betrayed Tim Henman.

The former British No. 1 men’s tennis player (now retired) was done in twice by elements of nature—rain and grass—in his quest for the holy grail or, in this instance, a Wimbledon title.

In the 2001 semi-final against Goran Ivanisevic, he led for the most part in the rain-interrupted match spread across three days. The final rain break broke his rhythm and Henman lost in five sets. The next year, Henman, playing his fourth Wimbledon semi-final, faced the then No. 1 ranked player Lleyton Hewitt, who was in the last four for the first time. Henman, the quintessential serve-and-volleyer on his favourite surface, grass, versus a baseline slugger. Hewitt beat Henman and went on to win Wimbledon that year. Both Ivanisevic and Hewitt never won the title again. 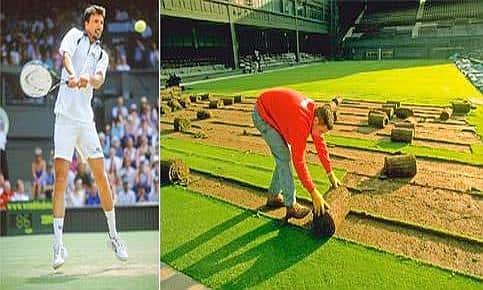 High on grass: Goran Ivanisevic hit 212 aces in seven matches in 2001 (Clive Brunskill/Allsport) ; and (right) a new Court No. 1 being constructed in 1996 at the All England Lawn Tennis Club (Graham Chadwick/Allsport).

In 2002, as Henman too must have realized, the dominance of serve-and-volley players at Wimbledon was beginning to end.

Since John McEnroe won his last Wimbledon in 1984, wooden rackets have gone into oblivion and been replaced by modern-day graphite ones. Over the years, through the late 1980s and 1990s, these hi-tech rackets aided rocket serves that invaded tennis, but were particularly useful at Wimbledon. Boris Becker, who won the title three times, was nicknamed “Boom Boom" for a reason. Stefan Edberg was known as much for his elegance as for getting within inches of the net for his volleys. Pete Sampras won seven titles there. Players such as Ivanisevic (who served a record 212 aces during his seven matches in 2001), Michael Stich and Richard Krajicek won their only Grand Slam titles at Wimbledon because the fast surface suited their huge serves.

“The serves are too dominating in men’s tennis and there are no rallies any more. We have to slow things down so that people can appreciate (tennis)," said three-time Wimbledon champion McEnroe, 52, in a 2000 interview to David Letterman on his popular TV talk show.

And so it began. The All England Lawn Tennis and Croquet Club (AELTC) changed the grass at Wimbledon in 2002 to alter the pace of the game. The new grass was 100% rye grass; the old one used to be 66% rye and a mix of fescue grass and brown-top or bent grass more commonly found on golf courses.

Eddie Seaward, head groundsman, AELTC, says The Sports Turf Research Institute based in Yorkshire, England, carried out an independent study and found that rye grass was more durable than other types. “The brown-top and fescue variety of grass did not survive with the modern footwear and maintenance of the grass courts was difficult," he says on phone.

Apart from durability, it also slowed the pace of the game. Unlike bent grass and fescue that grow sideways, rye is stiff and grows straight up. In the earlier composition of grass, the ball would hit the surface and shoot through, which used to be good for volleyers. Now, the air passes through the grass quicker, drying up the soil underneath a bit more and making the ball bounce higher and slower, explains Seaward.

Andrew Castle, a former British tennis player and now Wimbledon commentator for the BBC, says: “Now, when you volley, the ball sits up; so it’s easier (for the opponent) to make a passing shot. It has made serving and volleying on both first and second serves impossible."

Since Hewitt won the title in 2002 (the first year with the new grass), the now No. 3 ranked Roger Federer and world No. 1 Rafael Nadal have dominated Wimbledon. Defending champion Nadal, a powerful baseliner who has tasted more success on clay (227 wins, 18 losses) than on any other surface, has played in four Wimbledon finals, having won two of them. Federer won all of his six titles here after he switched to playing from the back of the court, as against playing serve and volley in his early years at Wimbledon.

“Federer grew up on clay courts, so even though he used to have a serve-and-volley game when he beat Pete Sampras (only time they ever played, at Wimbledon in 2001), it is not in his blood to serve and volley," says René Stauffer, Swiss journalist and author of Federer’s biography, The Roger Federer Story: Quest for Perfection. Part of the reason why Nadal is tough to beat at Wimbledon, Stauffer adds, is because “he has a psychological edge, having usually done so well at the French Open just two weeks before Wimbledon starts". So Nadal does not have to switch his style of play from clay to grass.

“Federer is a good volleyer. If he thinks he can’t win by serve and volleying, then nobody can," adds Castle.

It’s also the heavier balls introduced in 1995 that have made grass courts inhospitable for the serve and volleyers, says Vijay Amritraj, a former quarter-finalist at Wimbledon. Amritraj, a former captain who preferred playing Davis Cup ties on grass, says this is also one of the main reasons why European players have had more success at Wimbledon in recent times, as compared with Americans and Australians dominating from the 1970s-90s.

“Racket manufacturers had already got ahead of time; a reversal of technology could not have happened. Hence, the only thing they could do is tamper with the grass and the balls because tennis on fast courts had become a one-shot game," says Amritraj, who points out that though McEnroe was a serve and volleyer, he used to “beautifully manoeuvre his volley at the net, not overpower his opponent, because he played with a wooden racket".

Blunted serves and longer rallies have also changed the way coaches train youngsters these days—to play from the baseline. “Consumer demand," as Amritraj puts it.