Girl with the golden bow

Girl with the golden bow

It might just be in the way her gaze freezes while sizing up a distant dot. But there is something about Deepika Kumari (aside from her dimpled smile).

There she is, at the training ground in Jamshedpur’s Tata Archery Academy (TAA). It’s just past breakfast time, and Deepika is, by now, a few hours deep into her daily regimen—her 5ft, 4 1/2-inch frame standing erect under the sun, arms straight and still, eyes narrowed to a hawkish slice, the bow perfectly anchored, the string stiff against the side of her lips and chin, ready to hit the yellow-circled heart of a target 70m away. Twang, she lets go of the arrow, which swishes through the air carrying with it a faint whistle, while the bow collapses around her hands and rebounds against her thigh.

A gap of a few seconds and it’s time to take position again, till Deepika has shot right through 8 hours of daily practice. Arrow after arrow after arrow, like yesterday, like it’ll be tomorrow—a meditative monotony that, really, is the bullseye of her game.

In terms of the long history of archery in India—her early knowledge, like for most of us, is from centuries-old mythology and epics—Deepika is but a toddler, having first held a traditional handmade bamboo bow in 2007 after being goaded towards the game by her cousin, Vidya Kumari, herself an archer. 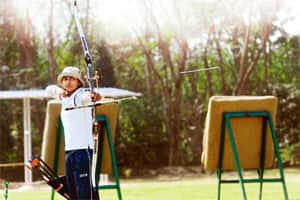 Unwavering: Deepika has a total haul of 18 medals at international events. She hopes to add an Olympic medal to that list. Indranil Bhoumik/Mint

To put Deepika’s prospect as an archer in perspective, in June, the Ranchi-born archer will turn 18.

A month later, having already qualified, she will take aim at the Olympics in London, as one of India’s shiniest hopes for a podium finish. “Going by her current form, expecting an Olympic medal from her is natural," says Purnima Mahto, coach of the Indian women’s archery team. Understandably, Deepika is heavily sheltered by TAA’s South Korean coach Lim Chae Woong and Mahto—her phone number is not shared, interviews rarely allowed, the media is briefed beforehand.

At her village home, 12km from Ranchi, an Olympic medal, says Deepika, is the only one missing from the family showcase. We sit on the lush green practice field at TAA, and in between questions, Deepika ties little knots with blades of grass. Half her face is shaded from the sun by a hat and quite often she keeps her eyes lowered when talking. Occasionally though, those eyes light up when asked such seemingly dim-witted questions like: “Will you beat yourself up if you don’t get an Olympic medal?" “There is no question of that. I’m getting a medal, bas," she says, almost shooting right through the core of cynical journalism with a sunny youthful confidence that coach Mahto thinks is Deepika’s biggest asset.

Only a few years ago, Deepika heard herself telling her father, Shivnarayan Mahato, “Papa, think of me as your beta (son)." The family, including two sisters and a brother, went through numbing financial crisis after the shop that Mahato ran closed down, and her mother Gita Devi’s salary as a nurse in a government hospital became increasingly erratic. “There would be problems at home and the situation became such that there wasn’t enough to eat. To tide over, papa drove an autorickshaw in Ranchi," remembers Deepika, the tone of her voice taking in a distinct peppiness as she speaks. There is, as is now known, a happy twist to her tale.

Having earned, as she admits, over ₹ 37 lakh in prize money after her Commonwealth and Asian Games feats, Deepika’s father has not only overcome his initial reservations against archery as a profession, but now is the proud owner of a Tavera, she exults, after pondering over the name of the car. She handed over her entire earnings to her parents who have since “wisely" invested in property and other assets. On his part, Mahato has not given up on two things: the autorickshaw, which he continues to ply, and his desire that Deepika, a class XII student of humanities at Jamshedpur’s Karim City College, continues with her formal education. “Even now when papa calls, he’ll first ask me about my studies and only later about archery." Unaware of the fairytale-like contours of her story, Deepika rewards listeners at the end with that deep-dimpled smile.

It would not have been so had Meera Munda, wife of the Jharkhand chief minister Arjun Munda, not admitted Deepika, even after having failed the initial test, to the archery academy that she runs in Jharkhand’s Seraikela Kharsawan. That was in 2007, an event that Deepika admits to be life-altering. In 2008, after joining the residential TAA, Deepika didn’t stay for more than a day at her parents’ home for three years. “She would only train and her world revolved around archery," says coach Mahto. “I have hardly found any archer of her age so disciplined, hardworking and focused." The coach recounts an occasion when Deepika, at a competition, went on shooting despite a shoulder injury from which she was crying out in pain.

“I have proved to be a beta for my father. An Olympic medal might help me prove to the world that girls like me too can win if only they are released a little from the strict regimentation at homes."

That seems like the bigger aim, as we walk to the target. One by one, Deepika pulls out the arrows that she had earlier shot from a 70m distance. All of them have pierced the innermost highest-scoring yellow bands— three eights, three nines and four 10s. Her eyebrows knit together for a moment, as if Deepika was expecting all 10s.

But eventually, the dimples deepen and she smiles.