In this age of easy photoshopping, most movie posters seem to follow the same formula: photographic images of actors superimposed on a blurry background. Hand-stitched tapestry, folk art and Mughal miniature paintings? Unlikely.

We picked four recent film posters that break away from this formula. Not surprisingly, they are of independent films with unusual themes which won prizes at international film festivals. The posters have been made by young visual artists who are creating catchy, effective commercial art across fields: from illustrations for books, magazines and album covers to branding solutions for products, restaurants and music festivals. 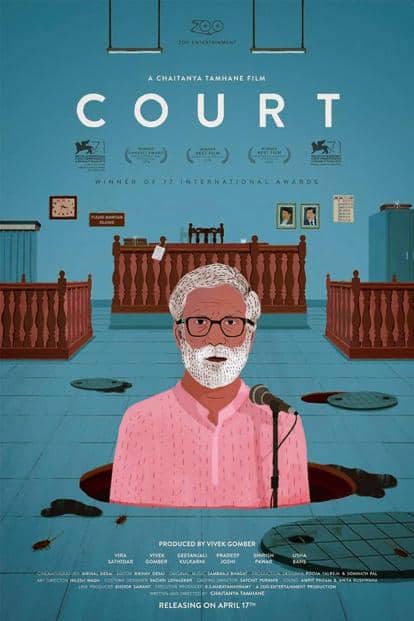 Poster of the film ‘Court’

The poster conveys the absurdist tone of Chaitanya Tamhane’s 2015 film with a stroke of magic realism: a man in a manhole at the centre of an empty courtroom. He is Narayan Kamble, the Dalit balladeer and one of the protagonists of Court, which won the National Award for Best Feature Film in the same year, who is convicted for performing a song that was alleged to have encouraged a sewage worker to kill himself. The poster, conceptualized by Mumbai-based graphic design company Pigeon & Co., was executed by freelance graphic artist Nishikant Palande.

Palande, who studied at the JJ School of Art in Mumbai, says he wanted to create something that had an old, tactile appeal as well as a clean, minimalist look. For this poster, the 34-year-old artist, who says he is drawn to Indian artistic traditions, used an American Pepsi ad from the 1960s as a major reference point, keeping the dominant colour blue to symbolize Dalit identity. 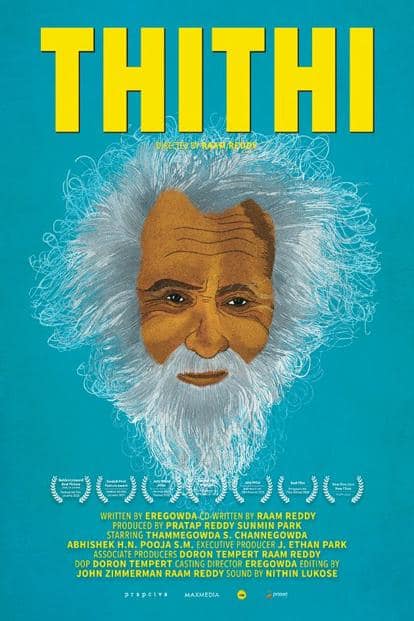 Poster of the film ‘Thithi’

There is more to the deceptively simple but striking poster of Raam Reddy’s Thithi than meets the eye. The soulful face of a 100-year-old man—Gadappa, the film’s eccentric protagonist, whose impending death becomes an event in his village—is set against a cool turquoise background, which lends it a fun, light tone. The big, bright yellow font of the title signifies the film’s colourful and chaotic world. From the wrinkles on his skin to each strand of hair—and our favourite, a few strands of beard falling over one of the laurel-leaf award icons below—the tiniest details of Gadappa’s face are beautifully realized by Juhi Agarwal, a Bengaluru-based freelance artist.

Agarwal says Reddy wanted her to use some kind of “hand art" in the poster, an extension of the film’s organic nature; Thithi, which was released in 2016, was filmed in a real village with amateur actors. The 24-year-old from Kolkata actually used hand-stitched tapestry to etch out the face. “Gadappa’s face was done in Delhi, the eyes in Bengaluru and the hair in Kolkata," says Agarwal.

“For the six months I worked on the poster, I had to travel between the three cities. The stitching was a delicate job and although it hasn’t been done by me, I had to be with the embroiderers when it was being made, direct them, tell them details like how the colour needs to be mixed," she says.

The process began with a digital image of the face being printed on the fabric; this was then hand-embroidered. Once the stitching had been completed, the three separate layers—the beard, hair and eyes—were scanned digitally and combined.

Agarwal says that just like other aspects of film, such as sound and lighting, film advertising too has evolved. “It is intended as another piece of art to keep along with the film. And social media has made work like this conducive and viable," she says. Poster of the film ‘An Insignificant Man’

What can you have in the poster of a documentary on Arvind Kejriwal but the Delhi chief minister himself? But the obvious and the literal was never an option for independent visual artists Svabhu Kohli and Viplov Singh. They tried a number of ideas, including an abstract one of a dragonfly with worm-eaten wings, before locking the final poster ahead of the film’s premiere at the Toronto International Film Festival last September: They settled for an image of a busy street.

The scene seems straight out of an election campaign, featuring policemen, leaders and workers of political parties and passers-by. The image evokes the Mughal miniature paintings in its flatness—including different scenes in the same frame, and with disregard to proportion.

Some may recall the paintings of the late Bhupen Khakhar, given the vibrant and colourful depiction of street scenes. As it happens, a segment at the Khakhar retrospective held at the Tate Modern gallery, London, last year, about the “depictions of ordinary men that he (Khakhar) encountered during everyday life in Baroda", was titled The insignificant man.

Kohli and Singh, who sometimes work together, say the directors, Vinay Shukla and Khushboo Ranka, didn’t give them a strict brief, asking them instead to come up with their interpretation of the film. “We wanted to create the mood of the Delhi elections in 2013 where two giant political parties were being challenged for the first time in years. After watching the film, we felt a whimsical stylistic approach would be interesting," says Kohli.

Working on the poster was artistically rewarding, allowing them to play with colour and characters. “With the illustration scene booming in India, and so much variety in style and aesthetic, people are realizing it can be brought into streams such as movie posters," says Kohli. Poster of the film ‘Newton’

More mainstream than the other films on the list, the main poster for Amit V. Masurkar’s 2017 film Newton has a conventional, if sleek, design featuring the face of leading man Rajkummar Rao. The alternative poster, unveiled before the film went to the Tribeca Film Festival early this year, is rather radical. It is Gond art in GIF format.

The poster, set in the remote areas of Chhattisgarh, merges the duality of the eponymous character with elements of the region’s folk art—with the signature winding patterns and the abundance of flora and fauna.

Tree branches seem like an extension of Newton’s camouflage military uniform. The title is an ambigram, a kind of typographical design which retains its meaning when read from the other side. The format of a playing card and a GIF are in harmony with the idea of duality, allowing us to see the image in more ways than one.

“You pick a style that is most in correlation with the movie," says Hazel Karkaria. She created the poster with Somesh Kumar at their Bengaluru- and Ahmedabad-based design firm By Two Design. The idea of using Gond art came from Jahan Singh Bakshi, creative marketing strategist at Drishyam Films, which plans to release the film in July this year.

According to Kumar, the piece is in line with posters from Mondo, which commissions contemporary artists to create limited-edition movie posters. Kumar graduated from the Srishti Institute of Art, Design and Technology in Bengaluru. He sometimes conducts jury assessments there, as he did on fellow graphic designers Kohli (of An Insignificant Man) and Agarwal (of Thithi), who were four years junior. He believes an increasing number of posters are being made today with a more design-centric approach. “It reflects how much sensitivity is shown towards title design, photographs," he says.