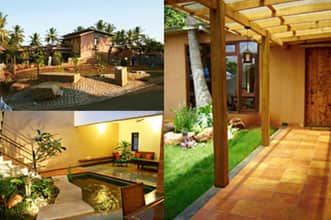 Good Earth Orchard, Bangalore: This enclave of 29 homes, built according to the principles of low-cost architecture made popular by British-born Indian architect Laurie Baker, has at least 250 species of medicinal and flowering plants. The development features an anaerobic sewage treatment facility to manage all refuse generated by the community, producing biogas to power various amenities.

T.S. Ananthu is the founder of Navadarshanam, a small community 50km south of Bangalore along the Tamil Nadu-Karnataka border. One of seven families living here, he came 18 years ago and particularly enjoys the sharing of resources such as energy and water. As a group, Navadarshanam residents focus on “ecological and spiritual regeneration", says Ananthu.

Also Read Back to the basics 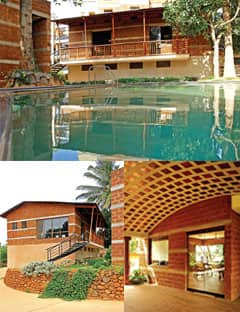 T-Zed, Bangalore: This 100-apartment development draws no water from the state water board, treats all sewage within the campus and uses a network of 44 open wells to generate drinking water for the 68 families that now live in the enclave. A common restaurant, with a kitchen garden on its roof, evolved a trend for on-campus urban gardening that has given many residents their own private kitchen gardens.

They even work together. “We generate our power using wind, solar and biodiesel sources. Water is drawn from an open well and a bore well. In the kitchen, we use gobar gas (biogas)," he says.

Trans Indus, a 10-year-old development near Tataguni village, approximately 20km from the city, comprises 42 acres of farmland where 18 families now live permanently (a total of 55 families own plots here). Farmhands from neighbouring villages are employed as gardeners, creating a pool of trained staff who also double up as domestic help. S. Nanda Kumar, president, Trans Indus Residents Association, says, “We encourage all residents to pick their domestic help from this pool. The locals feel connected to our enclave and this can minimize the aloofness of a gated community."

In south Bangalore, Good Earth Orchard, an enclave built using principles of low-cost architecture, will be ready for occupation later this year.

It could be concern over dwindling water, a warming planet or just a yearning for companionship, but a growing band of city dwellers are choosing homes that highlight greener community living.

Real estate costs can be attractively low if the project is well outside the city limits; suburban property prices seem commensurate with the norm for the locality (see KNOW below). Facilities may include zero-sewage outflows, use of greywater for gardening, replenishing of groundwater, flowering trees and medicinal herbs, and most of all, the advantage of living close to people with a similar world view.

“I am not particularly concerned about the carbon credits that the project might draw: That can work in the background. What I am looking for is a model that demonstrates a different way of living," says Nair, who says T-Zed is a good halfway home as he sets out to fashion an ecologically sensitive lifestyle for his future.

Navadarshanam, Tamil Nadu: This 115-acre site, once a barren wasteland, now has around 30,000 sandalwood trees and plants that have come up on their own. The development features buildings constructed from sun-baked mud blocks, a solar-powered flour mill, a biogas plant, solar panels, wind turbines, fruit and flowering trees and a common kitchen. There are no TVs, air conditioners or fans; there are, however , wireless phones and Internet access.

Most such community living is based around a green agenda, which can range from decorative landscaping to serious afforestation exercises, providing information and contacts to help residents move towards a more natural, chemical-free lifestyle.

Since 1994, Biodiversity Conservation India Ltd (BCIL) has been working towards such communities. “We began with Greenfield projects, such as Trans Indus and TownsEnd in Bangalore, Wildgrass in Mysore, where we worked on the outskirts of a city to create green homes," says Chandrashekhar Hariharan, CEO, BCIL. But 10 years down the line, the BCIL team realized that to truly propagate eco-friendly living, they needed to convert the brown areas within cities into green residential ones, not convert farmland into plots for homes. Out of that philosophy was born T-Zed. “This is the first residential campus in India which is acquiring certification for carbon credits for not only the campus but also for its residents. Every resident stands to gain about Rs12,000 on an annual basis, thanks to carbon credit savings in T-Zed," says Hariharan.

The residents’ association at Trans Indus planted about 120 trees, all species native to the area, over the past year. “All vegetable waste in individual houses is composted and all plastic refuse is pooled and disposed of collectively by the association," says Nanda Kumar.

At Orchard, developers Good Earth will manage the property for the first three years, setting up an anaerobic sewage treatment facility. “To ensure that this plant works efficiently, we will educate residents to minimize use of chemical cleaning agents that kill bacteria," says Jeeth Iype, founder, Good Earth. The developers will also source enzyme-based cleaning liquids and non-phosphate-based detergents for all residents. “The biogas generated by the integrated waste disposal facility will be used to power street lights, club house(s) and perhaps additional amenities, such as a heated swimming pool," says Stanley George, co-founder, Good Earth, who will live here himself.

Getting the neighbourhood involved in its own sustenance is a conscious aim at some of these gated communities, as is the case with Trans Indus’ domestic help pool and Good Earth Orchard’s intention of engaging local farmers in reviving the highly polluted river Vrishabhavathi that flows close to the property.

It’s not just residents who look to change the community. It is hoped that the community will also educate the residents and help integrate them into a larger community ecosystem. Inviting experts to share know-how on sustainable lifestyles will be a major feature at Good Earth Orchard, for instance.

“We will have biodiversity consultants who can show residents how to grow and use medicinal plants and use eco-friendly materials in everyday living," says George. It also intends to host “open days", exhibiting these aspects of eco-friendly community living for guests.

Sharing community resources began early at T-Zed: Even as the buildings were being constructed, BCIL’s landscape consultant Shobha Devi was working to create a model for urban agriculture. On the rooftop of the common restaurant, the team packed mulch and soil in used cement bags, planting gourds, lentils and seasonal vegetables in them. This produce was used in the common kitchen which fed nearly 200 people a day during the construction period.

“That tradition has now been taken forward to create private kitchen gardens for most residents," says Devi, who uses a 2-acre plot at Trans Indus as a pooled multi-community resource: a plant nursery. “We have saplings for trees, vegetable plants and organic seeds that we grow here and then offer to all residents on BCIL campuses," she says. Tips on reusing greywater from kitchens and washing machines and on improving soil quality are also part of the consultancy offered by the developers for residents keen to green their terraces and balconies.

The cost of living in an eco-friendly residential community:

• Maintenance fees: Rs25,000 for the first three years (during which developers undertake maintenance).

Students will work on several projects during CeBIT to make IT “more human". Approximately 4,100 exhibitors will present the latest developments at the fair, on till 8 March.